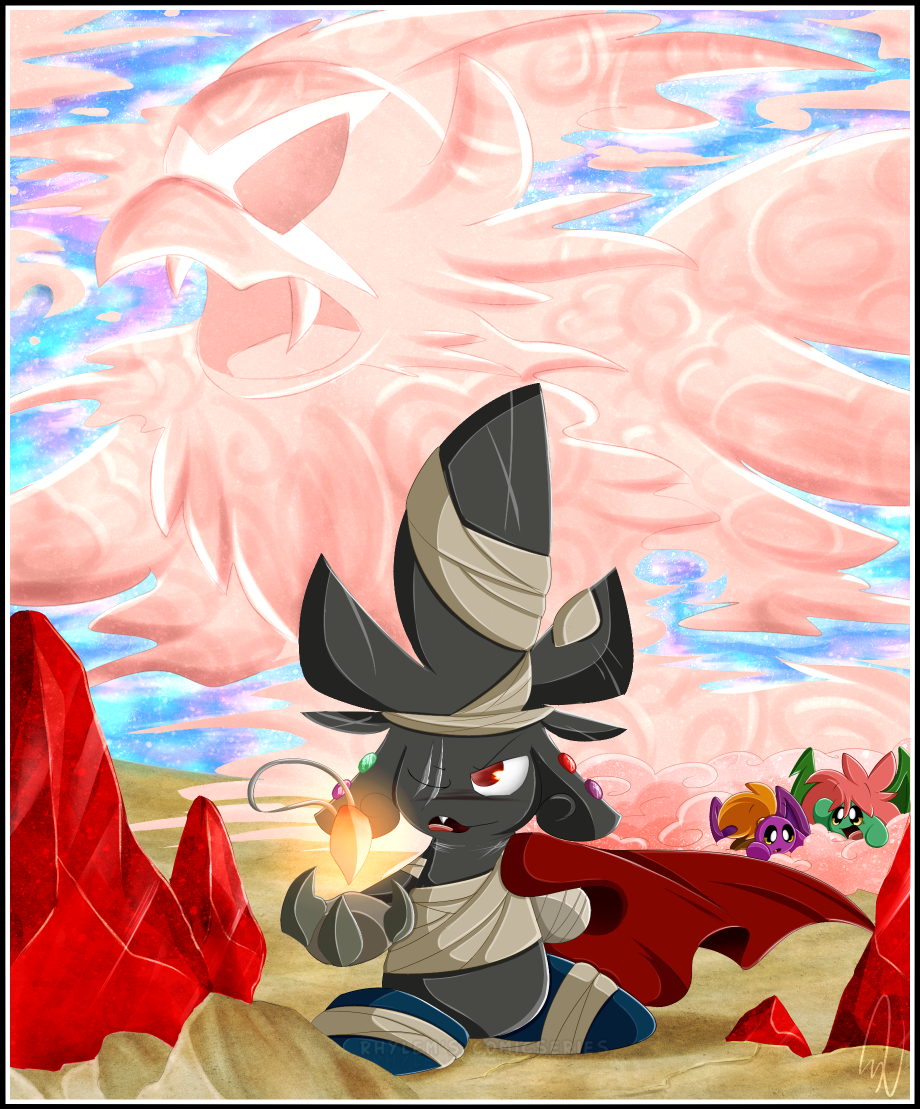 ​For the most part, Falspar and Dragato didn't have time to process what happened. The last thing they remembered before being covered in a soft, almost velvet like material, is scrambling to find shelter from the demon that was chasing them. They desperately tried to wedge themselves in a small cavern to shield themselves, but the pair couldn't outrun the beast closing in on them. Before it had the chance to devourer the two, something swept them away in the blink of an eye. As quick as lightning, the two found themselves several feet away from the creature. Both were bewildered to say the least as none could comprehend what just happened.

“Are....we alive?" Falspar finally spoke, trying to push himself off of the cloud like cushion he was on.

"I..think so..." Dragato said, looking down and poking the material in question. "But what is this thing? It sorta looks like a cloud..." He said as he prodded the pink object once more.

“It feels like a cloud…” Falspar said, mimicking Dragato as he poked and pulled the cotton like item as well.

“That’s because it is a cloud, now stop poking it or you’re going to fall!!” An angry voice barked at them.

The two warriors immediately recognized that voice, and gazed up at the figure now standing in-between them and the monster. Red cape, many bandages adorning his body, and to their surprise- without his helmet.

“You two can't even imagine how much trouble you're in right now.” He ignored their cheers and glared at them like a parent scolding their children. "Didn’t the first encounter with this monster knock any sense into you? What were you two thinking, you could’ve died!!”

“I know, but…we just wanted to see you. We’ve missed you so much." Falspar spoke, completely disregarding the fact he was almost eaten a second ago.

If they weren’t in the situation they were in right now, Gravel would’ve found his comment quite wholesome. Instead, he scolded the pair for even thinking of venturing into the canyons alone and unsupervised.

“Once we’re done here you better believe there’s going to be serious consequences for disobeying Ramset’s orders.” He huffed, facing the creature that began eagerly scraping and clawing the floor at Gravel.

“And you! I’ve just about had enough out of you” He pointed to the lizard as he reached for the item around his neck. “You made the grave mistake targeting my students!! I’ll give you one chance to leave this area before it becomes your grave.”

“Dragato, what is he talking about? There’s no way Teacher Gravel can take him on…” Falspar whispered.

“I don’t know, he’s not even carrying his weapon. Maybe one of the other teachers are on their way. He could be a distraction.” He replied.

“HEY! I can hear you parasites talking, y’know.” He shouted. “Why don’t you two keep quiet and watch. Just because I’m injured doesn’t mean I can’t fight!.”

Gravel waited to see if the creature would heed his warning and leave, but to no one’s surprise it began charging towards him at full speed. Falspar and Dragato gave out a scared yelp, and sought shelter in the makeshift cloud while Gravel stood his ground and raised the item in his hand.

“You two know nothing of the struggles and hardships I’ve been through throughout my life. How much I’ve lost, and what I’m willing to do to protect those close to me now.”

A fang. A lone fang dangling from a thin piece of cloth softly glowed in his hand. The image of a dear friend he once had, a partner whose life ended far too soon, burned in his memory.

From above, the clouds above took shape and soon bore the resemblance of a creature not familiar in their eyes. The two gasped in awe, not even paying attention to the Demon Beast now stopped in its tracks.

Gravel gripped the worn fang tight, and held it close to his chest. “Old friend, please give us protection to those who wish harm on us."

A flurry of pink and red moved as soon as he spoke. It was as quick and fluid as the wind itself; passing Gravel and his two students in a powerful gust as it descended from the sky and towards the massive Candlemander. The cloud shaped dragon opened its mouth and devoured the creature whole- leaving behind nothing but a large pile of bones. As soon as the threat was gone, the fang in his palm began to lose its glow, and the clouds around them faded into a pink colored mist that covered the canyon.

Dragato and Falspar gave a cry once the cloud they were sitting on disappeared, and they hit the ground. They recovered quickly and ran to Gravel who was now sitting on the floor catching his breath. Once they reached him, the three all locked eyes with one another in silence. Being the first time seeing them without his helmet, Gravel shyly turned away to avoid eye contact. Part of him is still hesitant opening up. Even if they saw him earlier, that was during a completely different scenario as they were in danger, and he didn’t have time to care about how he looked. Now that the threat is gone and they’re all alone, he couldn’t help but feel weary.

“Teacher Gravel!!!!” The shouts and cries of his students hugging and clutching him for dear life suddenly awoken something within him.

He feels embarrassed, but happy.

A shaky hand rose and placed it on the head of the one closest to him. Falspar looked up with tears in his eyes, and a concerned frown on his face.

“I’m fine…” He said, patting his head. For the first time, they can see him smiling. A small, weary smile, but a smile nonetheless. “I’ll be fine.”

He doesn’t know what else to say. He feels like maybe he could’ve said more if he had his helmet on. Wearing it makes him feel different- stronger, more confident.

“The cavern isn’t too far away. Let’s head there and rest up.” He spoke, and set the pair down as he struggled to stand. "I’m already sure Ramset is on his way…"

“Will you be okay?” Falspar asks.

“Yeah, I’ll be okay. “ He gives a nod as he takes his first step towards his house. He falters a bit, to which Dragato and Falspar cry out in fear. He quickly catches himself as he stands back up. Again, he moves- tall, unshaken.

“Don’t worry yourself over me, you parasites. I’m good.” He reassures.

“I’m sure, now get moving you two.” He speaks, corralling them back to his den while they go off in a tangent how awesome he was.

Sure he’s in tremendous pain throughout the entire way, but that doesn’t stop him from smiling through it all.

EEEEE!!!! I'm so happy, I can't believe how much my little Gravy bowl has grown. The grumpy roach is now a protective, super awesome hero~!! ^o^

The story itself has technically ended, but there's one last illustration to this story. It's just the ending card, but I can't wait to post it!!! SUPER FLUFFY ADORABUUUNESS!!!

Okay so just to clear some things up-

Yes, Gravel is a Zoos. Look hard enough in this illustration here and you'll see some early concept art of him. >v<

So I have a VERY important headcanon about my Bukiset/ Zoo species in GW. So if you want to learn more, please ready below! Please note, though, that there will be some disturbing, and upsetting content. I will put a warning label before you get to it.

But okay! Let's jump into it!

Gravel's kind are Zoos. In the lands of North Nova, their ancestors were gods of the sky. Very spiritual, and peaceful. Their partners AKA animal companions were Landia. Bonded for life, Zooz and Lania lived in harmony for centuries. This relationship slowly ended over the decades when Zooz slowly became earthbound. They're not as spiritual as they once were, and became much more aggressive and violent. Many of them starting wearing masks to cover their face, and take shelter in the burrows below the sand. Eventually all Zoos took on this appearance, and renamed their kind Bukisets.

With Bukisets becoming earthbound, and Landia still the gods of  the sky, the two lost their spiritual connection with each other over the decades. It's important to note that Landia are peaceful creatures unless threatened. If you attack one, they will attack back out of defense. So common sense says to leave these creatures alone.

Unfortunately, there are some who does not heed this warning. An attack on a young Bukiset causes the near extinction of their kind. This young Bukiset who was attacked is named Orzon. (Who will later be named as the Dragon Slayer of North Nova)

If you need to brush up on your GW lore, Orzon is Gravel's dad. He is responsible for killing almost every Landia in North Nova because of that attack when he was a kid. He hates Landia and wanted to set an example for anyone who dares threaten him and his kind. 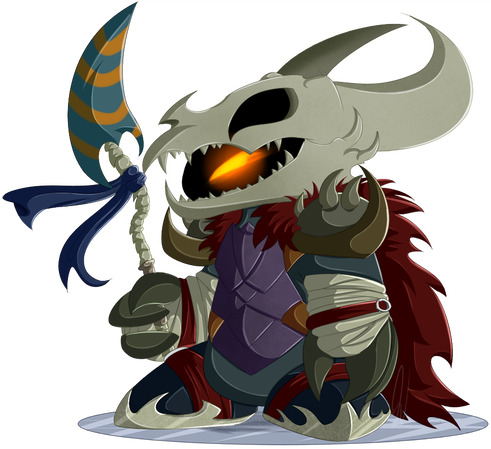 Okay so now comes to the messed up part that relates to the Illustration of Gravel and the Cloud Landia.

Gravel once had a pet Landia. While not mentioned, it was slightly hinted when he was carrying a plush of it here in - A Series of Reunions Page 22 & Page 23. Landias were already quite rare as it is, and Gravel miraculously bonded with one. (Meaning, he has high spiritual energy, even as a child.)

Again, if you haven't brushed up on GW lore, then sad info ahead- Orzon hates Gravel because of the blood ruby incident. It was mentioned greatly in Chapter 2. (And if you look close enough in the illustration above, you'll be able to see the scars around Gravel's neck.) Once Orzon found out his son bonded with a Landia, he made sure to set a VERY painful example for Gravel.

Orzon not only killed the Landia on the spot, but he forced Gravel to watch him eat his companion during dinner. This traumatized Gravel, and he blames himself for the death of his friend. The only thing that was left is a fang that Mara saved. (Mara was unfortunately the one who had to cook the Landia  for her father, but saved a small piece of her for him.)

Gravel cherishes this item deeply. It's his most prized possession to this day. He keeps it hidden away, and has never told anyone of the incident.


Okay, so back to my Zoos headcanon. If you look closely, they all wear a necklace. Their energy is stored in said necklace which enables them to summon their ability/attack.  Different elements use different items. Since North Nova Zooz bonded with Landia, a part of them is used as a necklace (Fang, claw, horn, scale) Gravel is one of the few who is still able to harness his ancestors ability to form clouds AND use it as a weapon.

His love for his fallen comrade takes the form of the clouds above, and it will protect Gravel on command. This is a VERY special attack, and Gravel will not use it unless someone he deeply cares for is in danger. The main reason he doesn't use this attack often is due to the fact he thinks he does not deserve protection. He let her get killed, and he feels guilty for not being strong enough to protect her. Obviously it's not Gravel's fault, he was just a toddler when it happened, but that day still haunts him.

Anyways, I think that's all I wanted to cover. If there's anything else I'll likely add it in future illustrations. I have A LOT of Gravel art ready to be posted. I hope ya'll Gravel fans are excited!!! ^o^