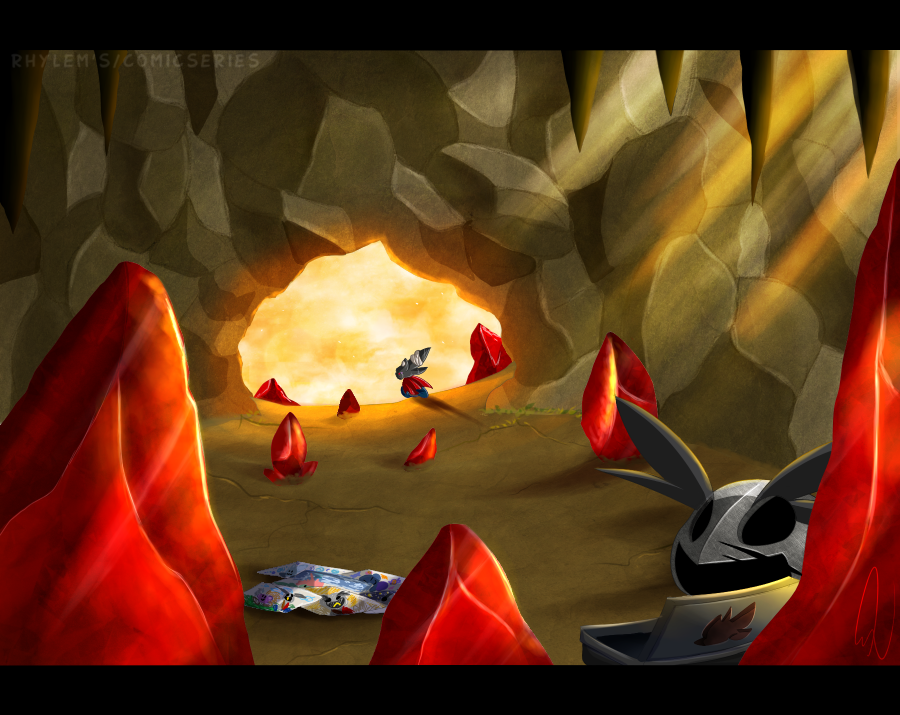 ​
​Gravel woke from his slumber when he heard the loud echoes and roars of rock and stone crashing down the side of his cavern. It wasn’t uncommon, and although he’s been living in the canyons for well-over a decade, it was one of the few things that always causes him to wake up. It’s one of the small downfalls of living in the secluded canyons of Kalmari, but overall he can’t complain much. He enjoys his privacy. While he doesn’t mind visits from Ramset and his two students, Gravel’s been living a life of solitude for many years before he met Ramset. One can’t just break from it so easily, so he continues living in the canyons. Recently, however, he’s been slowly easing out of his hermit life.

Truth to be told, he’s been enjoying the company during his recovery- and yes, that includes his newly appointed nurse, Alba. She’s the main reason why he’s allowing visitors much earlier than expect- way before he’ll be allowed to wear his helmet again. Part of him is nervous, but there's a small part that is truly excited. He wants to finally open up to everyone. He wants to rebuild friendships that were burnt long ago, and to have the opportunity to spend more time with his students. It’s not going to be easy, and something like this is going to take much time to get used to, but he is ready for it. Come next week, he'll ask Ramset to bring Dragato and Falpar over. He has a hunch they are just as eager to visit as ever- the countless letters and drawings next to him are a daily reminder at this point.

But for now, he can't do anything but rest. Settling back down in a makeshift bed Alba and Ramset helped make for him, he gave a small yawn and tried to get a bit more sleep before Gordon and Alba arrive. A small smile formed on his face when he made contact with the plush, soft blankets and pillows. Dirt and soil is nice, but Gravel can certainly say it isn't the best thing to sleep on when dealing with several broken bones. Maybe he’ll continue using it after the fact.

As Gravel was beginning to drift off to sleep, a faint echo caused several of his frills to twitch. He recognized the roar belonging to the Demon Beast he faced off earlier that month. His body couldn’t help but ache with pain as he shuffled deeper within his blanket. Nova knows he’s going to have to take a different route from now on to avoid future confrontation with the beast. In fact, maybe it would be for the best if he didn’t allow Ramset and his students to come by as often. The last thing he needs is one of them getting hurt as well. If Gordon or Bate would supervise them on top of Ramset, then possibly.

Still, he’s quite amazed and equally perplexed how a lizard the size of a common string bean could grow to the size of a building. The fact he never encountered it after all these years is equally baffling. Surly with all the exploring he’s done throughout the canyons he would’ve ran into it at least once. It was quite strange, to say the least.

“I guess I’ll have to start visiting town more often…” He mumbled, as he let out another yawn. “I’m sure they’ll get a kick out of that..”

Gravel smiled at the thought as he drifted back into his slumber. The cave is quiet aside from droplets of water occasionally falling into the lake besides him from the stalactites above. It never bothers Gravel in the slightest, he actually finds it quite peaceful compared to the landslides, or cries of various demon beasts fighting, or-….

Several faint voices called out. Voices which Gravel instantly recognized. Voices that didn’t cause him to sit up, but practically jump out of bed once he heard them. The students he’s been so eager to see since his recovery were somewhere in the canyons. Why were they here, did they beg Gordon to take them along? Or worse, were they alone? Gravel didn’t have time to sit around and ponder as the sound of their voice clearly indicated they were in trouble. He was still in excruciating pain, but that didn’t stop him from forcing himself to his feet to come to their aid. If those two really are by themselves, then he knows he’s the only one able to protect them.

Though for someone who sustained severe injuries, it’s easier said than done. Gravel yelled out in agony when he put pressure on his leg, and collapsed to the floor not even a moment later when he tried to run. He clutched his side in pain from his broken ribs as the pain became too unbearable to move.

Again, another cry- this time for help, echoed through the cave. Hearing their terrified voices only fueled Gravel to fight through the pain.

With tears in his eyes, Gravel forced himself up and limped next to one of his ruby pillars near his bed. He isn't strong enough to do this alone, he’d be nothing but a burden, if anything. And carrying his lance is next to impossible with his broken arm. Out of options, Gravel was left with no other choice. He quickly rummaged though all of his belongings; tossing aside various weapons, possessions, and his signature helmet until he finally found what he was looking for. It was an old box, navy in color with a red insignia in front. Gravel practically broke the hinge off of it, and placed the item in question around his neck before struggling to run out of the cavern.

Being out in the open while injured, and without his main weapon or even helmet for that matter couldn’t help but make Gravel feel vulnerable and weak. He gripped the item dangling around his neck and begged for this to work. Even when he is fighting alongside Ramset for the past decade, he never had to go to such measures to use this item. In fact, Ramset doesn’t even know about it- no one does. It’s considered not only his trump card, but something he personally never wanted to show anyone.

He doesn’t have much of a choice now, does he? He cares too much about those two to put his needs first.

“Though that won’t stop me from grounding those two for the next 20 years…” He huffed as a small flicker of his parental side started to surface.
​-The End-
<< Chapter 3 | Chapter 5 >>
​Artist Comment:

​Hard to believe when I first introduced Gravel he was a mean, bitter roach to Meta and his comrades,  but now he's out risking his life despite his injuries to save them~!! ^o^ Go Gravel, go!!! Protect those precious little beans of yours. <333

The next chapter WILL reveal his unmasked form. I actually have the illustration ready now...but the writing isn't done. XDDD So it's on hold until I get it done~!