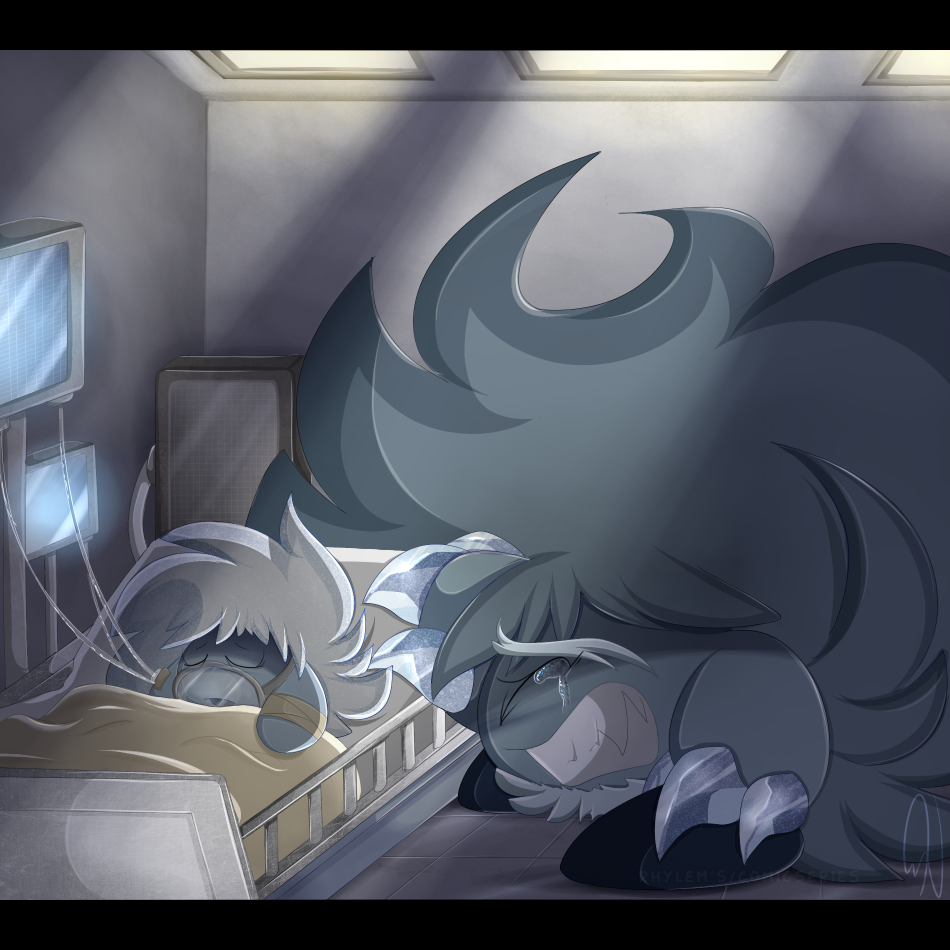 The Broken Promise
Wulfric
​
​Time loses meaning to him.

There was a point in time where it could flow fast or slow, depending on the occasion. Memories etched into his mind, happy, boring, everything in between that went with the rising and falling sun. Time was a concept he understood, albeit could hate at some points.

In this hospital, time just...doesn't exist.

How long has it been since he's seen Arthur? Since he came to give him words which even now cut deep to the bone? He doesn't know. Arthur hasn't left, and there are others, Atticus and Petta, but...he can't remember where they came from.

He can't remember much of anything beyond what's happening now.

His wife is the strongest person he knows. And now look at her. In a hospital bed. Asleep.

He...isn't able to see her much. He wants to, and when he gets the chance, he /does/, as much as he's able, but it's like she's frozen herself over. Unmoving and still in her hospital bed, asleep peacefully and- fading. No matter how cold the doctors keep her surroundings, no matter how much they've managed to try and stabilize her. Nothing.

It's a waiting game at this point. Wait.

Meta stands at her door and...waits. Uncertain of time, and uncaring.

He doesn't know if he's really existing at this point. With no Kes, there is no Meta either. It's as factual as the color of the sky. Tasked with protecting her, he's failed at that duty, failed as a husband and father - his son, his second son, weak in the hospital, fading day by day. Both of them, dying, and Meta can do nothing about it.

It's a mantra at this point. He lets it consume him because he deserves nothing less for doing this to them. Nothing less.

Standing there listlessly, staring at her hospital door, he feels it in the wind but fails to recognize it until he sees the way his breath fogs. Until he feels the way his skin prickles and his hands start to shake. And he knows.

He looks over just as the doors to the hospital wing start to freeze over, ice crackling through the wood and windows, spreading across the floor, a sense of something in his stomach that he cannot or does not wish to name embedding itself in his chest. And then the doors shatter, shards and debris crashing through into the hall unceremoniously.

Wulfric, in all of his glory, larger than Meta would ever be, steps forward, two warriors of South Nova flanking just behind him on either side. He says nothing at first, no screaming or yelling as he makes his way over to Kes' door. Meta automatically backs up without thinking of it. His eyes are unreadable. His warriors angry, yes, but silent.

For a long time, he says nothing. Staring at the door as his warriors take up post on either side, face shadowed by his hair and hands fisted tight.

And then he speaks. Back turned. Voice broken.

"You were supposed to protect her." He doesn't flinch. Doesn't move. Frozen. "I was wrong to trust you."

Meta says nothing. Watches as Wulfric steps forward, opens the door. And leaves him alone.

He does not recognize her.

His daughter is always one to lead the way. She never rests, never lingers. Full of life, full of energy, so at odds at times with the frozen wasteland that surrounds their home.

This is not his daughter. Limp, lifeless, surrounded by metal contraptions such that he can hardly even see her form through it all.

Wulfric, so confident and secure, steps forward only because he must, soft and tentative steps that carry him closer to his child much as he might not will it, afraid of hurting her with his mere presence. She looks so peaceful as she is right then, expression lax in rest. She could just be sleeping.

He could not believe it when he first heard from Kirby and the medical staff. Refused to. But now, seeing her there, the truth of it...

Wulfric is not known as one who sheds his emotions easily, not with the burden of Chiefdom on his great shoulders. But there is something that shatters within him when his hand reaches out close enough to feel the strands of Kesuk's hair. His Kesuk, the little ice cube who he may never see awake again.

The tears come and won't stop. Tears that Wulfric hasn't shed since the death of his wife, tears that soak his face and drip down onto the stale white linens of the cot in which his child rests.

Wulfric cares not, only strokes her hair as if it were the most fragile thing in the world. His child, on her deathbed when it should have been him ready to take his place in the afterlife. His child, who should have grown old, and he at rest with his wife.

It isn't right. A parent should not have to see their child wither and melt away. It was against the natural order of things. It can't be. He can't bear it. Not after her mother.

He's supposed to protect her. But he couldn't even do that. And now...

Wulfric swallows bile in his throat, the shattering cry that works its way and fights for release. "Please," He whispers, begs to all of the gods because there is nothing else he can do, "take me instead. It isn't her time but I am ready. I would gladly go, just-- please, /spare/ her..."

She's all he has left. Without her, he doesn't think he could go on. Already, the weakness sinks into his bones, the spirit that gives every life the will to fight beginning to fade. No wife, no daughter...

If she dies, so will he.

He's supposed to protect her. But now, laying here, only she with her iron will and strength can save herself. The only thing he can do is have faith. Hope. As hard as it is to hold on to.

"I have every faith in you, Kesuk." He murmurs, hoarse and tired, but. Not quite broken. Not yet.

He sits down on a chair made of ice. To watch. To wait. 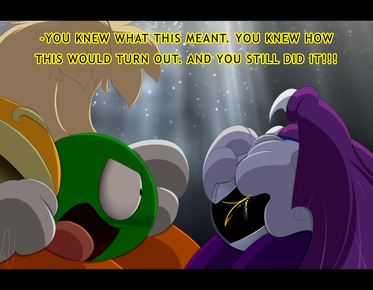 We got Arthur's POV of it, but what's going to happen when Wulfric finds out her only daughter is fighting for her life? ;A; Kirby is the one who traveled to South Nova to inform his Grandfather. When Wulfric got notice from one of the guards that Kirby was in the village, he immediately becomes excited since that means his daughter is visiting!

Since South Nova is isolated from the rest of the world, Wulfric doesn't know when they're going to visit. Usually they visit on certain holidays or on Wulfric/ Kes' birthday, but when they arrive unscheduled, it's a nice little surprise for Wulfric! He get's quite excited since Kes only visits a few times out of the year.

When Wulfric receives news from Kirby that she's in the hospital in Kalmari Town, practically on her death bed after giving birth to a child he wasn't informed of, the old Chief runs all the way from the Village to the hospital without stopping once. Several guards and Kirby follow behind, but couldn't keep up with Wulfric's speed.

When he finally makes it to the hospital, he disowns Meta and tells him it was a mistake putting his trust in him. He then enters Kes' room and doesn't come out until she either wakes up, or passes on.
​
Wulfric has lost a lot in his life. He lost his parents as a child, and he also lost his wife, Galcine. You can see below the struggles Wulfric had to endue while being a single father AND taking on Glacine's role as the new Chief. So with everything Wulfric's been through, this is his breaking point. Wulfric knows if Kesuk passes, his will to live with slowly dwindle and fade. He can come to terms with the loss of his parents, and while he struggled greatly with Glacine's passing, he's learned to cope and live with it as well. But his only daughter? His precious little Ice Cube?