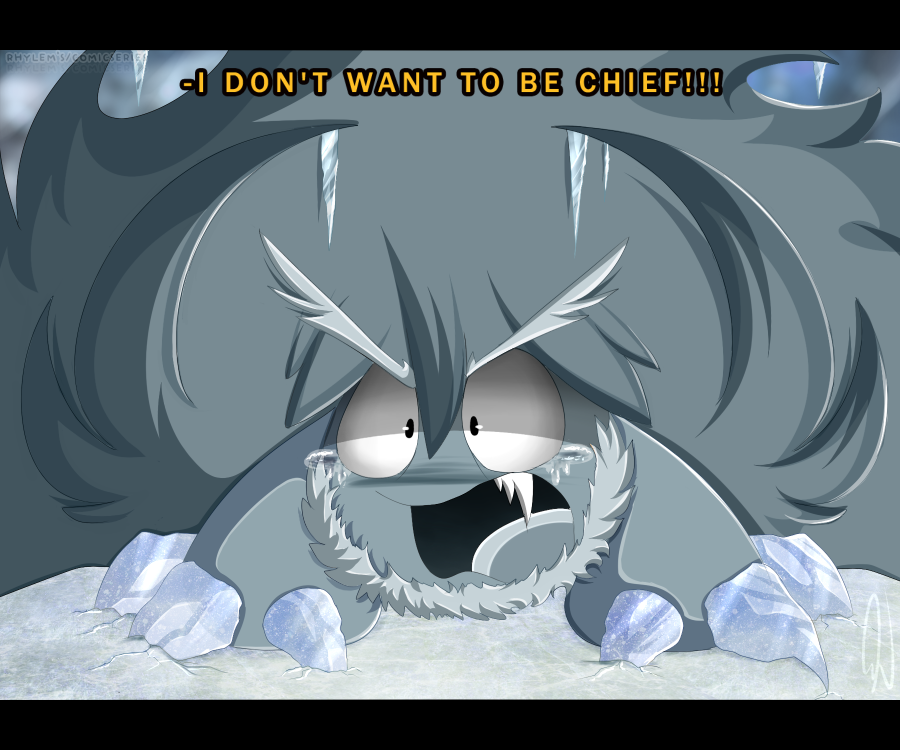 Next in Line
Wulfric

​
Wulfric continued to scowl at Frost, the retired but still well respected chief of their village, from across the table. His cold, furious eyes would've caused anyone to become uneasy, but not him. Frost wasn't affected by it one bit. He continued his rambling and protocol; informing Wulfric what's to come in the following days. Frost was professional, and never let his emotions get in the way of what needed to be done. Wulfric didn't care. He hated Frost. He despised him with every fiber of his body. How could he act like everything is okay? Why is he behaving like this is just another day in the village?

"Okay, that just about covers it." Frost's voice rose just a bit louder to get his attention. "Are there any questions?"

To this, Wulfric stood up and slammed his hands on the table. "Yeah, I got something to say to you, alright!" He lowered his head and glared daggers at the other. "What happens if I refuse?"

"There is no refusing this, Wulfric." His voice was calm like before.  "Come tomorrow, you will take on Glaciene's role as the new chief."

"And like I said before, if I refuse?" Wulfric bit back just a bit harder than before as his temper started to rise from Frost's unmoving and quite frankly annoying demeanor.

Frost took a moment to contemplate before finally standing up to head towards one of the windows behind him. Wulfric couldn't easily read his thoughts like before with his face turned.

"Wulfric." His voice sounded even calmer, if possible. "Would you like to talk about it?"

The Leo stepped back in surprise. Did....his words finally get through to him? Did he finally break? No...no....Frost was never like that. NEVER. Ever since he met the man he was cold and uncaring towards him. Even after all these years, nothing about him has changed. Wulfric's eyes narrowed, not amused by his father in-law's false sense of compassion.

"After everything that's happened, NOW you want me to talk about it? How about you?!" His voice snapped with a loud crack. "You're making it seem like this is going to be so simple! Like I'd accept the role with a smile on my face, open arms and everything will be okay!"

Wulfric's claws started to dig across the table as he unleashed his fury at the elder.

"I DON'T want to be Chief!!! And I DON'T care what you think about it, and I certainly don't give a damn what the village thinks, got it?!!!"

He gave several huffs to catch his breath, unaware Frost was turning around. Wulfric didn't have time to react when the elder placed a firm grasp on his face. Sharp claws digging at his skin, Wulfric was now at the mercy of Frost.

"That's enough out of you, boy." His words came out much harsher, and less forgiving. “My daughter, if only for a few years, was a strong leader the village looked to for strength and guidance. A pillar of hope born from a long line of rulers before her. I will not have you destroy what she built because you’re unable to control your emotions.” He released his grasp, “Wise up and stop acting like a child.”

“A Child…?” His body and voice trembled, the urge to strike him with all his might was getting harder and harder to control. “MY WIFE IS DEAD!!! How do you expect me to control my emotions when I can't even get a damn minute to myself to say goodbye!!! All you ever think about is the wellbeing of the village, you’re more concerned about everyone else than the passing of your own daughter!!!"

“I’ve said my goodbyes, and it’s time you do as well.” His voice, blunt and sharp. “She’s dead, so quit sobbing and wise up.”

“Do you think Glaciene would’ve done the same if you died? Stop running the village, stayed in her office and cry all day? No. She would’ve moved on, and carried on with her duties!! It’s what we do, Wulfric! It’s how we’ve survived for this long! And you think you’re going to suddenly change how we live just because your heart says otherwise?”

“At least give me time to mourn, I'm not asking for an eternity!!” Tears fell from his face, but his plea fell of deaf ears.

“And we did, did we not? We held the funeral, we said goodbye, but today is a new day and we don’t have time to wait for you to get over it. In a few hours, we will hold the celebration of our new leader and you will rightfully take her spot as chief.” He stood firm as he waited his response.

Wulfric tried his best to stay strong, but something inside him snapped. The way Frost talked, the look on his face- cold, unforgiving, uncaring. He knew nothing was going to change his mind, and if that’s the case…..

“If being chief means I have to sacrifice what I believe in, then I’m leaving the village. I don’t need you, or this place! Go find yourself a new leader, because I want no part of it!!” He declared rather proudly as he turned away to leave.

“I had a feeling you’d say that…” He sighed, and spoke right before he was going to walk out. “I have no doubt in my mind you can easily survive out there, but do you really want to put dear little Kesuk through that?”

And with that, Wulfric froze.

“Living in the wild, scrounging around for food, fighting Demon Beasts day and night….” He continued, “Will you deprive Kesuk the chance at a normal childhood just to fuel your weak ego? Will you tear her apart from the only friends and family she grew up with?”

“Don’t you dare bring Kesuk into this! You have no right brining my daughter into our affairs! You’re nothing to her, you hear me! NOTHING!!”

“You and I both know I’m just as much family as you are to her. I have the right to press concerns for my granddaughter's happiness, do I not? And believe me when I say there are plenty of suitable mothers that will gladly take her in if needed. I will not have my granddaughter ripped away from her only home. Is that what you want, Wulfric? To have your daughter grow up without a father? You didn’t strike me as the selfish type when it comes to Kesuk's wellbeing, unless I was wrong about you…”

Frost watched as the Leo stood in his place, not taking a step further out the door.  Wulfric’s posture eventually started to falter. Once an unbreakable pillar now reduced to a crumbled mess.

“You monster….” Was his only response to the elder Leo now towering over him.

“Names are just that, Wulfric-  names.” Frost took no offense to that and just walked passed the collapsed figure, and out the door. “Clean yourself up, and be ready in an hour. And don’t worry yourself about Kesuk, her grandfather will get her ready for the big event.” He paused for a moment before a smile slowly formed on his face as he looked at the figure one last time. "Oh, and Wulfric? Congratulations- I’m sure the village will be in good hands.”

Frost shuts the door behind him, paying no attention to the soft sobs his son in-law made soon after.

I briefly talked about Frost (The Father of Glaciene, and Grandfather of Kesuk) in the last illustration, and I wanted to talk a bit more about him. He and Wulfric share a nonexistent relationship. It's stated above that Wulfric hates Frost for reasons he doesn't care about anything other than the wellbeing of the village. Usually it's the opposite; rulers taking advantage of their people for gain, but in this Ice Leo village, it's the opposite. It's the leaders job to protect and ensure the safety of their people, and Frost made that his only priority to the point where Wulfric noticed he didn't even care the last leader (His DAUGHTER) died. He was only worried about getting another leader to fill her role.

If you're wondering why Frost doesn't pick another Leo when Wulfric refused, it's due to the fact he wants Kesuk to rule after Wulfric. You could say Wulfric is a temporary leader until Kesuk comes of age. Frost wants Kesuk to learn everything there is about being Chief while his father's in charge. When Wulfric threatened to leave the village, Frost used Kesuk to "persuade" Wulfric into staying. Wulfric loves his daughter, and Frost knew he could exploit that to get him into being Chief. Although Wulfric doesn't want to, he'll do it....only for the sake of his daughter.
Species © Nintendo/ HAL Laboratory
Interpreted characters created from said species © Rhylem