“I-I’m fine, really.” Bate waved his hand as he steadily held the pack of ice against his face to ease the swelling.”I…just…sound weird, is all- Like if my allergies were starting to act up or something...."

Atticus couldn’t help but laugh. Petta, who was watching from afar let out a giggle or two from his response. He knew Bate was trying to make light of the situation, and she really did appreciate him coming by again to see how Atticus was doing after the incident.

“You sound fine to me, Oujiii.” Atticus smiled and nuzzled his side.

“Well, I’m glad you think so.” He smiled as he took hold of the flowers that were waiting for him.

“So, where are you headed to now?” Petta asked, "I’m assuming your schedule is running a bit late due to today's, ah....scuffle.”

“I think I’m just going to drop off the flowers and head back home.” He stated, not really wanting to be seen like this in public, “I’ll finish my errands later on when I don’t sound so congested and my face isn’t so-“

“Y-yeah!” Attcuis agreed, and happily tugged on his wings, not caring how his grandfather looked or sounded “It’s almost time for lunch, don’t you wanna eat with us?”

“I, u-ummm….” Bate started to fumble with his words. He really didn’t want to be out until his face got better, but he also didn’t want to reject his grandson’s offer.

“Atticus, I think you should let your grandfather Bate finish up what he was doing and let him rest for the day.” Petta spoke for him when she saw the warrior starting to hesitate. Even with his blunt personality and grouchy exterior, Petta knew he could never say no when it came to his grand kids. He always had to rely on the parents to step in when they could, and Petta could sense it was one of those times. “Maybe tomorrow, okay?”

Atticus lowered his wings in disappointment, but eventually agreed with his mother. “O-okay….” He softly said, but quickly piped up before he left, “O-oh! But…could….I…walk with you to drop off the flowers….please?”

He wasn’t sure if Bate wanted the company, but being around the elder always made him feel protected. Even though his parents had never made him once question his safety, there was something about being with his grandfather that was different. He honestly didn’t know how to explain it. The only thing he could think of is that it was nothing like being around his mother or father.

Atticus watched as Bate reached down and gave him a small pat on the head. “That would be nice. Thank you, Atticus.”

The Leo beamed and eagerly held out his hands to carry the flowers for him in return since he was juggling the pack of ice in one hand, and his cane in another. He looked back and waved to his mother.

“Don’t take too long, Atti. Remember what I told you about letting your grandfather rest.” She reminded him since Atticus had a bad habit of prolonging when it came to Bate.

“I promise!” He cheeped and walked out the door when Bate opened it for him.


“Did you really plant this tree, Oujiii?” Atticus asked as he placed one of his hands on the trunk of the tree. A few blossoms rained down from below, and Atticus giggled as he shook his head to get them out of his hair.

“Before you, or even your parents were born.” Bate nodded and gazed up at the large plum tree. He decided to take a seat under it as he was quite tired from the walk. He motioned Atticus to sit with him, which the Leo gladly accepted since he was weary from the walk as well. He set the flowers in front of them and leaned against Bate as both took in the tranquil surroundings as they rested.

A few minutes passed and Atticus sat up when he heard a strange whistling sound coming from Bate. He already knew what was causing it, and a wave of guilt caused the Leo to slightly tense up. He carefully nudged Bate and with tears starting to form in his eyes, softly spoke.

Before Atticus had the chance to say another word, Bate used his wings to gently pick him up. Once he was safe and secure in his arms, Bate looked down at the quivering toddler.

“B-because I hurt you…..” He said as he lowered his head in shame.

“I don’t recall you ever hitting me in the face.” Bate tapped his chin, “Unless that hit really messed with my memory….”

“Not like that, Oujiiiii. You know what I mean.”

“Hmmm, I’m not so sure if I do.” Bate said, still adamant with what he said earlier, “You didn’t invite that giant crowd to your mother’s shop, did you?”

“And I’m pretty sure you didn’t force me to stand in front of the door moments before they opened it, correct?”

Again, Atticus shook his head and mumbled a soft ‘no’ to his grandfather.

“Then you have nothing to apologize for. Accidents happen, Atticus, so please don’t feel bad about what happened to me. None of this is your fault.” He said, and then lastly added to lighten the mood, "Besides….your father and uncles did much worse than just a bloody nose back in the day.”

Bate watched as the child giggled and hugged the elder. “P-promise you’re okay?”

“I promise.” He said, setting the child down and getting back up. “Now, how about I take you back to your mother, hm?”

The Leo picked up the bouquet  of roses and ran behind the tree where a lone grave sat. He gently set them down and looked up when Bate stood by his side.

“The roses are a bit damaged, do you think she will mind?” Atticus asked,

“Your grandmother was never one to nitpick about petty things like that.” He said with a laugh and started to make his way down the hill.

“Are you sure?” Atticus said, looking back one more time before catching up to the elder. “They really stand out from the rest…”

“Trust me,” He chuckled. “It’s the ones that stand out that really catch her attention." 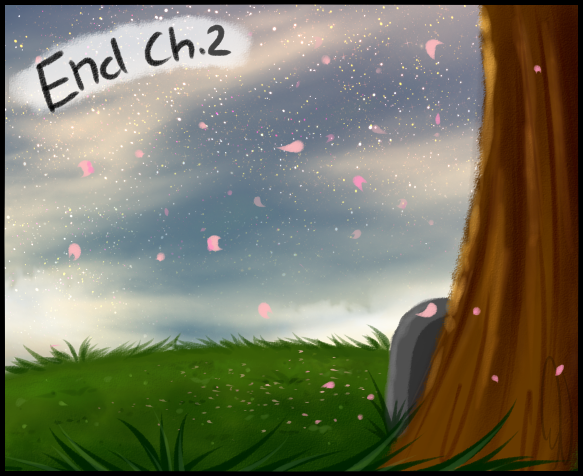 ​Atticus accompanies Bate to drop off some flowers. u////u