​“So, this is him!” A voice called as he spotted the small Leo behind the counter, “The son of Arthur!”

Atticus tried his best to smile back from the response. Even though he never liked to be called that, the last thing he wanted was to lose a potential customer for his mother. Petta, who noticed his son starting to tense up, decided to intervene. Unlike him, she didn’t care if she’d lose a customer if it meant keeping his son safe.

“Ah- yes. This is Atticus. Is…there something we can help you with?”

“And look at that! The kid has wings just like his father!” He said, ignoring Petta and reaching over to touch the fluffy, feathery appendages. Atticus gave a small yelp and ran next to his mother for protection. The one thing he dislikes even more than not being called by his proper name was physical contact.

“Excuse me, but my son isn’t fond of anyone touching his wings,” This time, Petta wasn’t so lenient, “If the only reason you came by was to badger my son, then I suggest you leave. I don’t take kindly to those who treat him like some type of sideshow."

Attius watched as the figure blasted a few harsh words to his mother before finally leaving the store. He closed his eyes in fear when the door slammed shut, and clutched Petta even tighter.

“Atticus,” Her soft voice cut the tension, and he looked up with a timid frown. With a warm smile on her face, she picked him up and set him back on the counter. “Are you okay?”

He gave a small nod, “I…I’m sorry….”  He quietly apologized for causing the customer to leave,

“Oh, Atti.” She shook her head and gave him a small peck on the cheek, “You did nothing wrong. He was out of line for treating you in such a horrible manner, you handled everything perfectly.”

Atticus started to tear up and hugged his mother. All he ever wanted was to help his mother in the shop, but each time he does, someone would always waltz in and start harassing him. This caused Petta to get extremely defensive when they'd get out of line, and sometimes she’d have to use her fire to warn them not to heckle her son. Today wasn’t as bad, but it still shook him up quite a bit when he started yelling. He hoped to Nova he didn’t have to deal with another customer like that for the rest of the day....

The sound of the door opening caused him to break free of the hug, and Atticus dove behind the counter to hide himself. He kept quite until the figure spoke, but once he heard the familiar voice, the Leo quickly appeared to give him a hug.

“O-oujiiii!!!” He smiled and tottled over to embraced the elder,

“Atticus, it’s so nice to see you,” He smiled and lightly patted his head. He then reached under his pauldrons and placed a few coins on the counter.

“You know we have a strict policy of not charging family members.” She gave a small chuckle and headed to the back to get his usual order ready,

“Well, I have a strict rule of not accepting things for free.” He grabbed the coins and handed them to Atticus. The little Leo slightly giggled and put them in the cash register. Yes, his first sale of the day! Even if it was his grandfather, he couldn’t be happier.

“And here’s your order.“ Petta appeared moments later and handed him the bouquet of pink roses. Bate gently took them and thanked her. When Atticus saw him heading to the door, he quickly called out to stop him,

“A-are you leaving already…?” Atticus slightly pouted. It was always fun having his grandfather around since no one would dare mess with him if they sensed his presence.

“I’m sorry I have to cut this visit so short,” He shyly rubbed the back of his head, “I have quite a lot of errands to finish today, so I’m going to have to-"

The door quickly flung opened and hit Bate square in the face before he even had the chance to register what was happening. The crowd of travelers huddling around the Leo paid no attention to the roses now scattered all over the floor, or the fact that Bate was clutching his face in pain.

“M-momma!!!” Atticus cried out when he was feeling extremely uncomfortable from the sudden attention.

“H-hey!!!” Petta shouted, but slightly inched back when she saw Bate looming over the crowd. It didn’t take long to them to notice him as the crackling sound of electricity was heard, and the lights of the store were starting to flicker. Bate’s bright orange eyes now matched the electricity he was wielding, and with a low, agitated voice spoke to the crowd,

Though it was only two words, that alone was enough to cause the group to dart out of the shop in hysterics. The electricity soon dispersed once the shop was empty, and Bate proceeded to lift up his mask and rub the area where he was hit; which, unbeknownst  to him, caused blood to smear all over his face.

“Momma!” Atticus, who was nuzzling his mother for comfort, proceeded to cry and pointed straight at Bate. “T-they hurt Oujiiii!!!”

Once Petta saw, she set Atticus down and walked towards the warrior, “Oh dear, you have a bloody nose- are you going to be alright?"

“A-ah- y-yeah,” Bate said, now realizing it after looking at his glove, “I’ll be fine, don’t worry about me.”

He heard Atticus cry even more in the background from not only being scared from the crowd, but now because it caused his grandfather to be hurt in the end.

“I have to go back home and clean all this blood off….” He gave a rather annoyed huff and apologized to Petta for having to leave. Bate used his wings to open the door and rushed out before it got even worse, “I’ll come back later to pick up my order. T-tell Atticus not to worry. R-really, it’s nothing major.”

Once Bate left, Petta turned around and saw Atticus already picking up the damaged roses on the floor. Still sniffling, he tried his best to wrap them up for his grandfather once he returns…or if he even decides to return after being hit in the face, Atticus thought to himself. 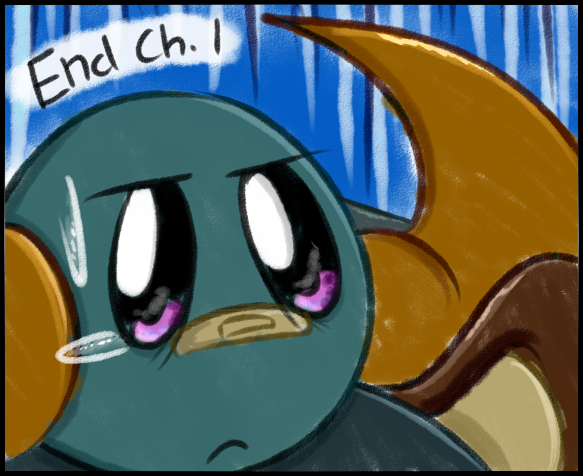