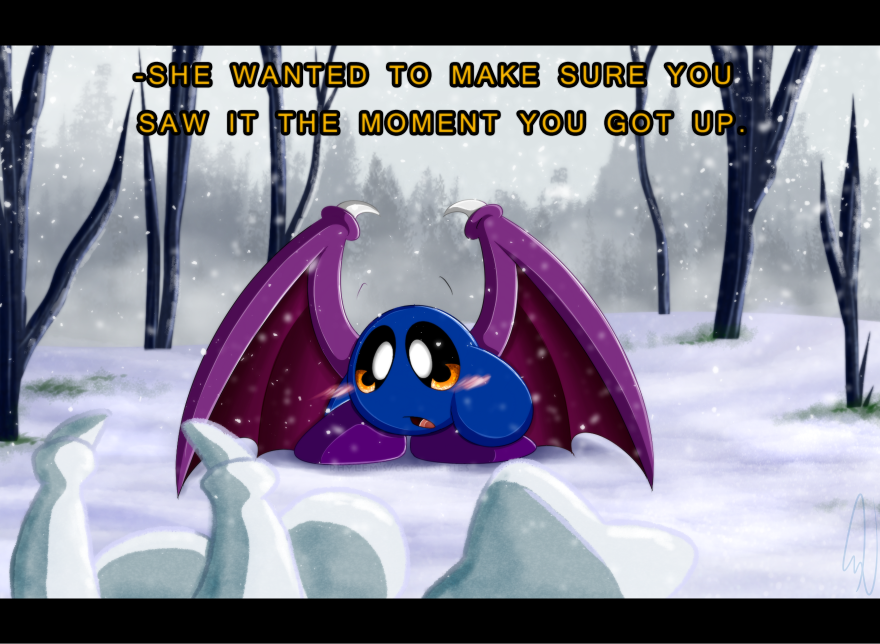 The Outside Town of Kalmari

Slowly pushing herself up from her bed, the Leo looked up and saw Meta frantically pointing out the door, fear stricken.

"Hnnng, M-meta? What's wrong?" She asked, trying not to nuzzle back into her soft pillow.

"M-my dad?" She asked, fully awake once he said that. Toddling over to the window, she let out a mortified gasp when she saw the whole area engulfed in ice. A harsh blizzard roared across the desolate landscape, and shook the windows to the point where it almost seemed like it was going to crack.

"Our Teachers left to find him, but they never returned and it's been an hour already." He nervously spoke, worried if they might be in trouble.

"O-oh, no...." She pushed herself away from the window and headed to her bed to gather all her things. Maybe her dad thought they kidnapped her and captured him as a result! If that's the case, they could be in danger! Packing her last stuffed animal, Kes made her way to the door.Clutching on to the handle, she faced him and softly sighed.

"Hey, Meta? I'm...sorry for all the trouble I've caused. Your home is destroyed because of me and...I hope I'll be able to make things right afterwards. Maybe your teacher was right, maybe running away wasn't the greatest idea...."

She should've known her village would come after her. It didn't even take long to track where she was staying at, and now his town is a giant icicle. Although she couldn't understand why they avoid others, for the sake of protecting what's dear to her friend, she knew she had to go. Twisting the handle, she smiled at her one true friend from the outside.

"Thank you, Meta. Thanks for inviting me to your town to get a glimpse of your world. We'll meet again one day, I promise. But for now, I have to go."

"A...and us, too?" An voice called out. Heading towards the pair, Nonsurat gave a small wave goodbye while Arthur quietly stood behind.

"I guess you can't say bye to everyone else, but we'll say it for you...." Nonsurat spoke. "I'm sure they'll miss you as well."

Kes didn't speak but gave the teal warrior a content smile from his kind words. She slightly looked at Arthur, and the warrior crossed his arms and gave a shrug.

"I've had enough snow for the year, so if your family returns Kalmari back to the way it was...feel free to come back any time." He mumbled the last part.

"Thank you, Arthur."  She giggled, taking that as a compliment. Looking at Meta, she released her hand from the door to grab his. With a cheerful yet melancholy tone laced in her voice, she spoke.

"I know I'll never forget all the fun times we had, so....until next time."

With her final goodbye, she stepped outside into the frigid blizzard. The three warriors braced themselves when the cold air hit them. None could see as she made her way out, and Arthur shut the door a few moments later. Giving a sigh of relief that the warmth of the house was replacing the bitter cold, he headed back to the living room where the fireplace was still burning strong. Nonsurat joined soon after, and Arthur turned to see where Meta was at. To his surprise, he was still at the door.

"Hey, Meta, c'mon! Before you freeze over there!" He teased.

"Ummm, yeah...okay." With his wings lowered, Meta turned around and quietly made his way back to the pillow fort they made together. Snuggling back in his pillow, he wiped his tears and turned away from the pair. Arthur gently nudged Nonsurat, and the two Puffs jumped off the couch to join him. Although it was a tight fit, they managed to fit in his little hut.

"It'll...ah, be okay." Arthur awkwardly spoke, not really sure how to comfort him.

"Yeah, it'll be fine, Meta!" Nonsurat chimed in soon after, knowing it must be hard to lose a friend. "She'll visit again one day, just you wait. I don't think she'd want you to be so mopey, you wouldn't want her to be sad about leaving, right?"

"I...I guess not." He mumbled in his pillow. He'd feel bad if she was just as trouble by it like him. He remembered her smiling before stepping out....could he really do the same? They made a promise. A promise to one day see each other again. Maybe...just for a little while, he could do the same. Pushing himself up, he wiped his tears and gave a small smile. "Thanks, you guys."

With the storm still brewing, the three decided to leave everything up to their Teachers and Kes. There's not much else they could do being stuck in their home, so with blankets thrown and pillows fluffed, the warriors snuggled into the comfort of the fort and fell asleep.


The sound of a whistling kettle caused all three warriors to stir. Meta was the first to wake. Looking around, he suddenly perked up when he heard several voices in the kitchen. Pushing himself from the others, he called out the name of the voice he was so eager to hear again.

"Teacher!!! You're okay!!" He saw the old warrior raising his tea cup towards Gordon. Once he heard his name being called, Bate gently set it down and faced the toddler.

"We are." He smiled, picking up the child once he ran to him. "When we came home, you three were fast asleep. We thought it would be best to let you rest."

"Yes." He nodded, motioning him to look out the window. The blizzard has long passed, and although the sky was still grey and specks of snow drizzled from the sky , most of the ice from their attack has melted.

"So...she's really gone, isn't she?" He continued to stare out the window.

"I'm afraid so, she and her family are traveling back to South Nova." He placed a hand over his head. "But.....she did leave a little gift behind for you before leaving."

"A...gift??" He tilted his head which caused a chuckle out of the old warrior. Standing up, he headed out the door to show him.

"She made something for you. She wanted to make sure you saw it the moment you got up." He said, walking a bit further. Once he reached the area, Bate set the warrior down. He watched
Meta walk towards a large snow sculpture of him with his Warp Star.

"I didn't know she had a knack for building snow Puffs. It was quite fascinating how fast she made it." He mused, keeling down to get a better look of it. "She said she hopes you like it."

With a small shiver after reaching out to touch it, Meta looked up at his mentor, hopeful.

"If...she ever visits again, do you think you could help me make one of all of us, together?"

"I don't see why not." He smiled. Sensing his student was going to be okay, he picked him up and started to make his way back home.

Meta got one more glimpse of the sculptor before resting his tired head on Bate's shoulders after a long morning. Wishing the words of his mentor will become true one day, he could imagine what it'll be like.

"It'll be the greatest thing ever, right, Teacher?"

Friends part way for now. u u