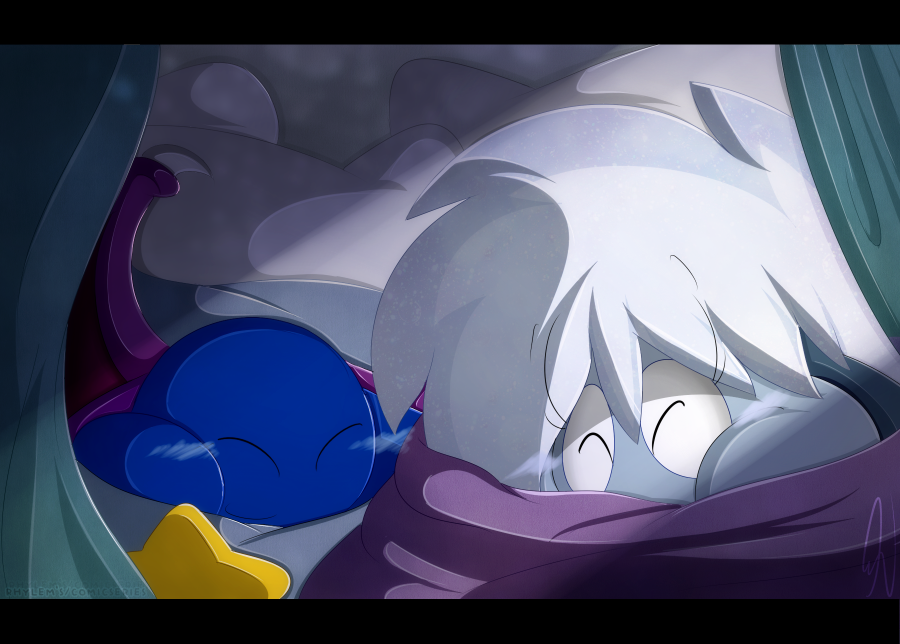 The Outside Town of Kalmari

"Yay! Another bowl, please!!!" Kes cheered and held it up towards Ramset.

"I like your style, kid." He spoke, pouring her another helping of the sweet treat. "Have as much as you want!"

"You gotta try the Nova Crunch bars Teacher Ramset has if you like the cereal so much!" Falspar ran to the kitchen to find a box for her.

"I'd hate for a friend of my student to leave empty handed. I'll be sure you go home with loads of Nova Crunch, don't you worry." Ramset reassured.

"Thank you, Mr. Ramset!!! Oh, I can't wait to share them with all my friends in South Nova!!!" She beamed, not realizing what she said before it was too late.

"South....Nova?" He repeated. "Wait, you're from South Nova? I thought you were from the outskirts."

Kes and Meta nervously lowered their bowl before inching away from the Sasuke. As Meta was about to speak, a frantic knock on the door caused the pair to jolt.

"Ramset!" Bate spoke from the other side. "Ramset, I need to talk to you, is Meta in there?"

"Oh no, it's Teacher." He whispered to Kesuk. While Ramset's back was turned, the pair ran to the other room to hide.

The little Puff looked around, and eventually pointed to a window on the other side. "C'mon, follow me!!" He took her hand and escaped before Bate or Ramset had a chance to notice.

"Bate, what's this all about?" Ramset asked after discovering the open window in the other room, and figured they ran out. "Meta said she's from the outskirts but she said she's from South Nova, am I missing something here?"

"It's...complicated" He quietly mumbled, still in disbelief Meta was running away from him.

"It sure looks like it. I don't think I've ever seen Meta go out of his way to avoid you. I'm sure he just wants to spend more time with her friend. If she's really from South Nova, they probably won't be able to see one another for a long time."

"Be that as it may, she was told by her father she wasn't allowed to visit Kalmari. Their town is very strict in allowing their kind to venture off, and I need to know if she ran away or if anyone knows about her leaving. I don't want them to think we ran off and kidnapped her. Sweet Nova, the last thing we need is a full on attack from her village. I'll try to catch up to them. If they come back to your place, please take them back to my house."

"You got it Bate." He gave the warrior a thumbs up and helped the warrior out of his rather small tree house.

"Meta, I don't think I can run any further...." Kes panted as her pace started to slow down greatly. "I'm too tired, can't we rest?"

"If we rest now, Teacher's gonna catch up to us!!" He cried, trying to pull her through the slippery slosh of melting snow. "C'mon, just a bit further and-"

"And do what, exactly?" Bate quickly used his talons to clamp on to Meta before he had the chance to run off. Kes wanted to run, but was too winded to do so and fell back on the small pile of snow below.

"T-Teacher, let go!!" Meta struggled against his grip. "I....I just wanted to show her around. It's not fair!"

"Meta, do you even realize how much trouble the two of you are in right now? Showing her around should be that last thing on your mind, why didn't you tell me she was here?"

Bate gently set him down next to the Leo, and with sad eyes, he looked up.

"Because I knew if I told you, you'd want to send her back!" Tears now streaming down his face, he turned away. "It's....it's not fair. She's my friend. I don't want to say goodbye forever. No one wants us to be friends, and I don't want that to happen."

"Gumball...." The warrior hesitated. He looked at the two toddlers sniffling and quivering before him, and the elder couldn't help but give a troubled sigh. Taking a seat across from them, Bate did his best to lighten the tone of his voice.

"Of course I want you to be friends with her, but not like this. She ran away from home, Gumball. Her father must be worried sick over her."

Then with one hand extended to the pair, Bate opened his palm to reveal a small, purple Warp Star. He held it up and noticed Meta inching away.

"I'm guessing this is how Kesuk found her way to Kalmari Town." He looked down at the little Puff. "Meta, our Warp Star is not a toy. You should know better than to give it to someone."

"S...sorry Teacher...." His voice lowered from the scolding.

Bate then turned to Kesuk. She embraced her self for the worst, but instead found herself in the midst of a compliment.

"You are very lucky you were able to summon his Warp Star. And while I'm impressed you were able to get here all on your own from its guidance....you do understand you'll eventually have to head back to South Nova."

"It's getting late." He looked towards the setting sun. "You may stay with us for tonight but come tomorrow, you will have to come with me so I can return you back home."

Although saddened by being torn apart once more, Meta gave the Leo a small smile to cheer her up. "We can both sleep in the living room and build a fort out of pillows! C'mon, it'll be so much fun!"

She slightly cracked him a small smile. "O-okay."

Both walked by the elder's side as they made their way back home.

Summoning one of his hands, Gordon lightly shook her hand. "My name is Gordon, it's a pleasure to meet you."

From his side, Nonsurat shyly greeted their new house guest. "We met earlier today, but I'm Nonsurat in case you forgot. I...hope we can be friends too."

Arms still crossed, Arthur looked at the pair and gave a small shrug. Kes could only giggle.

"Well, since you'll be staying with us, how about you tell us a little bit about what your diet consists of. Gordon's finishing up dinner, so is there anything in particular you're interested in?"

Kes peeked over at the Gordo preparing several dishes for their group. She never ate dinner from an outside town before, and her curiosity was getting quite the best of her.  "Oooh! I'll eat anything! I wanna try a typical outsider supper!!"

"Anything?" He repeated. "Are you sure? You're not allergic to anything are you? Are you okay with hot meals? Would you prefer something cold instead?" Bate wasn't quite sure what Frozen Leo's ate, hopefully anything they severed didn't upset her stomach in any way.

Kes shook her head and ran to the dinner table where Arthur and Nonsurat were sitting. She couldn't help but gasp in awe when all the dished Gordon made was set on the table. Meta took a seat next to her and pointed to the plate where several large meat sewers were at. Leaning forward, Meta grabbed one for her so she could try it. He watched as she slowly took a nibble, and then a large bite soon after.

"It....tastes....soooooo good!" She beamed, taking another bite. "Meat is sometimes really hard to find when we go hunting. During this time, we'd have to live off of lots of the wild fish that live below us." She said, taking another stick and chomped away.

From across the table, Bate blinked in surprise from her outrageous appetite. Not even five minutes in and she ate what he considered to be portions suited for he and Gordon. Gordon saw as well and headed back to the kitchen to cook more. Arthur watched in disgust as she finished not one, not two, but five sticks already!

"You eat like a demon beast...." Arthur mumbled, taking a bite from his skewer.

"Arthur." Bate hushed from his rude comment, but the Leo didn't seem to mind.

"My village fights lots of Demon Beasts! They're the tenderest when we cook them!" She smiled, taking the last of the kabobs.

"Oh, look! Gordon made more." Bate cut in and passed the plate around.

"Yay!!!" The leo cheered in excitement as she grabbed more.

Once dinner ended, Meta helped his mentor set aside some of the furniture in the living room so they could could build the pillow fort he promised her. Wile Bate did most of the heavy lifting, Meta was hard at work as he went in every room in the house to gather as many pillows as possible. Bate usually never likes when he steals all the cushions, but since this was a very special occasion, he'll allow it just this once. He quietly watched from afar as the two toddlers started stacking and leaning several of the cushions to make a small fort. Once sturdy enough, Meta dragged a few blankets and stuffed animals into their makeshift hut. Bate continued to watch over them until their happy giggles and chatter became softer and softer as they drifted off to sleep. Getting off from his chair, he took a few quiet steps towards them and couldn't help but smile when he saw the two snuggled up against each other.

He knew how much Meta was going to miss her. While he didn't express it like Meta, it pained him to know that his student was likely never going to his her again. She traveled all this way to see him again, and just to be torn apart in less than a day....it breaks his heart. They were so determined to keep their friendship alive, and refused to listen to anyone. She was, in a way, just like Meta. Bate understood where he was coming from, but even so, not everyone on her side of the family agrees.

"Maybe...things will be different in the future..." Bate softly spoke, heading to his room. "For now, sleep dreams you two."