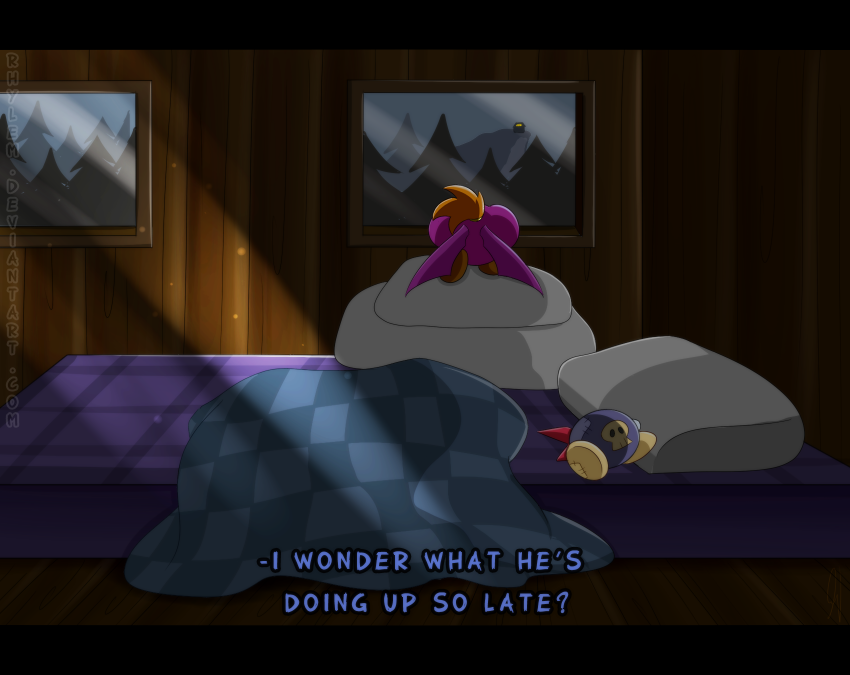 ​The House on Top

"Cite's been hurting for a long time, Dragato. It's a type of wound that won't go away so easily. If you really want to help, then be the friend he never had. I'm sure, after everything he's been through, that's all he really wants at this point."

The old flight instructor’s words echoed in Dragato's mind that night. What could he possibly do to help someone whose trust has been broken time after time? Just the thought of what he's been through made him completely restless. He tried going to sleep countless times, but simply couldn't and eventually gave up in the end. He let out a tired sigh and made his way to the tiny window next to his bed. A small smile formed on his face when he spotted Cite's home; a flicker of light illuminated through the window of the attic. Dragato looked at the clock- 2:45 A.M.

"I wonder what he's doing up so late?" He quietly said to himself.

"I could say the same thing about you, Dragato."  A voice said from behind.

Dragato jumped in surprise and quickly turned around. "T-teacher Ramset....W-what are you doing up?" He saw his mentor standing in the entrance of the doorway.

"Oh, you know...just doing some night time surveillance." The Sasuke walked in and sat on his bed. "I heard some movement, so I decided to check in to make sure you were okay."

He stared out the window and saw the house Dragato was previously looking at. "Is something bothering you?"

Ramset, being Dragato's mentor for quite some time, knew he was lying. He wrapped an arm around his small body and gave him a smile.

"Y'know...I talked to Bate earlier today. He told me you paid him a visit."

Dragato didn't say anything. Ramset figured he wasn't going to talk, so he continued.

"Cite, was it?" He said, "The one you recently befriended? Is that his house?" He pointed out the window.

The little Puff gave a silent nod. He slightly glanced back and noticed the light on top has now been shut off. He couldn't explain why, but he felt a wave of sadness knowing he was probably off asleep. He thought maybe it was because he didn’t want to be the only one of the two restless, or maybe because he wanted to talk and be by his side again. Or maybe....it something else.

Ramset noticed how distracted he got and decided to speak up.

​"I didn't know it was possible for someone like him to befriend someone like Bate." He let out a chuckle. "Bate told me he introduced you to him not too long ago."

"Yeah..." He smiled, thinking about their first run in with each other. "He's really shy, though. He, ah...stutters a lot 'n stuff, and prefers to stay inside most of the time because, ummm......"

"All of the things he's been through at his old home?" Ramset finished the sentence when he saw how hesitant his student became trying to say it.

Dragato gave a meager shrug. He assumed Bate told him about everything they talked about that evening. He looked at his teacher and noticed how serious his expression was. Though Ramset may act foolish most of the time, Dragato knew there was a serious, caring side of him. A side where he knew he could rely on when he needed someone to talk to. The little Puffball hugged his teacher; this was the time he needed that side of him.

"Teacher Ramset, I have no idea what to do." He confessed, "Teacher Bate told me to be the friend he's never had...but h-how? How can I help him? What if I mess up? What if I scare or hurt him when I didn't mean to?" He looked into his mentor’s eyes for guidance. "I never had anyone hurt me the same way they hurt him. How can I get him to trust me?"

Ramset leaned back and closed his eyes to think. It's true, Cite was a special case. Dragato's been living a happy, carefree life since he was born- not once worrying about the burdens of being bullied or harassed. Cite, on the other hand, wasn't dealt a good hand like Dragato and was picked and made fun of mercilessly his whole life. Two different worlds- polar opposites, wanted to intertwine with one another and share their world together. It wasn't going to be easy, but Ramset knew Dragato was up to the task if he really did care for Cite.

Ramset nodded. "Dragato, something like this can't change over night. If you want Cite to trust you, then you have to do it little by little. Y'know, step by step."

"But how?" He scratched his head, still not understanding. "I don't understand what you mean."

Ramset stood up and faced the little warrior. He cleared his throat and started lecturing.

"Put yourself in Cite's position for a change. He never once had a single friend up to this point. He doesn't know how it feels like to have one, and the ones he thought were his friend ended up hurting him in the end. Because of that, Cite put a wall up to protect himself from ever being hurt again. When you first questioned why he prefers to be alone, it's because he knows that no one would be able to hurt him. He would rather be by himself doing something he loves verses being around someone who'll make him question their every move and motive."

Ramset knelt down and placed an arm on his shoulder. Ramset, better than anyone, knows Dragato has a kind heart and would never do anything to hurt Cite. He trusts that he'll do everything he says to help break the wall Cite's built around him. He gave the Puffball a determined grin and told him exactly what to do.

"Dragato, it's going to take a long time for him to get over this, but if you truly care for Cite, then show him what it means to be a real friend. Be there when he's sad. Talk to him when he seems unsure of himself. Be the shoulder for him to cry on. Be the hand he could grab when he's falling. Then, only then will he see what it's like to have someone he can truly call 'friend.'

"B-but what if I mess up!" His voice, lacking all self-confidence. He didn't think something like this would be so difficult, would he really be able to help someone like him without failing in between?

Ramset held up a hand to hush him. “I know for a fact you won't fail," He went over and hugged him, "Because I believe in you."

“Believe in me?” He pushed him away, disappointed that’s all he had to say. “That’s it?”

Ramset got up and started to head out of the room, not feeling comfortable staying inside for this long. He stopped at the door slightly glanced back at his student.

“But y’know, Dragato…believing someone will only work if you believe in yourself. If not, then there’s really no point in trying to help Cite- for what’s the point in helping someone if you can’t even help yourself.”

Dragato watched as Ramset exited the room. Once the door clicked shut, he fell over and landed on his pillow with a thud. He didn’t expect his advice to be so…deep. It was a tad bit confusing for him since he likes things straightforward, and not in an angle.

​ "I think he’s been hanging around Teacher Bate too much.” He softly mumbled into his pillow before dozing off.

Now given the advice from his mentor, what's Dragato gonna do now? ​