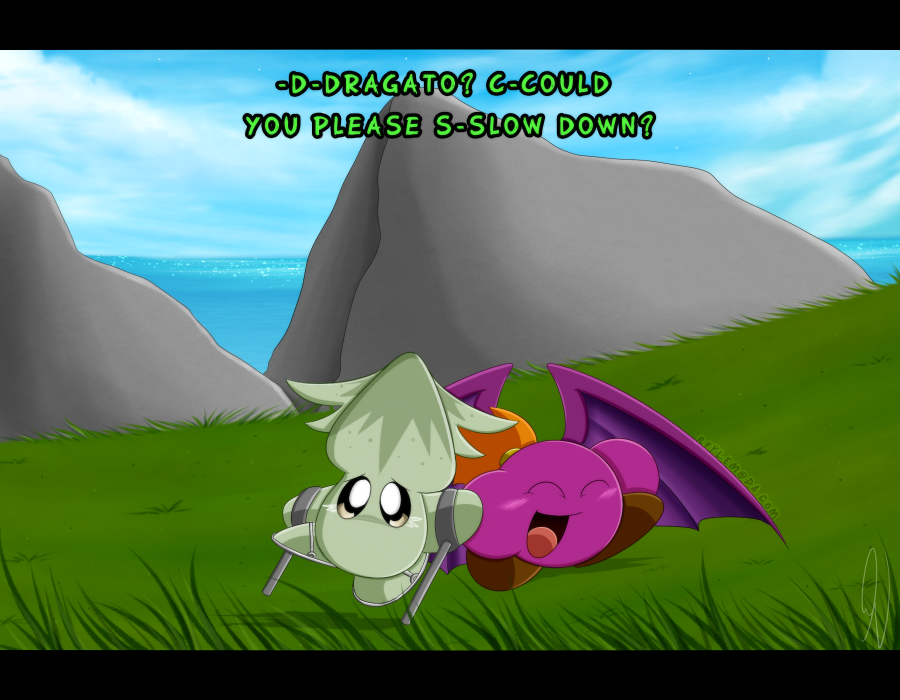 ​The House on Top

"What I mean is...." He stopped to think, trying to word his sentence correctly. "Well, we're friends, right?"

He saw Cite give him a nod. This made him smile a bit, so he continued.

"And friends hang out together, right?"

Again, the little Squishy gave him a nod. Now Dragato was excited as ever. He hoped what he'd say next would have the same answer. "Great!" He beamed, "So, I was wondering if I could go to your house, then!"

Unfortunately, Dragato didn't get the response he was looking for. He saw Cite embarrassingly look away and focus on the ground instead. He shook his head and started to softly speak.

Dragato noticed how severe his stuttering started to get. He knew from past experiences that he usually does that when he gets super nervous or scared. Dragato put a hand on his shoulder to calm him. Cite stopped talking and looked up.

​"Cite, I just want to visit so we can draw together," He smiled, "It's a bit difficult drawing on the dirt, and I'm sure it'll be so much easier on a smoother surface, don't you agree?"

Cite nervously fiddled with his hands, not knowing what to say. He didn't want to agree, but he also didn't want to get Dragato, his only friend, angry. He knew, at least from Bate, that Dragato would never hurt him; and Cite knew he could always trust Bate. Even if it's only been a week, he never met someone as nice and caring as Dragato. He let out a small sigh and tried to give him a smile.

He saw how happy Dragato got from his answer. Even though he was still nervous, Cite just kept repeating to himself that it was only going to be for a few hours. He begged to Nova that nothing would go wrong.

"Well, what are we waiting for? Let's go!!" Dragato got up and handed him his canes that were sitting besides him. Cite placed them back on his arms, and the pair made their way to his home.

Dragato was shocked to see his home perched on top of the steepest hill in Kalmari. It was a hill that, even for a Star Warrior in training, took a great amount of effort to climb. Dragato cautiously eyed Cite, not sure if he should ask how in the world was he able to scale it everyday because of his legs. Cite noticed and decided to answer it for him.

"Oh," Dragato noticed the distaste in his voice from the last sentence. He eyed the hill again and took a few steps forward. He looked at Cite and gave him a determined nod. "C'mon, we'll climb it together."

Before Cite could finish, Dragato grabbed his arm and practically dragged him up the hill in excitement. Cite, who was having trouble keeping up, cried out to get his attention.

“Huh?” Dragato looked back and quickly released his grip when he saw his friend on the ground. A good portion of his lower body was covered in dirt, and he had a few scrapes and cuts from being dragged.

“I-it’s okay.” He slowly stood up and wiped the debris of grass and dirt off of him. “J-just…could we w-walk the rest of the w-way, perhaps?”

“Y-yes! Of course!” Dragato fully obliged and started walking up the hill with Cite by his side.

It took the pair a good fifteen minutes to finally reach the top. Dragato couldn't believe how his friend could do it everyday; he made it seem so simple. Cite walked to the door and lightly turned the knob while Dragato curiously peeked over his shoulder to look inside. Cite noticed no one was home and opened it for his friend to enter. Dragato walked inside and took a look around. It was a pretty large home; much larger than his, anyways. The entrance lead to a massive living room connected to an equally large kitchen. There was an arrangement of different furniture throughout each room to match its specific design. Dragato looked back at Cite, astounded.

"Your house is huge! Do you have siblings or anything?" He asked, thinking that there had to be others since it was large enough to accommodate at least four or five.

Cite started walking to the stairs next to the living room and motioned Dragato to follow. He led the tiny Puff to his room, which was on the third floor- the attic. Once there, Cite opened the door and allowed his friend to enter. Dragato gasped in amazement when he saw all the various sketches and paintings throughout his room. He ran in and started to inspect all the pieces he made. Cite started getting embarrassed when Dragato looked through his work. He never liked anyone to see his drawings- it was a bit personal to him. He knew Dragato wouldn't laugh or make fun of him, though, so he sat down and waited for him to finish looking.

"Cite, why didn't you invite me sooner?" He said, still looking at his art. Cite just gave a small shrug.

"Big deal?" He pointed to one of his drawings. It was a large, realistic painting of the night sky; one of Dragato's favorite so far. "Your art is amazing! I didn't know you were this good."

The Squishy lightly blushed from his praise. He wasn't used to anyone complimenting his art before. A small smile formed on his face as he watched Dragato continue to look at his paintings. When he was finally finished, the little warrior joined the Cite on his bed.

"I wish I could draw as good as you," He finally said and let out a light laugh. "Why were you so scared to show me? I love it!"

Dragato had no idea how well Cite's artistic ability was. He was on a whole different level compared to him. This made the warrior wonder why he'd be so hesitant to show anyone; surly he didn't think his art was that bad. Cite just gave a frown and pointed to his closet across the room. Dragato could tell he was asking him to open it. The little warrior got up from his bed and slid the door. A small gasp escaped his mouth when he saw what was inside. A mixture of hurt and anger flooded the little Puff as he saw all the damaged canvases hidden in there. Dragato didn't need an explanation from him, because he already knew who was responsible for causing it.

"They did that to you, didn't they?" Dragato clenched his hands in anger.

Dragato carefully picked up one of the damaged paintings. A large hole, which seemed like someone kicked it, destroyed the painting of a rather detailed view of the mountaintops. He set it down and looked through the others. More anger consumed him as he saw various marks and graffiti scribbled on each painting. Now he understood why he was so scared to let others into his home. He wasn't embarrassed because of his art, he was terrified another incident like the one before was going to happen. He looked behind him and saw how hurt his friend was.

"C-cite..." He rushed over and gave his friend a comforting hug, tears now falling from his face as well. "I had no idea," He said. "I didn't know it was that bad."

Cite returned the hug, the memories of his past home coming back to haunt him. "T-that's why m-my mom decided t-to move. S-she knew it w-would b...b-be for the b-best."

Dragato pulled back and wiped the remaining tears from his face. He couldn't imagine why anyone would want to hurt someone as kind as Cite. What would they gain from destroying his paintings? All of this was so conflicting to the tiny warrior. Dragato was never bullied before, and after seeing what they've done to Cite, he hoped he never had to deal with something like that. Cite saw how sad Dragato became. He started to become nervous and tried to think of something to say.

Dragato embraced his friend once more when he heard how doubtful he sounded. "I won't ever do that to you, Cite." He whispered, "I promise."

"I see," Bate said, a hint of sadness in his voice when he heard what Dragato said. It was a few hours after Dragato went to Cite's home. Once he left, he decided to talk to his previous teacher about it, seeing as Bate was the only one who knew Cite as well as he did.

"I guess I could understand why he's so scared around others. I'd be too if someone did that to me." The little Puff said. "Just....I don't understand."

Anger filled the little Puff again. He stood up and threw his arms angrily in the air. "What could they possibly gain from doing that to him?!! He didn't do anything, and they still hurt him!" He shouted.

Bate placed a hand on the Puff's head to settle him down. "Easy, Dragato. I get what you're saying."

"Y-you do?" He kept his voice low this time. He sat back down and waited for the elder to respond.

"Of course I do." He said, focusing on the sky, "They gain the satisfaction of being able to make someone feel helpless. They knew Cite wasn't the type to fight back, so they used that as their advantage. It makes them feel superior, even if it was just for a split second. Cite's pain, his cries for help, is their enjoyment."

"T-teacher Bate?" Dragato glanced at the elder. He looked equally hurt trying to explain it to him, not to mention how sad he's become from it all. He wondered....

Before Dragato could ask, Bate stood up and started to head back home. He faced Dragato and gave him one last piece of advice.

"Cite's been hurting for a long time, Dragato. It's a type of wound that won't go away so easily. If you really want to help, then be the friend he never had. I'm sure, after everything he's been through, that's all he really wants at this point."
​
With that, Bate started to trek his way back home, leaving the little Puff with his thoughts.