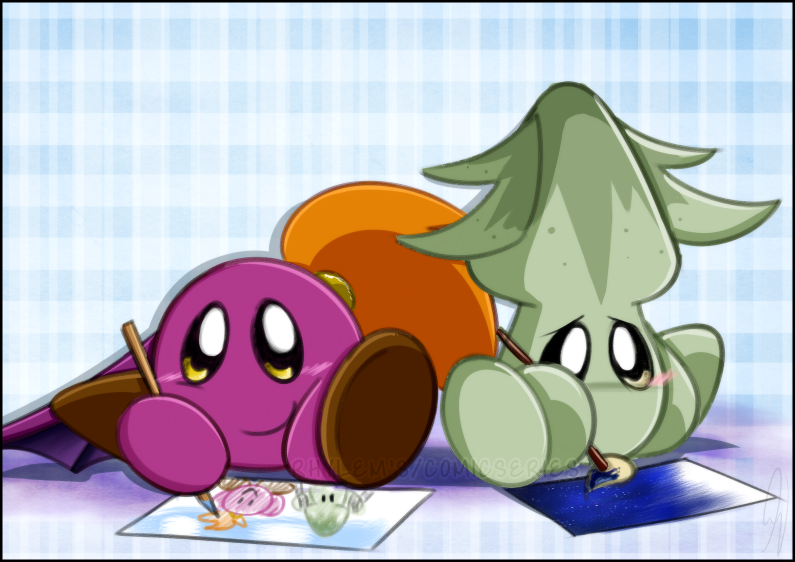 Dragato lightly knocked on the door of Cite's home the next day. After his chat with Ramset, he thought the best way to gain Cite’s trust was to just keep visiting him- that, and he really didn’t have any other ideas he could think of. A few minutes passed before the door opened to reveal another, much taller green colored Squishy. She looked at the little Puff and gave him a smile.


"You must be Dragato, I presume."

Dragato gave a timid nod. "Y-yes." He didn't expect his mother to be answering it, let alone her knowing his name.

"Come in, come in," She said quite cheerfully as she opened the door wider, "Cite's in his room, I'm sure he'll be glad you came to visit."

The little Puff walked in and followed her as she led him to the top floor.

"Cite talks an awful lot about you." She spoke while climbing the steps, "You know…he’s always been having the hardest time making friends his whole life."

"Y-yeah, he told me about that..." Dragato frowned, still saddened from yesterday. "I couldn't' imagine why, he's really nice."

"Oh, you don't have to pretend like you don't know, dear. I'm sure you already figured out why."

"He never told me directly, but…." He gave a small nod.

"It's nice you can see past that," She arrived at the door and opened it, "It's too bad not everyone thinks the same way as you."

She stepped inside and noticed the lights were still off. She flicked the switch and saw her son was still in bed, sleeping.

"Oh, Cite," She shook her head, and headed towards him- Dragato quickly following behind. Her mother nudged him a few times, hoping that'll wake him. "Cite, it's one in the afternoon, it's time to get up."

The little Squishy burrowed in his blanket more and softly mumbled, "Moooom, I w-was up all n…n-night finishing something. Too t-tired."

Dragato gave out a small laugh. This was the first time he ever heard Cite whine before.

"I know you're tired, but you have a visitor." She said, knowing that'll get him up. "He came all this way just to see you, and it'll be a shame to send him back."

Dragato saw the figure under the blanket flinch. He started laughing again and pulled it away from him, knowing Cite would be too embarrassed to uncover himself after hearing that. "Cite!!" He gave a cheerful grin, "C'mon, it's late. Get up already!"

"D-dragato?" He blushed in embarrassment when he saw his friend standing right in front of him, "W-why are you here? I...I thought y-you were t...t-training."

He shook his head. "He gave us the day off, so I decided to come here so we can play!!" He cheered and held out a small box containing his art supplies, "Look, look, look!!! I even brought all of my stuff so we can spend the day drawing together!!"

Cite's mother lightly laughed when she saw how flustered Cite got. She didn't think she'd ever see that day where someone would force her son to spend the whole day playing with them. Knowing he'd be in safe hands, she headed towards the door. "Well, I'll be downstairs if you need me." She gave a small wave and left the two kids to play.

"Y-you didn't have to visit." He nervously said once his mother shut the door, "I...I know y-you have other friends to hang out with. And I c…c-can’t do all the t-things they do…."

Dragato saw how sad Cite got when he said that. He knew the little Squishy hated being a burden to others, but the truth is, Dragato really enjoys hanging out with him.

"Cite, you don’t need to be like them for me to hang out with you. I really enjoy your company.” He sat next to him, "All of us have other friends we hang out with from time to time, and...well, maybe one day I can introduce you to them too."

Dragato started giggling. "Oh, they're not like that. My friends would love you!”

Hearing that made Cite crack a smile. It would be nice to have more friends like Dragato, he thought. Then again, the last thing he'd want is a repeat of his old town. He wasn't sure if he was ready to let others into his life just yet.

"Of course," Dragato sensed how guarded he was from the previous incident with his so-called "friends.”

The little Puff got up and sat in the center of the room. He opened his small pencil box and started taking out all of his supplies. He looked at Cite and motioned him to join. The little Squishy reached for his canes and slowly made his way out of bed. Too tired, and a bit lazy, he didn't bother with his leg braces and just wobbled over, trying not to fall. Finally reaching the center, he sat to the right of Dragato and took a look at all of the things he brought over.

"Here!" The little Puff handed him a blank piece of paper. Dragato placed one in front of him too and picked up one of his markers to start coloring. Cite timidly picked up a colored pencil and started to lightly sketch something before cautiously grabbing the small paint set next to him. Dragato peeked over a few minutes later and let out a small squeak when he saw what he was drawing.

“Wow, you drew that really fast!” He turned to face the drawing of the night sky, amazed how quick he drew it.

Cite quickly hid it with his arms. “Oh…t-thank you…b-but it’s n-not done y-yet…ummm…what are you d-drawing ” He decided to ask, hoping to shift the attention away from him.

“It’s not as good as yours, but…” He reached behind and showed the poorly drawn image of them playing together.

Cite picked it up, a small blush appearing on his cheeks when he saw what it was “Y-you drew…us?”

“Yup!” Dragato gave a nod. “Do you like it? I.....wanted to draw you something to help replace all of your drawings that were destroyed.”

Cite didn’t know what to say. Never has anyone in his entire life drew something for him before. Even though Dragato claims it wasn’t as good as his, he thought it was the greatest drawing in the whole room.
“It’s a-amazing, r...r-really. Thank you, D-dragato.”

Thrilled with what Dragato drew, Cite continued to finish his picture before handing it to the little Puff a few minuets later. The magenta warrior looked away from another drawing he was currently working on and gently took it from his hand.

“What, really?!” He beamed in excitement, “Oh, I can’t wait to show Teacher Ramset!”

“T-teacher Ramset?” He questioned when he heard that name. “T-that’s the one who t-trains you, r-right?”

“O-oh…” Curiosity lingering in his voice, “S-so, is it f-fun being t-taught under him?”

“Hmmmm, from time to time. He can be fun to hang out with, but when it’s time to train, he’s really strict and serious.” Dragato explained, He held up another drawing that showed Ramset and Falspar.

“That one’s Teacher Ramset,” He pointed to the purple like blob, “And the other one is Falspar.”

“The p-pink hairball?” Cite slightly giggled as he saw a small, green Puffball nearly being swallowed up by a glob of pink hair. Dragato mimicked his response and started laughing as well.

“That’s what he really looks like, honest!” He said in between his fit of giggles.

The pair ended up spending the whole afternoon drawing gifts for each other. Laughter filled the once quiet room as both colored the stack of blank pages Dragato brought for them.
After hours of drawing, taking breaks to eat and drawing some more, Dragato noticed the sun starting to set. He stood up and quickly starting packing his things. Dragato apologized and explained he never liked walking in Kalmari Forest at night, and he’d prefer to leave before the sun got too low.

“Umm…D-dragato?” Cite called out before he left.

“Yes?” Dragato turned around to face him.

“Do you promise to be awake when I get here?” He joked.

Cite gave a small giggle and nodded. “I pr-p….p-promise.”

“Then I’ll see you tomorrow,” He gave a wave and headed out his room.

Once the door clicked, Cite took the time to look at all the drawings Dragato drew for him. Many of them were pictures of them playing and exploring together- some were in Kalmari, while others were in completely different worlds. Dragato told him he hopes to travel and share an adventure with him one day when they’re older. A small chuckle escaped his mouth as he thought of the idea of doing such a thing.

“W-who knows….” He got up and placed their childhood dreams on his desk before heading off to bed. He turned off the lamp near his nightstand and slowly started to nod off- quite tired from playing all day.