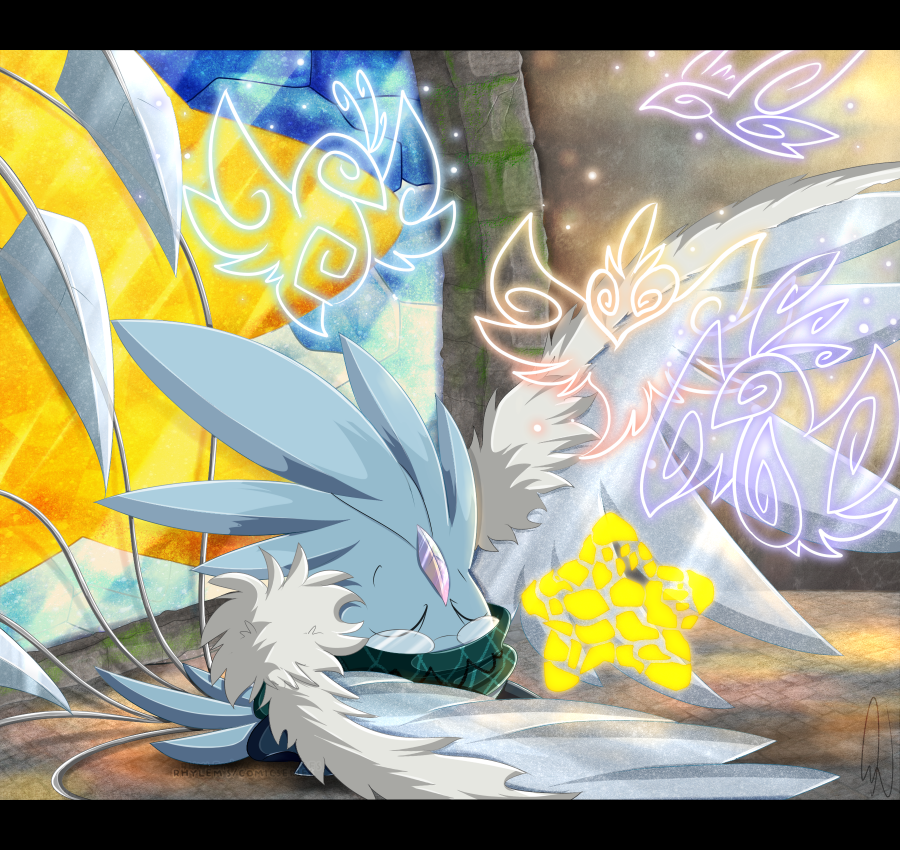 Another old sketch I felt like finishing. I think it turned out pretty nice! >v<

Not counting the Legendary Three, Atka is one of wisest and spiritual Guardians in my series. Although she's not able to see or speak to them, she can feel the presence of other Guardians who have long passed away. These particular Guardians are called "Wandering Spirits" They are still connected to the living world for reasons only the Guardian or Star Warrior know. Atka doesn't mind, she actually really enjoys the company of those who walked the world before her. These spirits are quite old as the language they speak is- "The Language of Ancestors"
I mentioned that the Star Warrior temple Atka visits has many Warp Stars littering the floor. Atka took it upon herself to find and match the pieces of each Star. Very rarely, a voice of a Spirit could be heard in one of them.

I would like to talk briefly on the type of Warp Stars in my series. I'll make a chart hopefully by the end of this month, but I'll provide a super quick description of several.

The Warp Star that Atka has in the illustration is a "Shattered Warp Star." Meaning, it has many fragments. It's usually caused when A Star Warrior or Guardian dies earlier than anticipated. In my series, it's called an "Indecisive Death." As stated above, VERY rarely  someone is still connected to said Star. Which results in a "Wandering Spirit."

There are two others Warp Stars I'd like to quickly touch on. One is the standard "Damaged / Cracked" Warp Star." You've probably seen it on Bate and Pyrell's Star. It's caused by trauma from the holder. These can be healed, though as seen with Bate's Warp Star when his altercation with Ellie was resolved.

The last one is the "Splintered Warp Star." Meaning it's Split in Half. This signifies that one of the two holders have passed away. For Example: Drani's death.  If you see in my time skip illustrations, Pyrell's Star is now split in half. Though it's kinda hard to see since I shade it a lot. XDDD A pretty good example that shows it is this illustration here.

If a Star Warrior and Guardian die without the criteria I mentioned above, the Star will simple fade in color. Slight scratches and cracks can still be shown. And of course, if much time has passed, it will eventually crack, shatter, and fade away like all things that are exposed to time. In fact, only small fragments of the first Star Warrior's Warp Star remain.
Species © Nintendo/ HAL Laboratory
Interpreted characters created from said species © Rhylem