"AAAAH, Kes, Kes, Kes, HELP!!! He's gonna kill me!!!" Pon's voice shook the Leo up and although Petta insisted her to calm down, she, like Pon, had an obligation to protect one another. She saw a lone, masked warrior with large purple wings glide through the air as he chased him. Although he was covering his face, Kes had a feeling she already knew who he was. She looked at Petta to confirm, and the Leo gave a nod.

"Yeah, that's Meta." Petta said, watching as the warrior pulled out his sword. "I suggest we hurry before he does a number on your friend. He's no stranger to fighting Demon Beasts, and he's quite a powerful when he needs to be."

"It sure seems like it." She pushed herself up and reached over to grab her lance. Using what strength she had left, she dashed towards the pair to stop him from attacking her comrade.

"Aaah, leave me alone!!!" Pon shouted as he dodged multiple slashes aimed for him. He threw several ice spears in his direction in hopes he'll back off. Unfortunately, it agitated him even more, and Meta sped up to the point where his sword was touching the tips of his hair. Meta raised his weapon to strike, but found himself being blocked by a rather large lance. He blinked in surprise and flew a few feet back to gain some distance between the him and the newcomer. Lowering himself to the ground, he tightly gripped his sword and pointed it to the Leo in front of him.

Kes didn't budge as she faced off with her old friend. Like the warrior, she gripped her lance and held it high to protect her and her comrade. Standing her ground, she waited for him to make the first move. Would he really attack, she anxiously thought. She wasn't up to par after traveling this far, so having a battle was something she really hoped she wouldn't have to do.

To her relief, she watched as he lowered his sword. The colors of his eyes shifted for a moment, and Kes couldn't help but think that maybe he felt the same.  She mimicked him, and gently set her weapon on the ground. She proceeded to kneel and lowered her head out of respect for being intruders.

"We're not here to cause any harm." She reached up to take off her mask for him.

Meta's wings perked in shock when he recognized the face behind it. He reached up to remove his as well, and Kes gave a breath of contentment when she saw the puff behind it.

Now knowing it was his old friend, Meta ran to the Leo and keeled down as well to get a better look at her. His concerned features couldn't help but cause her to smile.

"It's been a while, hasn't it?" She finally spoke, sitting down as she was quite exhausted. "It would've been quite awkward if I had to attack my first friend from the outside. It's nice to meet you again, Meta."

"Y-yeah, same here." He stumbled. He didn't expect to be reunited with an old friend after all this time. It was surreal, to say the least. Under normal circumstances he'd be thrilled, but after noticing how sickly she looked, he was more concerned, than excited.

"So that's why I found that other Leo snooping around Petta's belongings. Her shop being destroyed, her disappearing....and..." He noticed Petta and the Leo he was chasing earlier was standing across from them. "Petta!" He stood up to check on her. "Are you hurt, Arthur's been worried nonstop! You gotta come back to town, he's furious at the ones who took you."

"Meta, I'm fine." She waved off his concerns and focused on the Leo besides her. "As much as I'd like to come back, I need to help them first. They took me because they needed my assistance to make an antidote for them. Their village was attacked by a poisonous type of Demon Beast. They've traveled all this way to find a cure, and I'm sure I'll be able to create something to nullify the effects if I can get all the supplies necessary."

"Well, what are you missing? Is there anything I can get?" He motioned towards town. "Should I get the others to help?"

"To make a tonic this large, I'm going to need everyone to get me the plants I require. Head back and get me several pieces of paper and a pen. I'll write down everything I need for you guys. While you and the others gather them, the small amount I have right now should be enough to help Kes." She sat next to all her supplies Pon provided and began vigorously working to make the antidote before the venom does even more damage than it already has.

"Alright, I'll be back soon." He grabbed his sword and placed in on his back. Kes got a look at the charm dangling from it, and spoke before the warrior took off.

"So it's true, you still have the star I made." She warmly smiled at it.

Reaching back, Meta felt the small star from the hilt. "It's my good luck charm." He spoke, unclipping it and letting it rest on the palm of his hand. Old, chipped and quite warn from over the years, the warrior tightly gripped it before placing it in her hand. He stood back up and stretched his wings before starting to flap them. "Hold on to it until I return. Hopefully its luck hasn't run out."

Pon peered over and snatched the charm to inspect it. "You gave an outsider a gift? Kes, you know we're not allowed to do that!"

"These outsiders are the ones who'll be saving our village, Pon, bite your tongue." She snatched it back. Opening her palm, she mused at the old gift she gave him long ago. "We own them our lives for their selfless generosity. If wanderers came to our village to seek help, do you think we'd be as hospitable as they?"

"I......well...." Avoiding his gaze he replied with a small head shake. For as long as he remembered, he was told never to help or bring anyone into their village. If someone were to enter, attack their shop, and kidnap someone like he just did, he'd be ordered to kill the intruder on the spot. But in Kalmari....they showed mercy. They listened to them, and they forgave their actions and they were still willing to help. Were his beliefs really that tainted compared to the outsiders? Facing the burning Leo who kept quiet as she was making the antidote, he started to feel horrible for what he's done.

"Petta, was it?" He spoke, standing up to sit across from her. When she looked up, he started to stumble and fumble with his apology. It was rare when he apologized, and even rarer to say it to an outsider. But, he knew it had to be done for the sake of mending their terrible actions. "T-thank you for helping us. Not just for us, but f-for our family and friends too.  I...am so very sorry I destroyed your shop. Please, I will do anything to make it up to you.

"How about you help me with this antidote first?" She said, handing him one of the mortars with a several crushed leaves in them. "We can discuss damage control once we get Kes back on her feet."

Kes stared in disbelief when her friend humbled up to her. She never expected him to befriend an outsider, let alone the one he kidnapped. Smiling to herself, she watched as Petta instructed him how to prepare and ready all the ingredients for the tonic.

​The outside really was something else.

​The charm is a reference to this illustration here!

Illustration for the chapter can be found below! 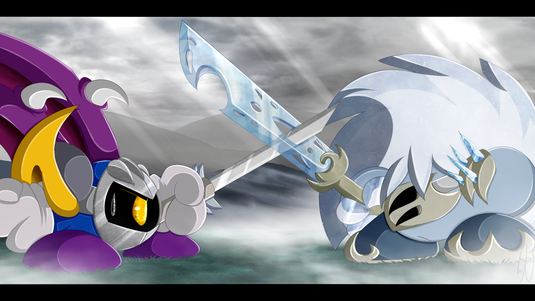