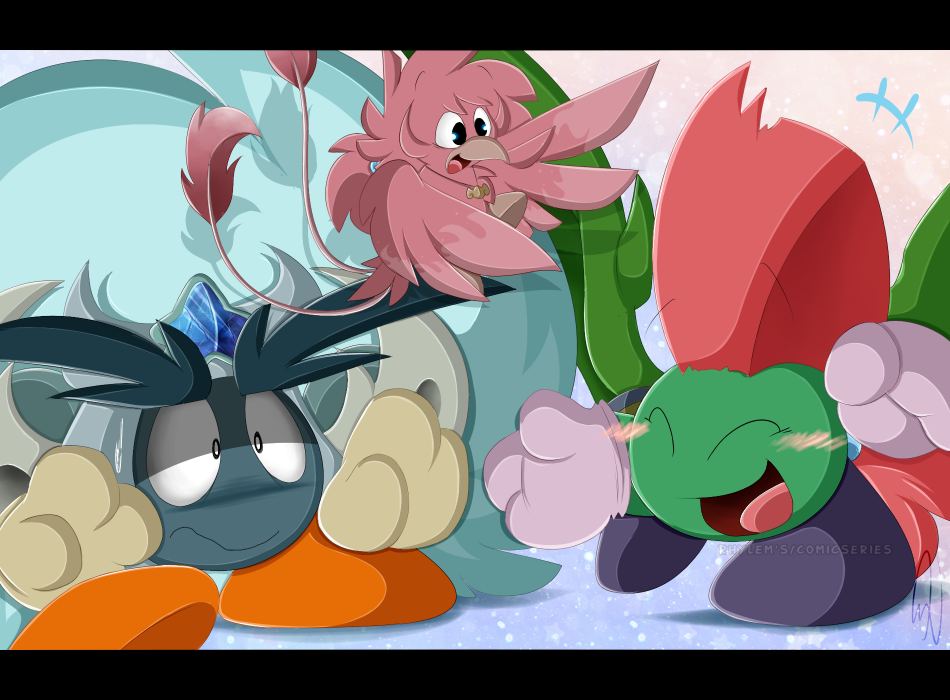 Being captain has its perks. For Pyrell, it’s his large living quarters. Soldiers have to share rooms with their comrades, but captains have the special benefit of having a room all to their own. Aside from his Guardian, Drani, Pyrell doesn’t like to mingle with anyone. He doesn’t like making friends, he doesn’t see anyone as his friends, and IF someone were stupid enough to keep badgering him, he’d have no problem setting them ablaze. Pyrell prefers it that way- he likes his privacy. He enjoys a quiet environment. It’s calming, reassuring and keeps him at ease. The last thing he needs is some needless racket causing a disturbance for he and Drani.

Once Falspar entered his life, that’s when everything changed. He lost his rank as captain because of him, he lost everything he worked for because of him. And to top it all off, he lost his comfortable living space because of him. He and Drani were mere soldiers now once Arthur took his place as captain. Pyrell was absolutely furious from it all. It took a LOT of self restraint not to destroy the Puff who ruined his whole life. Drani for the most part has to coax him every other minute to help his master relax. She could understand why he’s upset, but hopefully it’ll be a great opportunity to make friends with his new roommate!

When Pyrell and Drani realized it was Falspar who was their new roommate, Drani had to use all her strength to hold the Leo back. The living situation became VERY hostile for awhile. Pyrell did everything he could to avoid him, but Falspar made it almost impossible for that to happen. Drani noticed how happy and welcoming Falspar always is when Pyrell’s around. Always greeting her Master, always wanting to hang out or eat together. He showed no worries anytime Pyrell yells or threatens him to leave him alone. Something about him is strangely different. He’s stubborn, determined and very hardheaded to try to befriend her Master. Just seeing someone who isn’t willing to give up piques Drani’s interests. While Pyrell doesn’t prefer having anything to do with Falspar, the said can’t be said for her.

Eventually after months of living together, Pyrell finally started opening up. Of course, Pyrell will never openly admit it- he still has a stubborn air about it when Falspar talks to him. It only takes a few minutes, however, for Pyrell to finally budge and join Falspar on whatever outings he has planned for that day. Drani and Falspar’s Guardian, Alto, are occasionally left alone due to it. There was once a time where Pyrell NEVER left without Drani by his side, but things are finally changing.

While things have been changing for the better, Pyrell still likes to keep his life mostly private. He’s not an open book like Falspar who practically blurts everything to his comrades and mentor. Because of Falspar’s…willingness to tell everyone, it obviously didn’t take long for Falspar’s comrades to find out they were dating. Pyrell keeps a cool front about it, doesn’t try to get bothered when his comrades pry into it- especially that snarky runt, Meta. Of course, they didn’t need Falspar’s help to see it. During holiday and away from the battlefield, they all took notice how they acted when they were together. Falspar always clinging on to Pyrell’s arm and getting way too close for comfort for most people. The smiles, the nuzzles he gives the Leo. It wasn’t that hard to put two and two together.

Pyrell doesn't mind, and tends to accept it when Falspar openly shows his affection towards him. He’s a bit quieter and doesn’t express it like his other half, though. But don’t be fooled, Pyrell is VERY protective over him. Anyone who dares harm him will feel the full wrath of his power. Because of it, everyone knows never to cross Pyrell when it comes to their relationship.

Outside of their little circle, before they even became a couple- before they were really friends, Falspar would be ridiculed by the other recruits. Bullied, harmed and even beaten once they found out he had feelings for the former captain. Dragato left the GSA long ago as well as Nonsurat. Meta would occasionally help Falspar when he wasn’t busy, and Arthur didn’t seem to care at all as he was focusing on rising in ranks. Falspar truly felt alone during that time. He remembered one time where they dragged him into the showers and began beating the living life out of him. He remembers it all- the name calling, the slurs, the numbing pain from the endless punches and kicks. He cried, he begged and pleaded for them to stop.

His calls were answered in the form of Pyrell. His very present caused all the water from the showers to evaporate, and the ceiling lights to short-circuit. Seething with anger, and eyes full of rage, no one had time to act once he lunged towards the group. Falspar could only catch a glimpse of the fight as the lights in the room kept flickering. But what little he saw is something he’ll never forget. Taking on over a dozen soldiers with little to no effort. He’s never seen Pyrell display such raw strength and aggression before. One by one his fists flew, and each time a solider went flying across the room with a loud crack once they hit they tile wall.

And once he was done, and the floor soaked with blood of those who harmed him, he roared with such rage and fury that no one DARED move an inch until he left. He walked to Falspar, quietly picked him up and left the area. A very painful lesson was learned that day throughout the entire platoon. No one is to mess with Falspar.

After said incident, the pair never left the others side. Total opposites, always together. Drani can’t help but smile when she sees how flustered her master gets when Falspar urges him out of his comfort zone. It would be little things like eating candy, or playing in the snow- things Pyrell never does. Falspar truly has a way with the Leo. And because of it, there’s not anything Pyrell wouldn’t do for him in return.


“No, absolutely not.” Pyrell spoke, backing up and waving his arms to keep his distance away from the other. “I’ve done everything you requested during our vacation, and this is where I draw the line, Falspar. I don’t dance.”

“Have you ever tired it?” Falspar spoke with a grin as he began jamming out to the song on his portable radio Ramset gifted him. “C’mon, it’s fun!!”

“To you, maybe. But I’m not built for such a thing….” He spoke, inching back a bit more when Falspar held out his hand.

“Join us, my Master. It’s quite thrilling~!” Drani chirped with high spirits as she began joining Falspar once a new song started playing. She used one of her tails to wrap it around Pyrell’s arm to pull him toward Falspar.

“D-Drani! Let go of me!” Pyrell ordered as he was pulled closer and closer to the puff.

“Relax, Fireball. Here, lemme help.” Falspar faced him and gently took his hands in his. When the next song played, the pace of it was much slower than the previous one. Falspar’s movements wasn’t wild and upbeat like before, but instead calmer and slower.

“Falspar, I don’t know about this-“ He hesitated.

“Don’t worry, just follow my lead and you’ll be a natural in no time~!” He reassured.

Once they began, Drani perched herself on one of the tables across the room, and quietly watched as Falspar showed her master how to dance. One by one he helped Pyrell mimic his steps and movements. It didn’t take long for him to get used it, and only after several more songs, the pair were in sync with each other.

“I told you it wasn’t that hard~” He beamed. "Anyone can dance, even a big’ ol brute like you."

“It’s not hard when I have a partner who won’t leave me alone until I tried” He replied. “And don’t get used to it, this is only a one time thing. Now, how about changing the song to something more upbeat. I wanna dance with Drani next."

“Yup, sure thing, Pyrell!” He ran to the radio and tosses it to him so he and Drani can pick out a song. “I’ll join you later, I just gotta help Meta real quick. He’s been waiting in the kitchen for the past 15 minutes."

“Yeah, sure thing, I’ll be…..wait, what?” Pyrell looked up from the device and finally took notice of the masked warrior quietly sitting on one of the kitchen chairs. Their eyes locked, and Pyrell froze up in embarrassment. He was there the entire time?!!!! How?!! He didn’t hear him entering their place!

The Leo dropped the radio and ran with such speed where Falspar and Drani had no time to react when Pyrell pinned Meta to the wall. “What did you see?!!! You better not tell anyone about this!!!” He snarled in anger. Of course it had to be HIM who saw. Of all warriors, it had to be Meta Knight.

“I’m not going to tell anyone.” He calmly replied, not struggling nor fighting back against his grip. “Our mail got mixed up, I’m just here to return them.” He motioned Pyrell to look at the kitchen table where several letters from Ramset were neatly stacked in the center. “Now, could you please release me?”

Pyrell’s grip loosened from Meta’s calm behavior, and he eventually placed the warrior back on the floor.

“Thank you.” He spoke, passing the Leo without another word and heading to Falspar to hand him the letters.

“Hey, thanks Meta!!” Falspar smiled as he grabbed the letters. “I was wondering why I only received 10 letters this week, Teacher Ramset usually sends over 20!”

“Of course.” He said, making his way back to the door. “I’ll see you two later.” He gave a small wave.

Pyrell blinked in surprise how well Meta was taking everything . No snarky reply, no bickering between them. Could it be he judged the puff too harshly in the past?

“Ya don’t want to join us?” Falspar offered. “The more the merrier!”

From his side, Pyrell gave a small nod in agreement. Maybe things between he and Meta could start to mend.

“Thank you but I’ll pass….” Meta paused at the door with his hand firmly gripping the handle. “I already feel bad for ruining such special moment between my comrade and my future brother in-law. I’ll join next time…during the wedding.” He glanced back at the pair- specifically at Pyrell, with a smirk clearly hidden behind his mask.

“Good day, Falspar...and Fireball.” He snickered and closed the door before the Leo had time to act. From the sound of his angry shouts on the other side of the room, Meta couldn’t help but softly chuckle to himself. It always feels great making his superior falter.

Now that he’s in a relationship with Falspar, it’s almost too easy.
-The End-
​​​​​​Artist Comment:

Completed illustration from this post here, and little one-shot to add to the cuteness~!! ^o^ There's also additional information about their GSA days- how Falspar was treated by the other recruits AND how Pyrell reacted when they hurt him. NEVER mess with Fally when Pyrell is around. It'll be the last thing you'll ever do. >x<;;