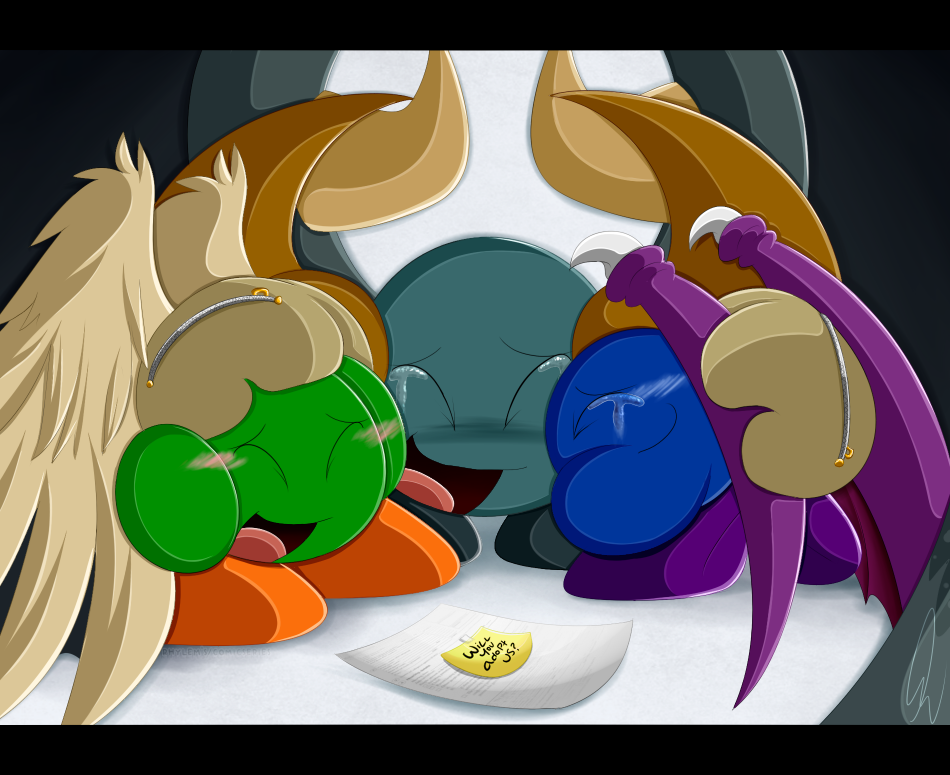 The Family of B. Bate
Bate / Meta / Arthur

​
Are you sure about this? Do you think Teacher Bate would be okay with it?

“If you want to back out, then you better tell me now.”

Under his mask, Meta Knight's bright orange eyes shifted towards the Green warrior next to him. His voice had no trace of amusement, or hesitation. It was one of the few times Meta wasn’t in the mood to play around. “I’ll cut your name if you don’t want to be part of it.“

“Of course I want to be part of it!” Arthur snapped, nudging the warrior to push him away as he took their gift and gently placed it in the box. “It’s the only gift I know he’ll love. I mean, it IS his 60th."

“Which is why we’ll present it to him during dinner. Everyone’s going to be there, so it’ll be perfect.” Meta said, picking up the small box and started heading to the door since the celebration begins in less than 15 minutes.

“Good idea.” Arthur agreed. “So everyone will know.”

“Hm?” Meta, turned around to face him and raised a brow at his statement. Thinking for a moment, he nodded slightly and continued to head out.  “Oh, yeah, and that too.”

“What do you mean by that?” Arthur mimicked the other as his brow raised in question as he followed him out the front door.

“I was thinking of something more important." His voice became rather smug.  "I know Teacher better than anyone, and I get the feeling something like this will be too much for him to handle. So if he ends up fainting from it, the restaurant is only 2 minutes away from the hospital. Since everyone is invited, it’ll be much easier to carry him there,  but sure— having everyone know about it is fine too.”

“You idiot.” Arthur stifled a chuckle and hit his head with the back of his wing. ”I thought you were being serious for once.”

His tone lightened up as he and Arthur joked the rest of the way to the restaurant.


“O-oh, a box of Nova Crunch…lovely. Thank you Ramset. I’ll…be sure to eat a bowl of it tomorrow morning.” The elder placed the item back in the bag and placed it with the other gifts.

“Hey, you didn’t even open the box! The gift is inside the Nova Crunch!” Ramset stood up from the table and demanded Bate to open it.

“I already know it’s cough syrup, so sit down and quit shouting before they kick us out like last year.” The elder huffed. “They already had to come by five times tonight, so quit pushing your luck.

“Fine, fine.” He sat down with enough force to shake the table their at. Mumbling under his breath, he angrily crossed his arms and blew several stands of hair away from his face while the others handed Bate their gifts.

One by one each student passed their gifts to the warrior- grateful appreciation followed soon after once he opened them. Each gift he received couldn’t help but cause Bate to smile as he placed them on the ever growing pile. Finally, once Bate placed Gordon’s gift to the side, Meta and Arthur passed their box to him.

And like before, Bate happily smiled and gently took the box from their hands. It was a rather small box; maybe around the size of a common manila envelope. It was white in color with a blue shimmering ribbon tied to it.  Not only that, but it was light weight- almost like there was nothing in it.

“You know I always will.” He spoke as he began untying the ribbon. Opening the top, Bate noticed a card neatly placed in the center while of several layers of tissue paper were under it. Reaching for the card in one hand, and his glasses with his other, the elder started to read it out loud.

“Really, you two?” Bate paused to glance at the two who encouraged him to keep reading.  “Okay, okay.” He gave a small cough to clear his throat and continued.

“After taking care of us for all these years, we’re glad to be part of your 60th birthday.

We know the two of us aren't the ideal pair to take care of. With our constant bickering and fights, nagging whines throughout the day, not to mention the endless nights where we’d get you up to comfort us from monsters under our bed; Nova knows how you managed to pull it off.

But even through all that, you were always there for us when we needed it- to comfort us, to make us laugh when we were sad. The countless trips to the candy store, the long nights spent star gazing, and of course- lots and lots of days playing and having fun.

All of the adventures we had, all of the memories we shared- Teacher, thank you for everything. You don’t know how much it means to us, so we hope our next gift shows it.”

Without skipping a beat, Meta and Arthur urged Bate to open their gift. Bate couldn’t help but give a small laugh in amusement from their behavior. They never acted this excited on his birthday, so he knew it must have been something VERY important.

“Meta, Arthur, I don’t know what you have planned, but whatever it is......I- ” Bate’s voice suddenly came to a halt when finally got to their gift. The table grew quiet, and everyone watched as Bate lifted the piece of paper with a bright yellow sticky note on it.

“W…will…..y....y....” Bate choked up as he tried to read it; his vision becoming blurry as several tears started to drip down his face. He removed his glasses and set the paper down for a moment so he can wipe his eyes.

“Wha-what’s going on? What did you give him?” Ramset perked up and tried to get a peek of the paper despite him being on the opposite side of the table. Falspar, who was much closer, peered over and caught a glimpse what it said since everyone aside from Bate and his students were in a state of confusion.
​
“H-hey, that’s not fair!!! Dragato and I were going to do that for Teacher Ramset’s Birthday!!!” The angrily pointed a finger straight at Meta, while Ramset gasped at the idea of receiving a lifetime supply of Nova Crunch from his students. Of course, that wasn't it.

Dragato let out a small chuckle once he heard Falspar say that and Cite, who was sitting next to him, nudged his friend to tell him since he was still lost.

Shyly rubbing the back of his head, a faint blush appeared in the warriors face as he leaned closer to Cite to whisper it.

“W..wait, really?” Cite started to smile from the response, and this got Nonsurat and everyone else asking. It didn’t take long for the word to quickly spread, and eventually everyone was happily congratulating the trio, but especially Bate.

“It’s been a long journey for you, Bate.” Gordon headed towards his friend and gave him a small pat on the back. “I couldn’t be happier for you and your sons.”

“Sons…” Bate’s voice was of a whisper. It felt so foreign to him. He raised them since they were toddlers, and although he’s always seen them as more than his students after he took them under his wing to raise train them, saying it out loud was something strange and new.
​
“The name ‘Teacher’ has a certain charm I don’t think could ever be replaced. If you don’t mind…” Meta spoke up.

“Not at all. After all these years hearing it, it would be strange being called anything other than that.” He smiled at the Puff before him. “Father, Teacher- they’re both the same in my eyes.”

“Okay, okay, enough with the waterworks and chatter!” Ramset scrambled upfront and held up a camera. Although he loves to tease Bate about this sort of thing, even he knows how important family is to him. “Let’s get a photo of your happy family.”

“Yea, c’mon Teacher!” Arthur went to one side of him, while Meta headed to the other. Both held up the papers and smiled, while Bate put an arm around each of them and tried not to cry while Ramset snapped the shot.

And just as quickly as he took it, a loud thud could be soon right after. Bate, who felt on top of the world from his wonderful gift, couldn’t handle all that’s happened and finally let the weight of his blissful moment come crashing down. The view of his world started to darken, but a smile never left his face. He softly laughed in the back of his mind, calling out to someone he lost long ago.

HAPPY BIRTHDAY my dear Bate!!!    Ramset still trying to sneak cough syrup in Bate's gift. It is their little birthday tradition after all.  XD

I wanted to do something really special this year, and I thought may it was finally time to make these three an official family. >v<

Meta and Arthur came up with the idea, since Bate's been basically raising them as his own for almost 10 years. Why not finally make them a family!

I mentioned before that Bate was given the opportunity to adopt Meta when he was a toddler, but due to him still recovering from his past, he couldn't go through with it. After many years of moving on and starting a new chapter in his life, Bate can proudly say yes.

He is the father of Meta and Arthur.
Species © Nintendo/ HAL Laboratory
Interpreted characters created from said species © Rhylem