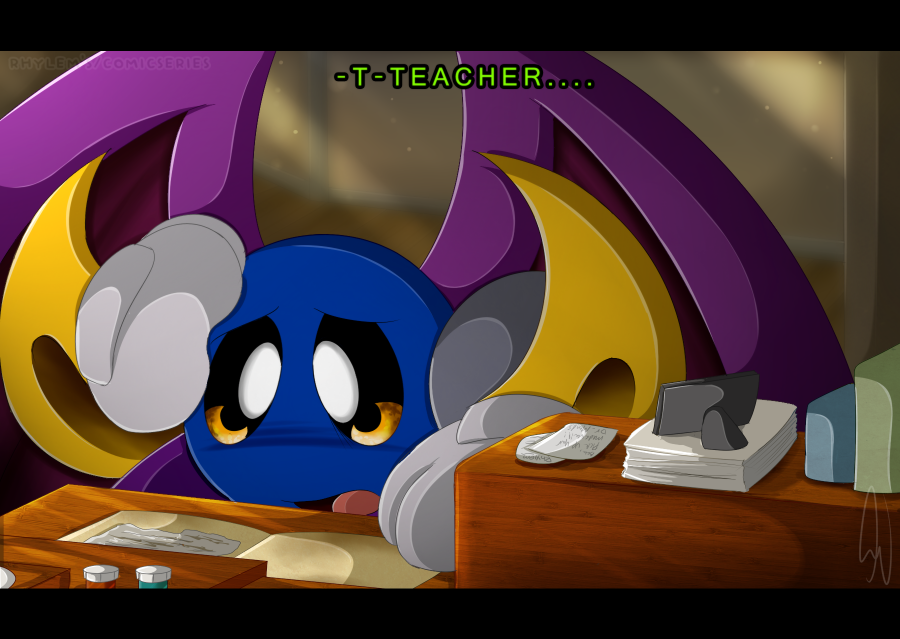 Bate gave the warrior a pat on the head, and smiled fondly at the boisterous warrior. “I thought you might enjoy several of the casinos there seeing as you’re finally of age. I already went ahead and booked our hotel and flight. We’re scheduled to leave in the next 3 days, so get packing, Gumball."

Meta’s wings fluttered with excitement when Bate handed them their plane tickets, and he dashed to the elder to hug him. “Thank you, Teacher!”

Bate returned the hug, and got up from his seat not a second later to head to the attic. “I’ll be in the attic to get our suitcases, so in the meantime could you run to the store and get film for the camera? Nova knows Gordon would want to see photos while we’re gone."

Once reaching the top of the stairs, Bate called out to the young warrior once more. “O-oh, Gumball, do you think you could go in my room and find our passports first? They should be on my desk somewhere in a manila envelope.”

“Hm?” Meta peeked in the hallway when his Teacher called, and headed to his room to get them.

“Let’s see….” Meta pushed around several loose papers on his desk. He moved them to the side to see if there were any envelopes underneath, but he couldn’t find any trace of it.

“Ah…he did say his top desk…right?” He mumbled and decided to open one of the drawers to his left. There were rows of folders neatly filed away, and Meta gave an unsure glance out the door since he didn’t know if he should go through them. The Puff decided to lightly skim a few papers, and came across an envelope Bate described all the way tucked in the back.

“Found it! Teacher must have forgot to take them out.” He beamed, and yanked it out of the drawer. The warrior gave a slight frown, however, when he noticed how old it was. Surly this wasn’t the one Bate was inquiring about, it looks like it hasn’t been touched in years. Before he had the chance to put it away, something written on the front caught his attention.

“That’s odd…..” The puff quietly spoke to himself when he saw that his name was on it. He didn’t remember ever getting a passport when he was younger, nor does he remember having his teacher taking home any important forms about him. Curiosity filled the young Puff, and he did a quick search of the elder’s room to make sure no one was there before carefully opening the envelope. He spotted several pieces of parchment, and dumped them out on his Teacher's desk to take a look.

“What is this…?” He grabbed the first paper. Like the envelope, it was extremely old, and looks like its been damaged due to the many crinkles and tears on it. It only took the warrior to read the large bold letters on the top before he quickly pushed himself away in shock.

With much hesitation, Meta made his way back to the desk and looked it over one final time before calling out to the old warrior. With confusion and shock, Meta grabbed the papers and stormed his way to the attic.

“T-Teacher!!” He shouted, and headed towards him when he spotted the elder near the suitcases he was looking for. Bate glanced at Meta, and gave him a small smile.

“I managed too find the suitcases, I- uh…..” Bate quickly stopped when he noticed his student crying. “Gumball, what’s wrong? Why in sweet Nova are you crying?”

Meta locked eyes with him, and held up the papers right in front of Bate before finally speaking.

Like Meta, Bate recognized the documents in his hands. His smile quickly disappeared as he spoke to his student. “W-where’d you find those papers?”

“It doesn’t matter where I found them, t-tell me what it is” He demanded.

“How come you never told me!” Meta cut him off, tears now falling. “Why am I just finding out about this right now?”

“How is it complicated?” He asked, throwing the old papers on the ground. “Are you telling me all this time…..a-all this time you……y-you….” He cut himself from finishing the rest and just looked at his teacher in distraught

Bate, now speechless, kneeled down and picked up what his student discarded. Sad eyes looked over the unfinished forms, and a lengthy  sigh escaped his mouth.

“It…was so very long ago, Meta. When you were just an infant.” Bate spoke as he recalled the memories. “I would visit you each day in the hospital. I…wanted to make sure you and the others were okay once you were brought in….”

Meta quietly listened as he teacher began telling him what happened that day.

“You were so much frailer than the rest. While the other four were able to leave, you had to stay for several more week. So I continued to stay to make sure your recovery was going well. Mends was the one who took notice of my concern and....that’s when he suggested the idea of having me adopt you.”

Bate focused his attention on the forms he was unable to complete. Only his name was filled out, and nothing more. “I had thought about it for a very long time but in the end, I just couldn’t do it.”

The elder could sense how hurt his student became once he heard that.

“I wasn’t in a good place, Meta.” Bate faced his student and placed a firm grip on his pauldrons. “You remember, don’t you? You were able to see my memories at one point…”

The navy puff focused on the floor and gave a small nod when Lady Atka showed him when he was much younger. "Y-yeah, I remember.”

“I was not suited to take care of you, Gumball. I was recovering and battling my own demons during that time, and it would’ve been incredibly selfish and irresponsible on my part if I went through with it….”

Bate released his grip, and took a few steps away from his student. “It’s….not like I forgot about them. It’s always been on my mind, even if those papers have been untouched for many years.”

Meta looked up in surprise when he said that. “Really?”

Bate heard the tone of his voice shift, and he glanced back at the small warrior. “If course it’s been, both you and Arthur are everything to me.”

The young Puff’s wings slightly perked when he said that as it was rare when Bate spoke to him in such a manner. He always knew his teacher cared, but him actually saying it?!!  Meta couldn't help but crack a smile. Bate was so preoccupied, he didn’t noticed how excited his student was becoming.

“I took you in when I felt like I was capable of doing so, and I know I never say or express it as often, but I hope you know how much I care for the two of you. "You’re….” He paused, and Meta, now standing on the tips of his toes, waited. Bate, still not paying attention, just gave a small shrug and shyly rubbed his head.

“Well, you’re my boys.” He finally said, and focused his gaze on the damaged papers. “I didn’t think having to sign papers really mattered after all these years of raising you, and-“

Bate suddenly paused when he glanced up at Meta, and noticed an unusually big smile plastered on his face. Bate took a step back and tried his best to regain his usual, strict self.

“Meta,” He said, his voice lacking what he had several seconds ago. “This isn’t news to the both of us, so settle down.“

“I know it’s not, but still…." Meta, still smiling like his toddler years. “It’s always nice hearing you say it."

"Really, now? Is that all it takes?" Bate said as the tone of his voice let up. His student really was something else, making his old teacher worked up like that. He didn't think a few simple words of recognition could get his student so happy. He shows his parental side plenty of times, but maybe voicing it once and awhile would help as well. He'll have to remember in the future. Meta, after all, is the clingiest of the group- even after all these years.

"Gumball, you truly are a delight at times." He spoke, giving him another small pat on the head.

"Enough of a delight to stop at the candy store to stock up on treats before our plane leaves?"

Bate could only give a huff of amusement.  Sweet Nova, that boy of his.
​​​​​​Artist Comment: