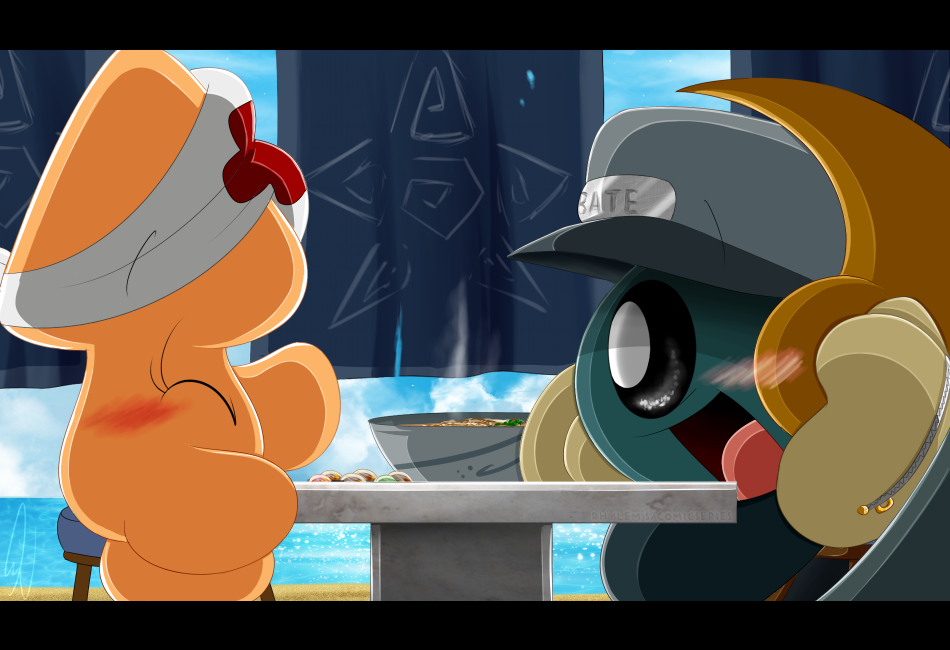 The Days of Contentment
Bate / Ellie
​
​"See you tomorrow!"

With a small wave to the group of Squids, Bate stretched his wings and took off  to his next destination. Since the homes in Kalmari Town weren't too far from each other, Bate landed only a few moments later. Because he utilizes his wings to get to each home, he finishes his shifts much earlier than the others. Sometimes he'd have an extra hour or two to himself, but as the months passed by,  and the residents felt more comfortable with him being their new mail carrier, Bate found himself constantly behind schedule. This house, like the others before, was no different. Taking a few steps to their mailbox, Bate rummaged through his bag to deliver the letters. Before he had the chance to take off, however, a voice called out to him.

"Oh, Bate! Good afternoon." A tan colored Squishy waved at his direction as she stood up from her garden to talk to him. Bate smiled to the other, greeting her like all the others.

"The spring season has been super generous to us in Kalmari Town. How about you, was your harvest just as plentiful?" She lifted her basket of freshly picked berries to show him.

"Yes, Ellie and I spent yesterday afternoon digging up all of the vegetables we planted. We're planning on making stew with them tonight." He then pointed to her basket. "And are you planning on making anything special with yours?"

"I'm hoping to make jam with this batch. I have an old recipe I would like to try, so when it's done, I'll be sure you give you a jar. I hope you and Ellie enjoy it once it's finished." She beamed, knowing how much gifts means to him.

Although she was uneasy about him being their new carrier, the past few months showed her that he was of no threat, and was actually very nice and welcoming. When she finally got the courage to talk to him, it was then how awful she felt for avoiding and ignoring him in the past. Many of the Squids in Kalmari felt the same, and began opening up to the warrior. She eventually made him several fruit tarts for him as a sign of friendship when he dropped off the mail one day. Even though that encounter was several months ago, she could still remember how grateful he was once reviving them. She does her best to give him little treats often when she's at home. It's always a joy seeing how happy he gets.

"O-oh, thank you." He shyly rubbed the back of his head since gifts always cause him to get flustered. I'll be sure to tell her when we meet up for lunch this afternoon."

"Well, you should hurry up, then." She giggled, looking down at her watch. "It's already five past twelve."

"Wait, it is?!!!" The warrior's voice started to rise in panic as he quickly started to flap his wings to make his way to meet her. "Have a good rest of the day, miss! See you tomorrow!" He yelled out before taking off to the small restaurant.

Ellie looked up from the menu when he heard the loud panting of Bate as he ran to the table once he spotted her. Winded and exhausted, the Squid quickly stood up and helped him take off his mailbag before leading him to the chair across from her to rest.

"Bate, I told you not to worry if you're running late." She slid her cup of water to him which he downed in a few seconds. "Look at you, you're completely fatigued.

His voice then lowered as he shyly locked eyes with her. “It’s one of my favorite things I look forward to every day.”

Upon hearing that, she couldn’t help but lighten the tone of her voice. Giving a warm smile to the other, she reached over and placed her hand over his. “Such a charmer, aren’t you? Alright, Mr. Mailman, you’re off the hook…this time."

He soon returned the smile, and focused on his menu Ellie slid towards him. Although the restaurant provided a selection of many different meals, he always went for the item Ellie bought when she first took him here.

“Pork ramen, extra noodles, please.” He spoke to the cook who gave small nod as he prepared his dish. Ellie already ordered beforehand, so once Bate placed his order, the chef gently set her meal on the table. Bate raised a brow, and couldn’t help but softly chuckle to himself.

“Dango? Don’t tell me you already finished your meal prior to my arrival.”

“Elliot brought over some leftover dumplings he and Alba made last night. I kept telling him I was going out, but he insisted.” She picked up a skewer and started to nibble on it. “But that’s okay. I’ll have more of an appetite tonight when we make our stew.”

She finished the first set, and held out another stick to Bate so he could take the first bite. The puff happily obliged, and beamed from the sweet taste. "Thank you, Ellie." He handed it back to her so she could finish the rest.

“Order up!” The chef called out, handing his bowl to the warrior. Bate could hardly wait to dig in as he worked up quite an appetite during his route. He quickly grabbed his chopsticks and eagerly scarfed down his meal.

Ellie watched in amusement as the warrior slurped down as much noodles his mouth could hold. She couldn't help but laugh when she saw his face dripping with broth. "The food isn't going anywhere, Bate. Take slower bites." She held out a napkin.

"I can't help it, it's one of my favorite dishes." He spoke in between bites.

"Tell me about your day, then." Ellie asked, knowing it'll get him to eat at a slower pace. "How was work?"

Setting his bowl down, Bate tried to speak although his mouth was full of noodles. "Lots of conversations."

"Is that so." She giggled, seeing how happy he was becoming. It was always nice to see the other Squids in her town warming up to him. She continued to quietly listen as Bate went on how everyone was eager to greet him. Hearing stories of some residents giving him small gifts, or some asking for his help like fetching a toy on the roof, made Ellie just as peachy and happy as the warrior. Once he was finished, he asked about her day. She, like Bate, kept him updated with visitors, foolish antics with Elliot and Alba, and anything else she could think of. Time simply didn't exist when they were together, so both were surprised it was already time to part ways. Bate seemed to be taking it much harder than Ellie.

"Bate, I'll see you in 3 hours." She tried to suppress her laughter at the sulking Puff. She leaned over and gave him a peck on the cheek, followed by a hug.

"I...I know. I just hate being apart from you." He hugged her back, giving a small kiss on her mantle. Leaving was always the hardest part for him, even though they live together, and practically stick to one another like glue off of work. Ellie, of course, noticed, and reached up to adjust his hat. Pushing it up a bit so she could properly see him, she spoke.

"Same time, same place tomorrow?" Her soft voice was able to ease the warrior. A sensitive soul he was, she always had a way to comfort and coax the Puff.

"Same time, same place." He repeated, smiled back as he slung his mailbag back on his shoulder. "Goodbye, Ellie. I'll meet you at home!"

Giving a wave, she tried not to feel just as emotional as Bate flew off. Like him, she never liked it when they parted. They truly were one in the same.

Inspired by Page 15 of "The Bird and The Squid"
​
This takes place before Bate and Ellie were married. Bate currently works as a mailman to help support himself and Ellie, while Ellie still works as a nurse. They would always meet up for lunch, which both greatly enjoy. <333 The always dislike parting ways once lunch ends. Those two are madly in love, and they hate to be apart for long. Precious lovebirds. x)
​
Other Bate / Ellie Art
​
Species © Nintendo/ HAL Laboratory
Interpreted characters created from said species © Rhylem