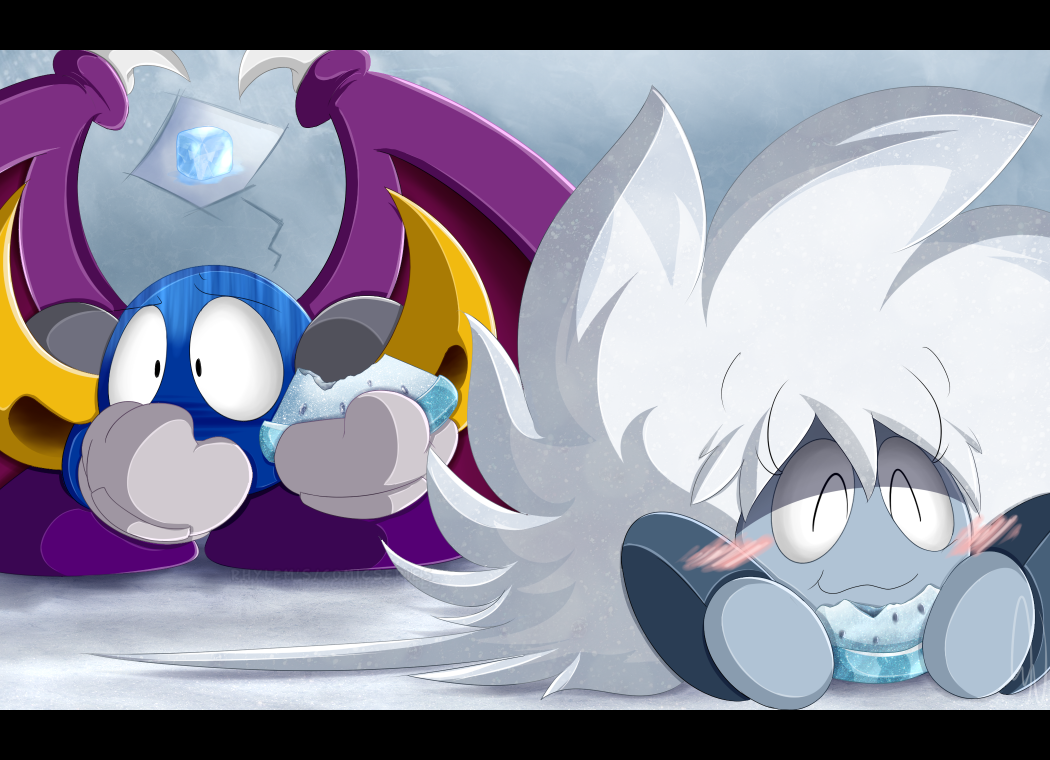 The Arctic Melon
Kes / Meta
​
The bitter cold and grey atmosphere from the recent snowfall barely had any effect on a young Star Warrior named Meta Knight. A smile on his face, the Puff happily made his way back to his home he, Arthur, and his mentor all shared. Stopping at the front of the door, he gave a rather hard knock since his hands were filled with bags from the market. It wasn't often he does the shopping, but since someone very special to him was coming to visit later this afternoon, he figured it would be nice to make her a "Welcome back to Kalmari" feast.

As he waited for the door, he thought back to the previous year when he last saw her. Kes, a Frozen Leo who visits only a few days out of the year, couldn't help but cause him to smile once more. Having her around always made the winter bearable. Summer was Meta's favorite season, but he slowly found himself leaning towards the cold season if it meant he got to see his friend again. He wondered if she was close by.

When the handle of the door started to move, Meta's eyes snapped forward, and greeted the other once it started to open.

"Thanks, Teacher, I-" He suddenly stopped mid sentence and realized it wasn't his teacher, but another.

Standing at the doorway with a bright smile on her face was Kes. The Leo he was thinking about not even a second ago. His mouth hung open as he was still in shock that she was actually here. How long had she been waiting? Sweet Nova, if he knew she'd be arriving around this time, he wouldn't have taken the extra several hours helping Petta repot her plants.

"Heya, Meta. You gonna come in?" Kes' voice caught his attention, and he nodded without a word as he shuffled in the house. Inside, Bate was in the kitchen looking over several large items he assumed Kes brought over as gifts. The old warrior looked up to acknowledge his arrival, but still stayed in the same spot to tend to a round,  blue looking object on the counter.

"Kes brought over quite a lot of gifts for us, Gumball." He smiled, pulling out a large knife to cut a slice from what appeared to be a blue watermelon. "I remember eating one of these several years back when I was visiting Atka. My Guardian claims it's one of the best tasting fruit out of the four Novas. Rare to grow, rare to get, and even rarer that one's in Kalmari Town. " Bate spoke as he picked up a slice and eagerly took a bite.

Meta clearly saw a small blush on his mentor's face appear along with a smile he rarely showed. He hummed in delight and thanked Kes once more.

"It looks like a regular old Melon to me." Meta spoke.

"Don't be fooled, Arctic Melon is a treat alright." She said. "Just like your mentor said, it's likely the best thing you'll ever eat." She took the knife to cut him and herself a slice. "They're the rarest of the little produce we grow in our village. Takes several months mature, and it's only good for around a week or so. I wanted to show it to you during your Squidmas Celebration, but by that time it would've rot. So lets dig in!"

Meta followed Kes outside where it was much colder compared to the warm atmosphere inside. She took a seat on the untouched blanket of snow besides him and took a bite. Meta still stood and eyed the rich blue slice of melon in his grasp. He was always used to eating the deep red colored watermelon Kalmari has, seeing something so different put him on edge. He tore his gaze away and looked at Kes clearly enjoying it. She gave a small squeak of approval as she took another bite.

"Hmmm..." Meta hummed. Well, if she liked it, and his mentor did as well, maybe it really was delicious. He held the slice close to his face and took a rather big bite.

Meta quickly put his other hand over his mouth as he tried not to spit it out. It felt like he just ate a block of ice. It was cold, it was tasteless; as if he took a hand full of snow and shoved it down his throat. Kes seemed to be distracted by her own slice, so he did he best to chew the frozen treat before letting out a small, relived cough.

"Well of course it is, silly." She giggled, looking up at him. "One of the coldest fruit there is." She then paused, looking down at his unfinished slice.

"O-oh, I see." She realized what he meant. "I forgot your mentor was from South Nova. I suppose he's able to eat it without issue. But you...."

"S-sorry, Kes." He gave a small frown. "I know how hard it was to bring one here, but I think maybe Teacher can have my portion. It just sorta tastes like water to me..."

"Does it now?" She tilted her head, reaching over to take a bite of his slice. "That's odd, it tastes super sweet to me. I guess outsiders haven't evolved an acquired taste to South Nova delicacies."

"Haven't evolved you say?" Raising a brow, playfully smirking at the Leo. "Says the one who eats the carcasses of Demon Beasts."

"They're good if you give it a chance." She returned the smirk, finishing off his slice of melon before motioning him to head back inside. "Which is good timing! I've bought several sacks of cured meats I know you'll love. Several which are demon beasts mind you, but I won't spoil the fun and say which.
​-The End-
​​​​​​Artist Comment:

I wanted to talk more about my Gumball Warrior produce, so here's a silly little illustration and one-shot about South Nova's delicacy- the Arctic Melon!! It's a very rare fruit, and an equally delicious one as well. Unfortunately, when a non South Novan eats it, the Arctic Melon is tasteless. Meta describes it like water, so he doesn't understand why Kes and Bate praise it so much. XDDD

And yes, Kes does eat Demon Beasts. It was revealed in this piece of literature here. Arthur always calls her one since she has an outrageous appetite.
Species © Nintendo/ HAL Laboratory
Interpreted characters created from said species © Rhylem