​
​It was a familiar sound she’s heard plenty of times in the past. She first discovered the sound one evening while she was filing her husbands talons. The small, adorable chirps he purred with each breath as she tended to his wings. She didn’t think ANYTHING would be as cute as that, but……

“You truly are your father’s son.” Ellie giggled once she heard her son softly chirping to himself.

It was the first time Kade had to get his talons filed, and after much coaxing to get him to even go near a file, Ellie discovered that he enjoyed being pampered just as much as Bate.

Once finishing the last one, Ellie gently set his wing down and noticed, like Bate, he fell asleep during the filing too.
​
-End-

Continuation to this illustration here...but with Kade!!! =,D
​ 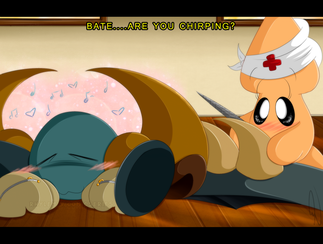