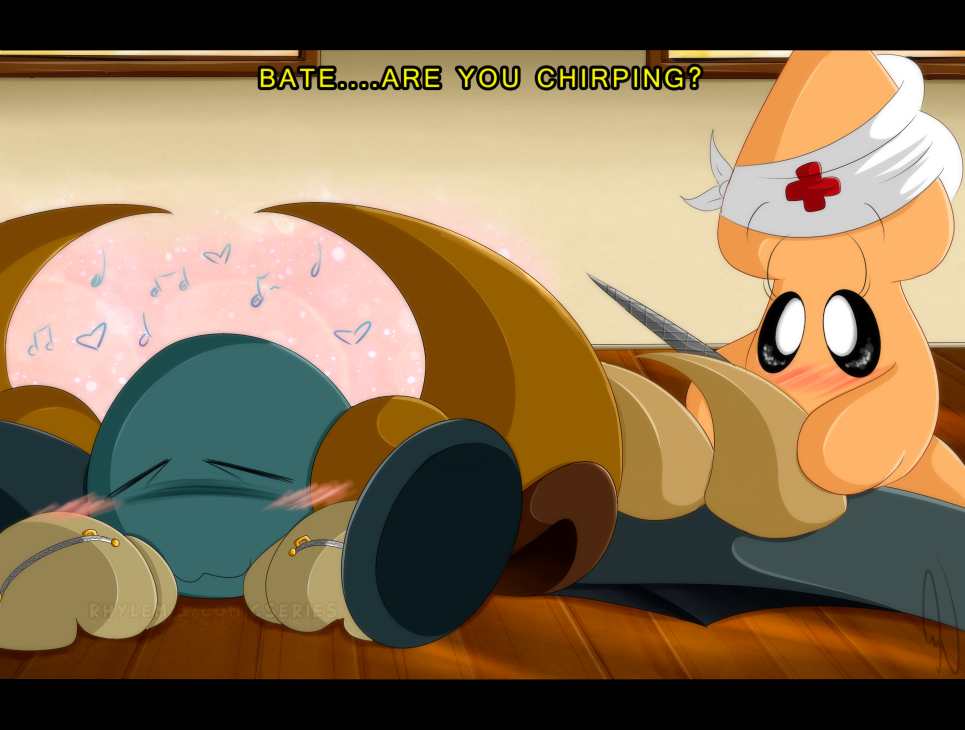 
​
​The adorable, soft chirps and tweets coming from the Puff quickly caught Ellie’s attention when she began filing his talons. She never heard him produce such a strangely cute noise before, and the Squishy couldn’t help but laugh.

“Bate....are you chirping?” She asked as she continued to giggle as he lightly chirped with each breath he took. “You sound just like a bird.”

When Bate didn’t respond, Ellie stopped filing and walked over to his side only to find the puff blissfully dozing off.

“Bate?” She loudly tapped the file on one of his pauldrons, and the Warrior woke with a startle and looked around the room in confusion.

“O-oh, Ellie- Did you finish already?” He asked as he gave a small yawn and stretched his wings.

“I only finished one, but you were…” Ellie paused. Did Bate not realize what he was doing this entire time???

“Huh? I was what?” He slightly turned to glace at her.


“You....ah.....were....” She paused to recall what happened before telling him since she wasn’t really sure how to explain it. Surly after being together for several months she would’ve heard him chirp before. Maybe she heard wrong? Then again, maybe he actually does chirp when he’s being pampered or tended to.

“Well....” She finally spoke after thinking it through for a bit. “As I was filing your talons....I...ummmm....heard something.”

“Heard something?” He repeated. “Like…someone knocking on the door?”

“Not like that kind of noise, Bate. I mean it was coming from you.”

“Me, really?” He pointed to himself. “Well, you already know I don’t snore, so it couldn't have been that.” He denied what he clearly does on a daily basis.

“No, it…didn’t sound like snoring.” She said, “It was more along the lines of....ummm...a bird chirping? I know it sounds strange, but that’s what I thought I heard. Silly, right?”

The Squishy carefully made her way around his massive wings to confront him, and when she faced the Puff, the large pink blush covering his face convinced Ellie she knew she heard right.

“So you were chirping.” She covered her mouth to suppress her laughter. “Oh, Bate, that’s ADORABLE!!! How come you never told me about this?"

“E-Ellie, I…I wasn’t chirping. I…I was trying to clear my throat.” He tried to think of an excuse for the noise, but was quickly drowned out by more awes and coos from her. The flustered warrior could only cover his face in embarrassment as she went on how sweet and precious he was because of it.