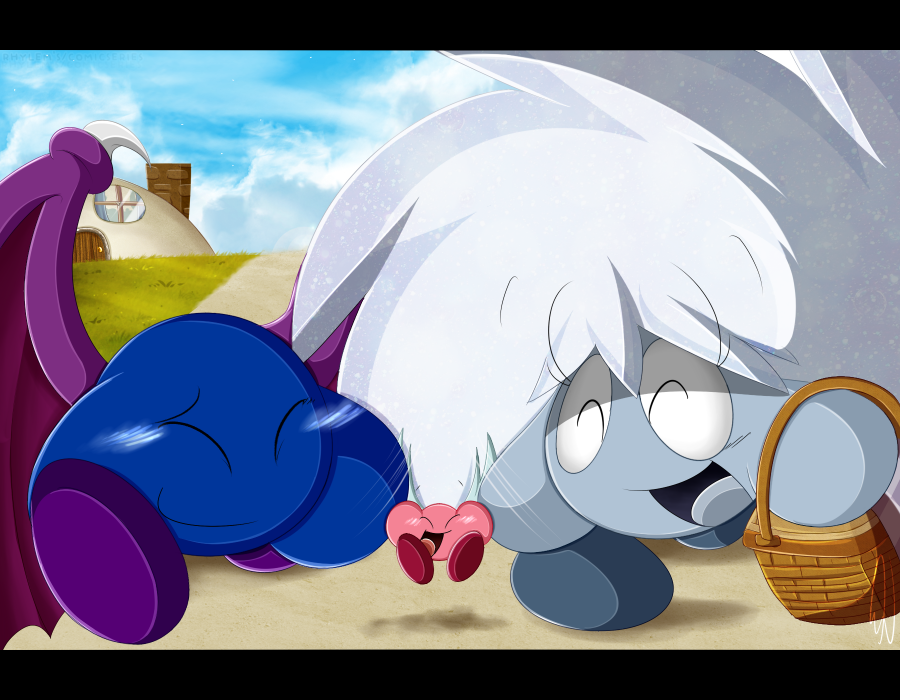 "Don't forget to bring along some of your toys." Meta called out to the child as he and Kes were trying to finish making their lunch for the afternoon. After a rather weary morning of trying to coax Kirby once he saw the damaged kite, Meta begged to NOVA that a nice afternoon picnic at the park will help ease the troubled warrior. Both made sure to make Kirby's favorite treats along with some extra sweets just in case he ends up making some new friends. Just the thought of having Kirby smiling again cause Meta to do the same. There had to be someone who could befriend the little warrior.

Kirby toddled to the living room carrying several stuffed animals and a large bouncy ball. Meta headed towards the puff and gently patted his head. Since the incident, he tried his best to lighten up his usual strict demeanor. With a small smile, he helped Kirby pack his toys before picking him up. They headed to Kes who was just about finished packing everything in the basket.

"Ready!" She smiled, holding it up.

With the trio now ready to head out, Kirby eagerly smiled since he hasn't went to the park with the pair in such a long time. Most of his days are spent training with one or the other. Sometimes he'd go to the park by himself, but it was awfully lonely without one of them. But today he gets to spend it with the both of them! A picnic no less, today was sure to be a much better day than yesterday.

Once they arrived, Meta scanned the area and led them to a small opening where they could unpack. Kirby patiently waited as the pair unfolded the blanket and began setting out all the food they brought along. Heading to the basket, the toddler rummaged to see all the goodies, and gasped when he saw one of his favorite treats.

"Pudding cup!!" He quickly grabbed it.

"Nuh,uh-uh." Meta swiped it from above and nudged the toddler to go out and play. "You'll have your treat later. How about you play for a bit while we get everything set up. We'll call you when lunch is ready, okay?"

Kirby glanced at the playground a few feet away from them. There were a few others playing, and Kirby waited a bit before finally nodding and running off to join them. When the small Puff arrived, the group of kids didn't look nearly as intimidating as Marx, so he spoke to them.

"H-hi. Can I play with you too?" He asked, not sure if they wanted another in their group. To his relief, they all nodded. A Bronto Burt around his age held out his wing and lifted up a small juice can.

"We're playing kick the can right now. I'm it, so join the others and hide while I count." He gave him a cheeky smile as he set it down and began counting.

In the distance Meta and Kes happily watched as they saw Kirby run and hide with the others. They've never seen him this happy since he's only usually this boisterous and bubbly when he's around his cousins. It was quite refreshing to see him make new friends with others his own age. Kirby was so caught up in playing, his hunger for sweets was set aside as he continued to play throughout the afternoon. The two elders eventually had to call him over to eat, and Kes decided to fetch him since he was unable to hear their calls. She saw him on the jungle gym with the others, and couldn't help but let out a small laugh. She felt a bit bad she had to disrupt their playtime.

"Kirby, it's time for lunch. You can play with your new friends when you're done."

"Awwwwww....." Kirby softly wined, slowly making his way down. For once he didn't feel hungry, and wanted to continue playing. His group of friends noticed, and gave him a supporting smile.

"We'll still be here." One of them spoke up; a light green Waddle Dee.

"Yeah, don't worry about it!" A Burning Leo piped up soon after.

"Well, okay...." He nodded and gave a small wave to the group before Kes picked him up. It didn't take long for Kirby's hunger to return, because Meta clearly saw the boy drooling at the sight of the large spread served before him; Sandwiches, Riceballs, chicken strips, macaroni salad, fruit slices, and even cupcakes!!! Kirby eagerly reached for one of the chocolate cupcakes, but Meta's voice caused him to head towards the sandwich instead. Taking a few chomps, Kes handed him a juice box soon after.

"Having fun with your new friends?" She asked, even though she clearly knew the answer.

"Yeah!!! We played kick the can, then we went to play on the swings, and then the jungle gym!!" He beamed, finishing off his sandwich before taking one of the riceballs. "I told them all about you guys, and how you help protect Green Greens. They asked if you can show them your swords and stuff, but, umm....I wasn't sure if you brought them along.

"I left one of my hilts in the living room. I can go back home and fetch it." She offered since she didn't want to disappoint the group. Meta gave a nod and decided to do the same.

"Will you be okay while we head back to get them?" Meta asked. Kirby's been by himself plenty of times, but he knew the child can be clingy when he wanted to.

"Yeah!!" He nodded. "Is it okay if I share some of the sweets you brought? Pleaaaase?

'Kirby....sharing his sweets?' Meta thought to himself. Surly this couldn't be true, Kirby wouldn't even share with him! They must have some been pretty amazing friends to cause someone as....candy protective as Kirby to share.

"Sure." He nodded, giving him a small pat on the head. "Kes and I will return soon. So don't wander off until we return."

"I won't!" He waved back, before snagging several of the cupcakes and pudding cups to share with the others. He called out to the group when he was close enough, and gently placed everything on the floor so they could pick. "I brought some treats we can all share. There's cupcakes and a few chocolate pudding cups."

"Oh, wow, thanks, Kirby!" One of them spoke, reaching over to grab a cupcake. The others followed soon after, and joined Kirby on the grass as they all enjoyed their treat.

"Next time I'll bring something too!" The Leo next to Kirby spoke. "We can all bring our favorite sweets and share them with each other!"

"Sounds good." The Waddle Dee agreed, finishing off his cupcake. "My mom makes the best chocolate chip cookies, I'll be sure to ask her if she can make some for us."

Everyone was so focused on their treats, they didn't notice the shady figure now looming over them.

"Well, hopefully you'll bring more than what Kirby brought along." The rather snarky voice replied from behind. "Because it looks like he forgot to offer me some."

The group slightly jumped from the one who spoke it, and Kirby lowered his wings in fear when he turned around and saw Marx towering above him. He jumped off of his beach ball; an unamused look plastered on his face that got everyone but Kirby to back away. As much as Kirby wanted to do the same, he already knew Marx was in a sour mood, and he didn't want to make it even worse.

"Gee, thanks for inviting me to play with you. I thought we were pals." He finally spoke and glanced at the cupcake wrappers and empty plastic cups of pudding. "You never offer me any treats while we hang out. Some friend you turned out to be." He said, kicking the garbage aside.

"W-we are, I....I mean...." Kirby's voice started to lower when he heard the others softly speaking to each other.

"M-My mom told me not to hang out with him." One whispered.

"He bullied by younger brother a few months back. I guess he found another to beat up on...."

"HEY! You do know I hear you pipsqueaks talking." He barked. The others quickly stopped chatting and anxiously glanced at Kirby. They didn't want to get in a scuffle with Marx since he's been known to bully anyone younger than him. Leaving him behind would be a terrible thing to do. He's been so nice and friendly to them, there was no way they could leave him to deal with the crazed jester by himself.

"L-Leave Kirby alone Y-You're nothing but a bully to him." The Leo finally spoke up- terror lingering in his voice.

"Oh?" Marx's eyes narrowed and took a few steps towards him. "You wanna take his place, then?"

"I, ummm...." He avoided his gaze and tried to back away with the others.

"Who threw this rock?" His voice alone caused shivers to run down their spines. None spoke as he towered before the group. "Don't make me repeat myself, wh-OUCH!"

Again, another rock hit him. He stepped a few feet back, shaking his head as his anger reached his boiling point. He eyed the soccer ball they brought along, and reeled one of his legs back as he aimed it at the group.

"Fine, if you want to throw things at me, then I'll do the same." He forcefully kicked the ball at their direction. Several of them took the full blow, knocking them to the floor. The others scattered in hysterics when Marx charged at them. He continued to use the soccer ball to hit the others, and Kirby cried out for help before he, too, was hit by a powerful blow to the back of the head.

Pushing himself from the ground, he watched as Marx sneered before stomping on the rest of the desserts and taking off. He tried his best not to cry from the stinging pain of his throbbing head. He looked around and saw the others slowly starting to get up; several of them were crying from their injuries. Kirby tried to give them a helpful hand, but every single one rejected his offer. Kirby watched in sadness as the friends he just made started to leave. They softly apologized to him, saying they would prefer if he didn't play with them anymore.

The small warrior tensed up from the rejection, and eventually turned around to head back to the picnic spot to wait for Meta and Kes to return. Once the pair finally arrived, Kirby ran and cried in their arms.

Kirby finally found a group of friends to play with...but unfortunately it was very short lived due to Marx. D:,

Hmm...I wonder who threw those rocks at Marx.