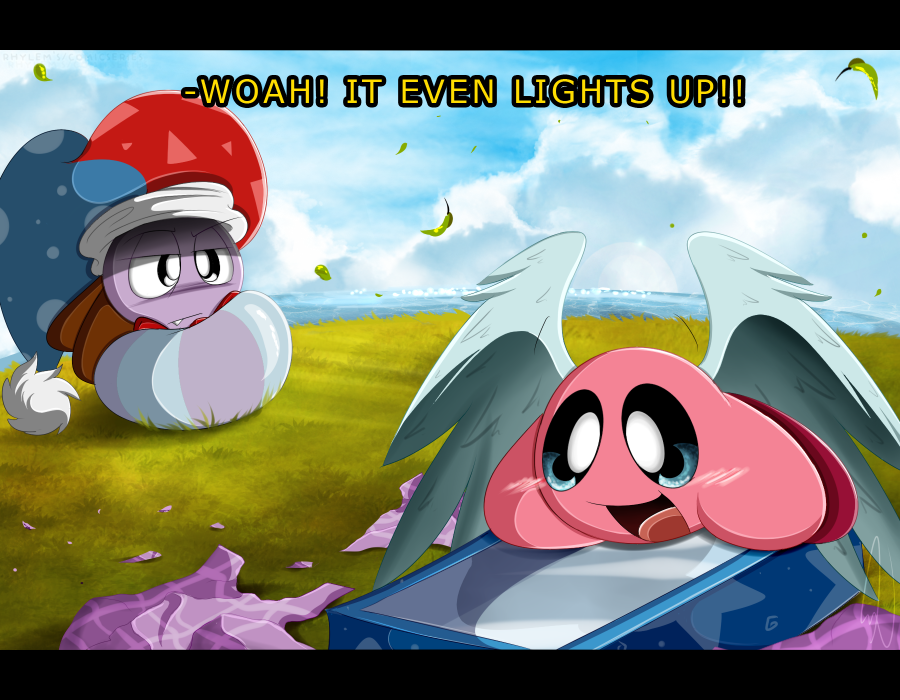 The cheery sound of Kirby's voice was enough to put Marx in a sour mood. He glanced up from the beach ball he was resting on and noticed the warrior had a rather large gift in front of him. It was his birthday a few weeks back, so he figured it was from one of his relatives who hardly visits. He silently watched as Kirby tore the colorful wrapping paper to reveal a star shaped kite. The jester couldn't help but scoff how excited he was getting. A kite, really? What a boring gift. Then again, it was probably from his grandfather. He's so out of date in terms of what to buy, of course he'd be the one to send Kirby something as stupid as a kite. Kirby, however, didn't seem to care and eagerly began unboxing it.

"Woah! It even lights up!! Cool!!!" Kirby held it towards Marx so he can see the small LED lights embellished on the star. Kirby pressed a small button on the reel, and it quickly sparked and blinked; causing the warrior to gasp in awe. Both watched as the colors shifted several times before finally shutting off a few minutes later.

"A lite up, Kite?" Marx spoke to himself, sitting up more. "Well...that seems kinda cool, actually."

"I know! Grandfather Bate always knows the prefect gift to buy." He lightly nuzzled the item before getting up to test it out. Since it was a windy day, Kirby had no problem getting the small kite to take flight. Marx watched as the little star glided through the sky; lighting up once more once Kirby pressed the button. His once disinterest in the gift soon became something Marx was quite intrigued in. Sure, his beach ball was fun to play with from time to time, but it was nothing like the kite Kirby had just got. Jumping off his beach ball, Marx made his way to the little warrior to play with it as well.

"Let it fly even higher, like this." Marx nudged Kirby out of the way and took control of the kite. He released more of the line so it could gain higher distance. Kirby, who recovered from the rather harsh nudge, tried to get it back, but Marx pressed his boot against his face to stop him.

"Kirby, you're going to make me lose control of it, now quit pushing me!" He ordered, releasing even more of the line to the point where they couldn't barely see the star anymore. Kirby started to become anxious when he couldn't spot it, and he started to cry out to his mentor.

"K-Kirby, wait!" Marx hastily hushed him and tried to reel the line back in once he started to cry. Unfortunately, a rather large gust of wind made it much harder to tame the kite, and he called to the other for help. Kirby quickly grabbed the reel, and the pair started to pull on it as they fought the harsh currents of the wind.

"T-Teacher!!!" Kirby called out when he was struggling to keep a firm grip on it.

Kirby could feel his heart skip a beat when he heard the line break. The kite quickly disappeared into the clouds above, and before he could take off to chase it, Meta appeared from behind to grab the child.

"Kirby, no. The wind's too strong and you'll be blown away." He said.

"But my kite!!" He cried, tears falling as he began reaching out to the sky where he last saw it. "Grandfather Bate bought it for me, I have to get it!!"

"You're not going anywhere." He sternly spoke, handing off the child to Kes who was standing next to him. "I'll see if I can find it, but I don't want you running after it, okay?"

Kirby could only whine in the Leo's arm as he watched the elder fly to the direction Kirby pointed to.

"It's going to be okay, Kirby." Kes tried to calm the warrior who was in a fit of tears. She then sharply looked at the other who was trying to back away from the situation. Marx tensed up from her icy stare, and didn't speak a word as he made his way back to his beach ball and scurried away. She was just as intimidating as Bate, and the last thing he needed was to start a scuffle with her. That's how his last beach ball popped, and he certainly didn't want his new one taken away from him.

Once he finally left, Kes tended to the frantic child in her arms.

"Meta's going to try his hardest to find it, so how about we head back inside for now. I'll let you have a small taste test of the dessert I was making." She suggesting, hoping sweets will help take his mind off of it. To her relief he gave a small nod, and the pair quietly made their way back home.

"Did you find it?" Kes asked as Meta entered their home. It was already sun down, and Kirby was fast asleep. Both knew how much Kirby cherishes the gifts he receives from Bate, so Meta tried his hardest to find it for him.

"I did, but...." Meta held up the damaged kite to show her. Almost half of it was ripped to shreds, and a few of the lights that were intact were blinking sporadically. Kes let out a disappointed sigh and took it from his hand. She gave a weak smile to the other, and led him to the living room couch to rest. "You did the best you could, Meta. That little kite didn't stand a chance against the fierce winds today."

"Yeah..." He sighed, and slightly lifted his mask. With a troubled frown, the warrior eyed the damaged gift in her grasp. "Kirby's going to be so heartbroken when he finds out. I went to several toy stores in the area, but I couldn't find anything similar."

"Meta, this is the third time Kirby had his gift destroyed by that Marx kid. Something needs to change, he's obviously a bad influence."

"He needs to find someone his own age to play with. Someone less....destructive." Meta agreed. Ever since those two met, Kirby's been slightly timid to go outside without him or Kes by his side. Kirby says they're friends, but maybe it's because he doesn't know what a real friend should be like. Marx fills the child heads with lies of what that word really means. He would always threaten their friendship when Kirby doesn't share his toys or candy with him, it's no wonder the poor child hasn't branched out and met others. Marx is keeping him all to himself because that's the type of manipulative control he has over him. As long as he keeps Kirby away from everyone, the child will do anything he says. His mentor knew this, Kes knew this, and now Meta's patience reached his boiling point.

"We'll take him out to the park tomorrow. Hopefully he'll meet someone there."

"I hope so. I don't think I can take another incident like this. Poor Kirby was afraid Bate was going to be mad at him for losing his gift so fast. I tried my best to comfort him, but you know how much he admires him."

"I'll explain the situation with Teacher, and see if he can buy another one for him. But for now, we should call it a day." He sat up and motioned to other to do the same. "We have a long afternoon ahead of us."

"Hm.' She nodded, taking his hand to turn in as well.

This is a small story I wrote awhile back about Kirby trying to find a new friend. Meta finally decided to do something about it after Marx caused Kirby's kite to get destroyed. Poor Kirby needs a new buddy, so I wonder if he'll find someone in the next chapter!
Species © Nintendo/ HAL Laboratory
Interpreted characters created from said species © Rhylem