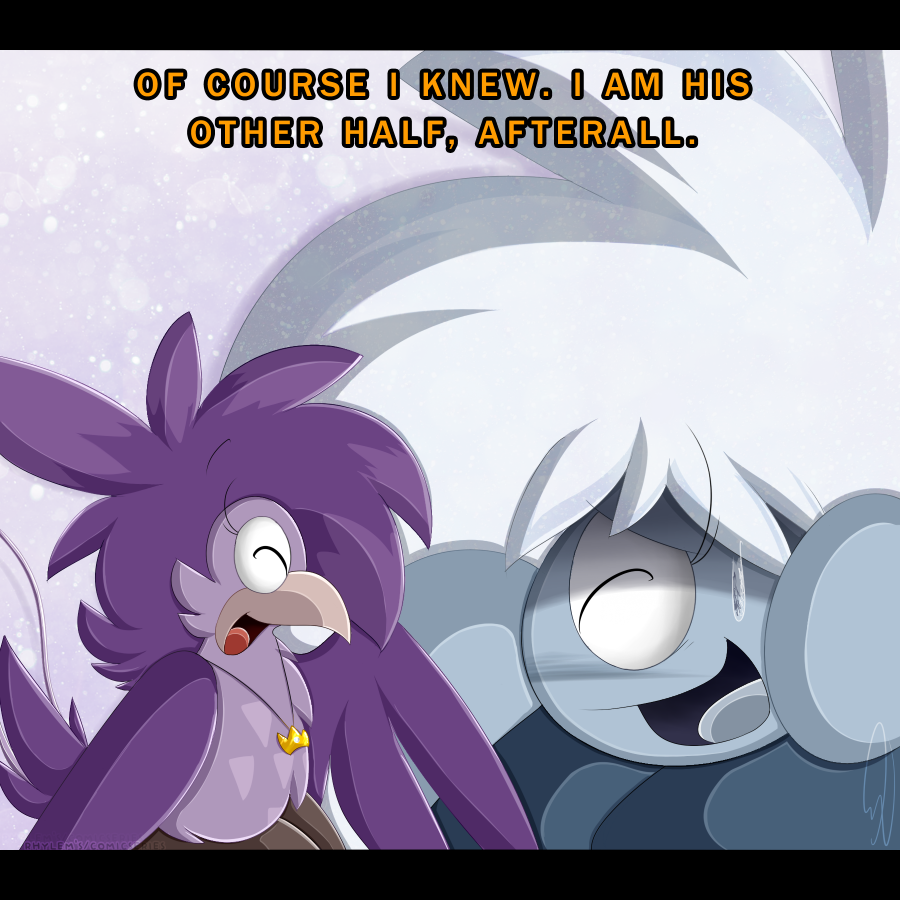 My Other's Other Half
Kes / Meta / Margalo
​
​“Oh, your presence….” Margalo spoke, closing her eyes as she started to recall past, but familiar memories. “Yes, yes…you were once the holder of our Warp Star. Sir Meta Knight gave it to, didn’t he?”

“At one point in time, yes. I gave it back to him a long time ago...or, umm...his mentor did." Kes weakly smiled at the Guardian, remembering how much trouble Meta was in once Bate found out. "I didn't know how important they were until I was much older, so I'm glad he was able to get it back."

"Our Warp Star would've found its way home. It's connected to us, and as such, it's unable to leave our side.  Say, for example, a thief takes it. They would be quite disappointed when they realize our Warp Star is able to warp back to our location; hence its name. It only listens to us, and will not obey another...." She then paused for a brief moment, and eventually spoke up again to correct her last statement. "No, that's not true. There is an exception to this...."

While A Warp Star is loyal to their respective owners, others ARE able to summon and even able to ride one if certain conditions are met. She then looked at the Leo beside her master. She was able to ride it all the way to Kalmari Town. The star did not leave her during her travels, which is surprising seeing how young she was when it happened. Surly her master did not intend for something like that to happen. So if that's the case...

“When a Star Warrior gives another their Warp Star, it’s like they’re entrusting them with their life. It signifies absolute trust in the other due to the powerful bond they share. This is the only exception, and for you to be able to summon our Warp Star, it truly speaks volumes. ”

“I, ah...just wanted to see his mountain of Stuffed animals..” Kes admitted with a small chuckle. She was quite curious to visit Kalmari Town when Meta explained all the amazing, and unique things her small village didn’t have. He was the first outsider she ever met, so of course getting to learn more about him and his town piqued her interest. “I thought he was lying how amazing his room was, but I suppose what he said held up. It was worth the travel, and 5 months of being grounded soon after. ” She playfully added.

"If what you say is true, then my master must have been quite determined to see you again as well." She turned to face her master.

"Other than Miss Atka, I never met another in South Nova. Her home is something I've never seen before, and, well, yeah...of course I wanted to see her again. She's the only friend I ever made there, and I didn't want to lose her so quickly."

"Likewise." Kes agreed. "Meta and Bate were the first outsiders to enter our village in a very lone time. I wanted to know everything about them."

“Hmmm....I see." She softly hummed to herself. "It was a longing to see one another that caused our star to allow you to summon it. If that's the case, I am quite curious to know if you’re still able to summon our star. You visit my master regularly, so the desire to see one another is not needed anymore. It would be of great help if you would assist me with this, Miss Kes. ”

"Sure, I don't mind." Kes nodded from her seemingly harmless request, and turned to the Puff. "It'll be fun, right, Meta?"

Meta on the other hand didn't seem to be on board with the others. In fact, Kes noticed he seems quite skeptical and even a bit frustrated with his other half.

"Maybe another time, Margalo." He spoke in a rather blunt tone, and glanced at the Leo. "Kes and I actually need to head out, we're already running late for our lunch reservation, remember?"

"A-ah, that's right!" Kes stood up. "I completely forgot about it. We gotta hurry before they give our seats away to someone else." She eagerly grabbed the Puff's arm to head out.

"We'll talk more about it once we get back, okay?" Meta chimed in, and gave a small wave to the Guardian before quickly quickly exiting the room. The pair rushed outside, and ran a bit further before they eventually slowed down when they couldn't see Bate's house anymore. Kes then turned around and harshly shoved him.

"You better have a good reason why you told her that, because lying to your Guardian is a pretty rude thing to do.

Kes easily picked up on Meta's lie. But after seeing how troubled he looked when Margalo brought up their Warp Star, she figured playing along would be for the best. Still, it didn't mean she felt terrible for lying as well.

"I know, I know. I don't like lying, especially to her. But you should probably know why she's asking for your help. There's a very important reason behind it, and you may not agree with it once you know."

"Uh...there's an actual reason behind it?" She raised a brow, crossing her arm. "It sounded like pretty normal request to me. Honestly, I'm quite curious to know as well. But I'll bite." She gave a halfhearted shrug. "What's her reason. You seemed pretty bent out of shape once she mentioned it. Is it really that bad?"

"It depends how you feel about it, I suppose." He slightly shrugged backed. "If you remembered what she said earlier, giving a Warp Star to another is like entrusting them with our life. It represents a powerful bond towards each other."

"Yeah, I get that. But our case was different, remember?"

"Hm. Yeah, but that's also the reason why she wants you to try to summon it again." He spoke, stopping in his tracks to face her. "This time, it won't be summoned by a desire of wanting to see one another. If you truly are able to summon it again, what do you think Margalo's conclusion will end up being?"

"Well, I suppose that means we trust each other." She said. "I mean, I trust you, Meta. You know I do, but..you don't feel the same? Is that what you're afraid of if I'm unable to summon it?"

"Kes, of course I trust you. If I had to give anyone my Warp Star, I know it'll be well protected in your care. But..."His voice stressed as she wasn't fully understanding. "While going through such an act represents pure trust in the other, you should know it greatly represents affection and love as well." The warrior shyly rubbed his head. "And knowing my Guardian, she'd do absolutely everything in her power to make sure that becomes a reality. She...ah, can take things a bit too literal."

The Leo couldn't help but stifle a giggle. "I get it. I didn't think of it that way, but I suppose trusting someone with your life does sound pretty romantic, huh?"

"After she witnessed Nonsurat give his star to Marlo, I'm pretty sure that's why she's so eager to find out. I guess she just wants me to find my other...other half. I didn't want you to go through with it until you knew the real reason why."

"Hm, I see. Well, I appreciate the insight. Thanks for telling me, Meta." She warmly smiled at the warrior. "Even if I'm not able to summon it in the end, I don't think that'll change the fact that I greatly value having you around. You're my best friend, after all. It would seem fun to find out, but I think keeping it a mystery would be for the best. I'm in no rush, how about you?"

"Hm, same." He nodded in agreement. " I'm sure Margalo would understand as well. She is my other half, so if I'm okay with it, she should be too."

"Great! But for now.... " She took his arm to drag him to the plaza. "Since you did mention lunch, you should probably uphold your promise and take me out. I'm starving, so let's go!"

The warrior fumbled slightly from being dragged until he was finally able to regain his balance. An amused smile adorned his face as he tried to keep up.


“Miss Kes, are you ready?" Margalo flapped her wings and landed right in front of the Leo- hovering above one of her tails was a small purple Warp Star. “As his Guardian, this will be great knowledge to better help me understand my master. Hopefully we can learn something quite valuable from it."

"A-ah, well...about that." The Leo slightly looked at Meta to answer it for her.

"That won't be necessary, Margalo." Meta cut it and decided if anyone were to break the news, it might as well be him. "Kes and I decided it would be for the best if we didn't go through with it. I would like to leave it at that, if you wouldn't mind, and not to bring it up to Kes unless she's the one who requests it."

Meta extended his arm towards Margalo, and the small bird eventually nodded and returned their Star. "Of course, Sir Meta Knight." Her voice contained no trace of anger, but Kes and Meta could clearly see she was slightly disappointed.

Meta kneeled down to her level, and lightly patted her head. "It doesn't change the fact that Kes and I care for one another. We're both content the way things are right now, so please don't feel bad."

"Yes, I know, my Master. As long as you're happy, then that's good enough for me." She spoke with a small smile.

"Hopefully you can visit during the next cold season." Kes spoke up, and decided to join the two. "It's a shame I'll be leaving tomorrow, but it'll be nice to get to know you better next time."

"Yes, I'd like that." She nodded, glancing up at the Leo with bright eyes. "We still have dinner, so maybe you can tell me a bit about yourself tonight. And this time, my master won't have to lie about reservations."

Kes paled from her sentence, and nervously inched back. "A-ah...so you knew about that...?"

"Of course I knew. He is my other half, after all. Oh, and not to mention he left his wallet behind when you two ran out."

"Margalo!!!" Meta quickly hushed in embarrassment when it was brought up.

"We had to wash dishes for the last hour to pay it off." Kes replied.

The Guardian couldn't help but laugh in amusement when her master looked away once a bright blush appeared on his face. Maybe they were right. Maybe they didn't need their Warp Star to guide them this time. The outcome would've have mattered in the slightest. For a Guardian who relies so much on its guidance, somehow she's okay with that.

I mentioned before if a Star Warrior gives another their Warp Star, it's pretty much trusting the other with their life. A Warp Star is a precious object to both Star Warrior and Guardian, and simply giving it away is not something one should take lightly. It was mention that Kes was able summon Meta's Warp Star during this story here, and Margalo was very curious to see if she's able to summon it once more. x) Meta's not so keen on the idea, and informs Kes the real reason she wants her to try. >v<;;

Anyways, this is actually the first time Margalo and Kes meet! ^o^ Usually Margalo stays with Lady Atka, but she does visit Meta often.  Hopefully they're able to talk more, and get to know each other better next time! And maybe Margalo can share some embarrassing stories about her master to Kes. XDD