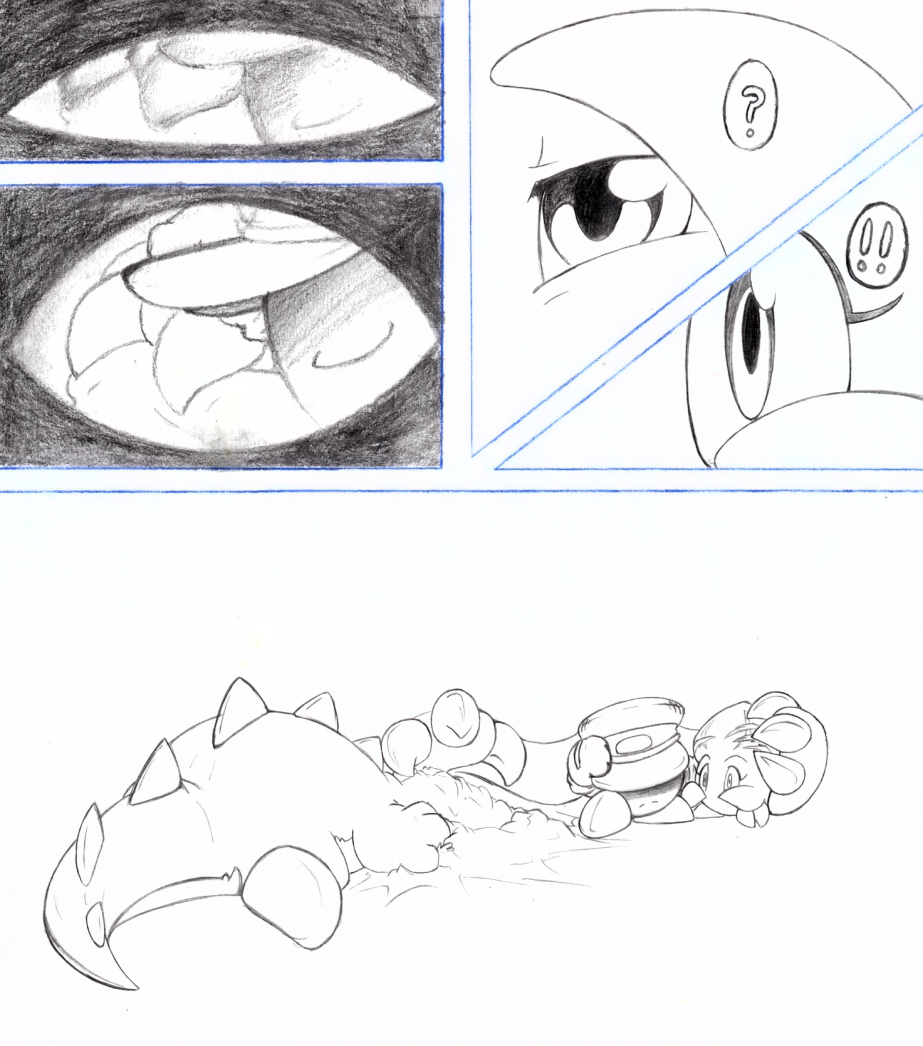 The pounding of her heart made her aware that she hadn't died, and fear gave way to confusion.

How had she survived? There was only one way to find out, and though still shaky with fear she opened her eyes.

As her vision cleared, she found herself standing almost face to face with the very one she'd thought would be her last memory. Bate, the Puffball soldier who had been her patient.

Bewildered, she wondered briefly what had happened to the demon, until she looked past Bate to see its head planted into the dirt.

All at once she realized he had crushed the demon's head into the ground with his wing-claws, and just as quickly she noticed the claws of his other wing against her mantle.

Suddenly her head was spinning.

It wasn't the atmosphere that had grown heavy, it was the weight of his wing curling around her. It wasn't warm air that had banished the demon's cold, it was his own body heat.

It wasn't thunder or lightning that had shaken the ground, it had been his raw strength and fury, and it had been powerful enough to kill the monster in a single blow.

Her thoughts scattered for a moment, then the Puffball let out a breath slowly, as if he too had been shaken.

She blinked, and he spoke without looking at her, "Are you alright, Ellie?" Her heart skipped, and her voice fled.

Again, she was paralyzed.

The scent of fresh rain filled her senses as she understood fully that this was no mere soldier. She was standing in a storm.

With lightning in his eyes and a voice like thunder, this warrior outraced the wind to strike down a beast many times his own size.

Yes, he was like a raging hurricane. He was powerful and frightening, and he could kill easily if he so wished. It was no wonder so many were unable to be near him.

Yet how could such a mighty storm be so gentle? Even as he lifted his claws off the demon's head, revealing the imprints left from the force of his rage, the pressure of his wing around her body was soft.

Even with the strength of his voice, he'd spoken kindly, and he had been worried enough about her to feel the pressure of the danger she'd been in.

When she didn't respond to his question, the Puffball closed his eyes for a long moment. Then, moving slowly, he began to back away, and she felt the pressure lift from her mantle.

"W-Wait!!" Heart pounding she grabbed his arm, then she froze again as he blinked at her in surprise.

She could almost feel the blush on her cheeks as she struggled to put words together. There was a strange fluttering sensation in her chest, a longing for something she didn't know how to describe.

In the past, she had been afraid. She would avoid his wings by instinct because he was powerful and obviously skilled, but she had seen into the eye of his storm and found a warm, caring heart.

Yes, he could be dangerous, but she knew now that he didn't have to be. These mighty wings were not weapons, they were a shelter she could trust.

A quiet moment passed as Bate stared at her, his confusion giving way to a shy smile of his own, and to her relief that warm blanket returned as he put his wing around her once more.

As they stood in silence, her heart beat a little harder as she understood something very important. (This feels right.) Yes, this was someone she could trust with her life.

This was someone she wanted to trust with her life.

When they finally left the forest she asked how he'd known where she was, and he chuckled softly, "Oh, a little bird told me." She wouldn't learn until much later that he'd been serious.
​
For now, she thought it was cute, and decided she would never again be afraid of this man.
​-The End-
This is an old, fan-made comic made by my close friend, Nightlight. She's given me permission to post it here~ =)

Thank you SO much for allowing me to post it here~! Your story is such a lovely addition to the GW series~ <333
​
Species © Nintendo/ HAL Laboratory
Interpreted characters created from said species © Rhylem
Story © Rhylem