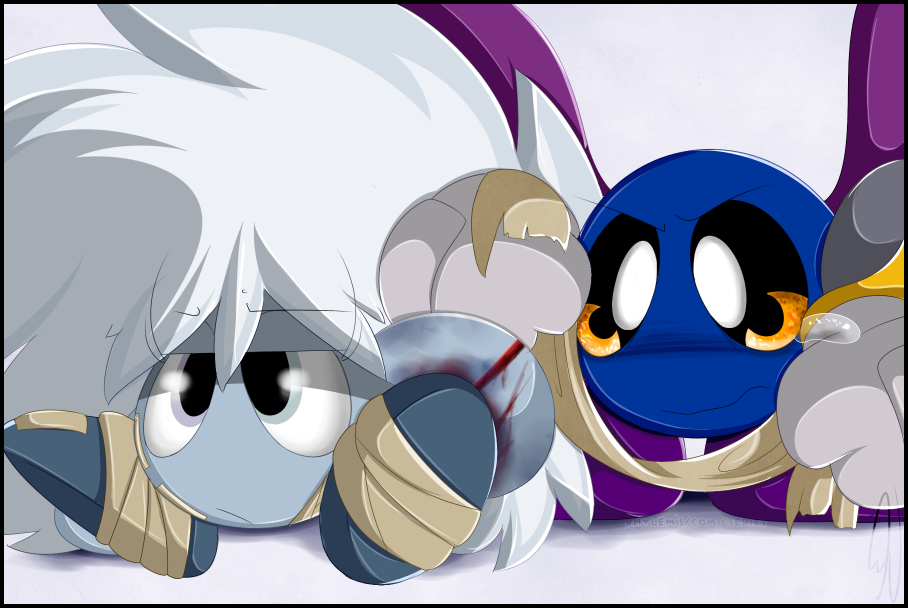 Kes trudged her way back to her home, a smile on her face as she pulled a large cart filled with pelt, bone shards, and piles of piles of meat from a hunt not too long ago. Although she was greatly wounded from it, nothing stopped her from getting back to show Meta and Kirby her haul. She was so excited to see how they'll react. It was the first time since she moved to Pop Star where she went off to go tracking.

Once she arrived at the front door, she gave a few rhythmic knocks before waiting for the other to open it. A few moments later, she heard the knob of the door starting to jiggle, and Kes smiled at the warrior on the other side.

"K-Kes...." He eventually spoke after a rather long silence. His voice trebled as he spoke her name, but Kes didn't seem to pick up on it.

"Hey, Meta!" She moved aside as she was unable to contain her big surprise. Pointing to the cart, she motioned him over to see.  "I went on a hunt a few towns over, and I brought lots gifts for you and Kirby! Tons of meat and plenty of pelt- I've been meaning to make Kirby something, and I even have the tusks and some bones so I can teach him to carve. Pretty cool, huh?"

She eagerly waited for his response, but noticed he wasn't even paying attention to all the goods she brought. He was still focused on her; a mortified expression on his face like he had just seen a ghost.  Before Kes had a chance to speak, he grabbed her arm and dragged her inside the house. She tried to protest, but yelped instead when he nudged her in the living room. She quietly stood while Meta headed to another room before returning moments later with a first aid kit. Kes gave a faint laugh and figured he was more concerned about her wounds.

"Hey, don't worry about it, Meta." She chuckled, trying to make light of the situation. "I'll be fine, how about you help me bring everything inside first, okay?"

Kes flinched when she heard the metal kit slam on the floor.

"Ah...Meta?" She tried to turn around, but his voice quickly caused her to stop.

"Sit down and don't move!" His voice was strict, and Kes couldn't help but feel confused from his behavior. Nonetheless she listened and took a seat. She heard footsteps heading to the kitchen followed by the sound of rushing water. She saw a bowl of warm water placed next to her with several rags a couple of minuets later. Her breathing hitched when she felt his hand lift her hair to expose her back. Grabbing one of the cloths, she slightly winced when he placed the warm rag on her back.

"O-ouch, h-hey, could you warn me next time. A little cold water would be nice, don't you think?" She joked.

He didn't speak and moved to clean her arms and legs. Kes noticed the bags under his eyes and gave a slight snicker.

"Kirby keeping you up again?" She asked since she was curious of the young Star Warriors whereabouts. "Did he get to your candy jar this time?"

"Hey, Meta, what's wrong? Aren't you gonna say something?" Her voice started to lose her cheeriness as she picked up on his sour mood.

"Did anything happen while I'm away? You seem so angry. Are...you mad at me?"

The unnerving silence in the living room was unsettling to Kes. Yes, she was starting to get frustrated by his behavior, but she didn't bother snapping back and held out her injured arm like she was told. Meta, who was dressing it, kept quiet and didn't say a word when Kes kept speaking to him. This only added fuel to the fire as she wasn't too happy from being ignored.

"I don't understand why you're acting this way. I brought home practically over six months worth of meat for us. A little gratitude would be nice for all of my hard work."

She was responded with silence yet again, and Kes could only mumble to herself in irritation. Back home, they'd praise her for such a bounty. They'd cheer, celebrate and even offer to cook her several exquisite dishes from it. But on Pop Star, it was the complete opposite. After she dragged her kill all the way back home, she was shocked to see how livid Meta was. He hasn't said a word aside from ordering her to lift her leg or arm so he could wrap it, and it was starting to irk the Leo. She pulled her arm away once he was finished, and glared at the Puff.

"Are you going to speak to me now?" She spoke, impatiently crossing her arms. "Are you done playing this stupid game of yours?"

"Stupid? I told you to go to the market to buy food, not disappear for the week to track, hunt, and drag home some dead carcass!" He finally snapped, raising his voice to the other.

It was rare when he shouted at her, but this didn't stop the equally hot headed Leo from being intimidated by it. Instead, she just shouted back.

"It was far too expensive! I could easily get ten times more meat if I went out to hunt my own! If anything, you should be grateful! Do you know how much I saved us?!"

"I don't care if it was expensive or not, Kes!" His voice lingered- shifting to a more worrisome tone than before. She noticed, and hearing him act more concerned than angry caused her to do the same.

"Can't you consider the feelings of others before you go running off?! Look at you! You're covered in gashes and bruises!!" His voice raised once more.

Less apprehensive than before, Kes gave a small frown from the realization of her irresponsible actions. She thought she was helping, but it seemed like she was doing more harm than she had thought. She kept silent as Meta continued to speak.

Kes didn't respond in the same manner like before. Instead, she focused her attention on the floor like a child being scolded. Usually she's burst out in a rage for having her skills and ability to hunt seconded guessed, but she instead listened to what he had to say. She didn't think he'd get so upset for leaving- she used to do it lots of times when they were younger. Hunting was in her blood! She was trained and raised for this sort of thing. Meta understood that, and although she'd see him worry from time to time, no outburst could ever compare to the one he had today. Was her actions really that reckless? Was she being selfish? inconsiderate?

She then focused her attention to Meta again. He looked like he was on the brink of tears from the outburst. So with weak, slow steps, Kes went towards the shaken warrior and reached out to hug him.

"I'm sorry." She spoke, her voice slightly cracking from apologizing. "I didn't mean to get you or Kirby worried. I didn't think what might be going through your thoughts when I left unannounced. I can't imagine how worried you must've been. I'm sure I would've been just as worried if you left without informing me...."

Releasing herself from the hug, Kes then took a few steps back and bowed for forgiveness; a common tradition most Ice Leos in the village use. "Please forgive me, Meta. I know I have a lot of things I need to adjust on my end, but I promise I won't travel off like before. If giving up hunting means it'll make you and Kirby happy, then...I will."

The house was silent, and Kes didn't move until she received a response. After a few minutes, she finally heard soft footsteps make their way to her. She felt his glove on her shoulder, and she finally raised herself only to be taken back with another hug.

"Is that what you think I was going to say to you?" His voice, hurt. "Kes, I don't care if you leave. I don't care if you want to hunt or track -Just tell me. Write a note, take my Warp Star, just say something so I don't have to keep wondering when you'll return. I can't change who you are, and I won't stop you from doing what you love,but...at least include us in your world so we don't have to worry."

For as long as he could remember, anytime Kes would visit Kalmari, she would always wander off by herself for days on end. She prefers to be by herself to hunt. She's proficient in her skills and sees no reason to take anyone else along as her knowledge and strength alone will be able to secure a kill. When she comes back, she acts as if everything is normal. She has no regards to anyone else when she leaves and assumes they know she'll eventually return. This time, however, it's different. Meta isn't the only one in her life now...

"He's been up all night waiting for you to return." He answered, leading her into the small room where the toddler was resting. Kes got a good look at the child cradled with many of the stuffed animals they bought for him. She perked up when she heard him shuffle and flinch in his sleep. Wings twitching, legs weakly kicking and small tears visible, the Leo couldn't help but feel her heart tremble with guilt.

"He's been doing it ever since you left, he's...been so worried." He spoke.

Taking a step to the bed, Kes let out a shaky breath as she tried not to break down in tears. She reached out and lightly placed a hand on the trembling child. "Oh, Kirby, I'm so sorry for leaving you. I...had no idea. If I knew how much it would effect you, I would never have left...."

Compared to Kana or Meta, Kes didn't think the child cared for her as much as the others. Sure, she was there to help around the house or watch over them, but most of the time she left him to Meta as they were both Star Warriors. She wanted Kirby to form a strong bond with the Puff, so she didn't interfere unless she needed to. She didn't realize how much of an impact she left on him,though, and just knowing he was up all night waiting for her to return caused her to look away in disgrace.

"He's going to be so angry at me once he wakes up, and I don't blame him..." She gave a pitiful sigh.

"Kirby isn't the type to hold a grudge, especially not against you. Once he wakes up, however, you better believe he's not going to leave your side for quite some time."

"Somehow I'm okay with that." She admitted, giving a small nuzzle to the toddler. Kirby turned to his side, and Kes blinked in surprise when he felt his small shivers slowly start to fade away. A smile slowly appeared on his face, and Kes couldn't help but do the same.

Although the child was still dreaming, she had a hunch he knew she returned safely.
​

Kes receives backlash from Meta once she returned from her hunting trip. At first Kes couldn't understand why he was so angry, but soon realizes maybe her role and presence is much more important than she thought it was.

Takes place after this illustration here 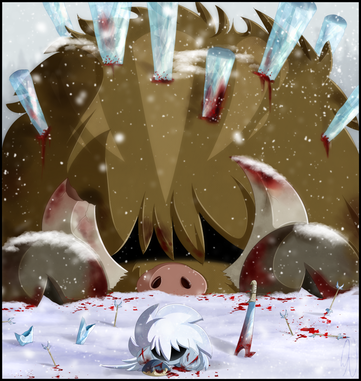