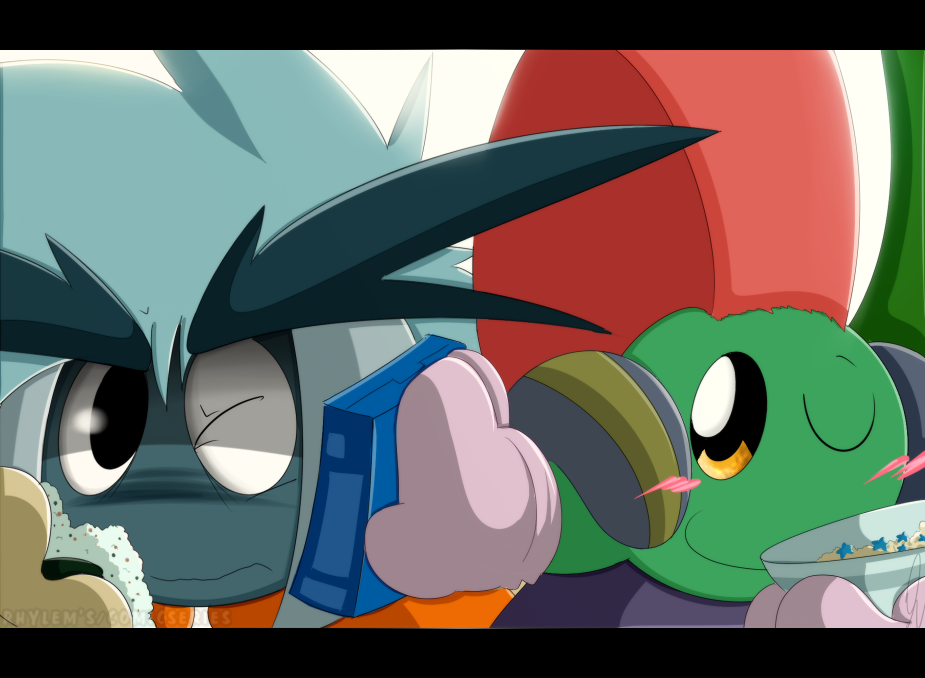 Go on, have a bowl
Lord Pyrell / Drani / Sir Falspar
​
​
​Dear fabulous student of mine,

I hope this package reaches you safely. I’ve recently heard from Dragato that you’ve befriended one of the captains- oh I couldn't be prouder. I know you two will become a great team. Both of you be safe, and remember to watch your back during the harsh battles ahead of you. Of course, I’m not worried- you will do great things, I’m positive.

I’m not sure if they’re feeding you properly over there, so please take my personal stash of some premium Nova Crunch. It’s much better than all the candy Bate sent over to his, I’m sure.

There’s plenty, so go ahead and share it with your new comrade- I’m sure he’ll love it!


Falspar eagerly dumped the boxes on the floor in the living room, and let out a small squeal of joy. It was true, his teacher really did send over Nova Crunch! He ran to the kitchen and pulled out a bowl, spoon and the remaining milk in the fridge. He poured the sweet treat into the bowl and happily scarfed down his first serving before hastily pouring another.

“Oh, Teacher Ramset,” He beamed and took another bite, “You’re the greatest!”

It wasn’t long until he finish the first box, and Falspar turned his attention to his and Pyrell’s room. He didn’t want his comrade to feel left out since he never gets parcels, so with a quick step he ran down the hall and barged into the room. Drani let out a frightened chirp when he kicked open the door, and Pyrell, who was currently at his desk quietly eating to himself, wasn’t fazed by his sudden interruption.

“I’m eating….” He mumbled and went back to nibbling on his rice ball.

“It’s important! My teacher sent me a package!!”

“Ooh, somebody pitch me,” Pyrell sarcastically responded and just focused his attention to the window across from him. He continued eating until something was forcefully shoved against his face. He took a deep breath and tried to calm himself, but the constant pressure against his armor was making it VERY hard to so do.

“Something’s about to be set on fire, and I guarantee you it’s not going to be the box,” He threatened,

“But it’s a gift! My mentor sent it all the way from Kalmari for us to share!"

Drani perked up upon hearing that and flew over to inspect the object in hand. She saw the bright blue box and carefully read the bold words on it, “Nova Crunch?"

“Mhhm!” He hummed and lightly shook it, pouring himself another bowl in the process. Pyrell gave an odd glance at his Guardian, not understanding if this was a joke or not.

“Cereal?” He scoffed, “You’re kidding me, right? Your mentor sent you cereal?”

“That’s stupid,” He said and focused on his own breakfast instead.

“Nuh-uh!!” He took another bite, “It’s the best cereal in the whole universe!”

Drani, being ever so curious of his Master’s comrade, went near the box again and pulled out a few bits from the box. She tilted her head as she inspected the little marshmallow star before lightly pecking at it. A smile quickly formed, and she knocked over the box on the table so she could get more.

“It does…have an interesting, sweet taste to it, my lord,” Drani said, preferring this over the rice Pyrell makes for them every breakfast.

“D-drani!” Pyrell snapped, “Don’t eat that! It....It could be laced with poison or something!"

Pyrell resisted the urge to throw the cereal across the room, and instead just grabbed the box and shoved it back in Falspar’s hands. “That’s not real food, it’s junk food, and I’m not going to allow my Guardian to-“

Before Pyrell could finish, Falspar shoved the spoon in the Leo's mouth. He watched as Pyrell covered his mouth as he frantically looked around for a bin to spit it out.

Falspar slapped his back, which caused the Leo to swallow. It didn’t take long for the Puff to notice the sudden blush form on Pyrell’s face once he was done, and Falspar couldn’t help but give him one of his overly cheesy smiles.

Pyrell could hear Drani giggling in the background, and the Leo poorly tried to deny it. “Well, when it’s coated in unreasonably amounts of sugar, of course it’s going to taste good."

Falspar just took that as a yes and handed him the box. He started to make his way towards the door, but not before giving another one of his boisterous grins. “C’mon,” He motioned the pair to join him in the kitchen, “My mentor says it always taste better when you’re eating it with friends.”

“There’s no logic that eating with others will make it taste better,” Pyrell stated and looked over at Drani to see if she agreed. The Guardian, however, seemed more interested in what Falspar was saying. It was rare when her attention was focused away from him, and he could sense Drani’s growing curiosity and happiness from Falspar’s statement. It wasn’t in his nature to reject or refuse anything that made her smile, so for the sake of her, the Leo took a step forward and followed him out,

“Though…....I suppose enjoying it with Drani would be nice,”

Drani let out a cheerful chirp when she heard his words, and quickly flew to the kitchen; leaving the two warriors in the hallway.  As the pair made their way to the kitchen, Pyrell finally spoke,

Hearing that completely thrilled Falspar, and the Puff gave a squeak of joy, “So does that mean we can spend breakfast together everyday?”

“Not a chance,” He bluntly said as he walked past him;  a slight smirk forming on his face when he heard the petty whines of his comrade for rejecting the idea.