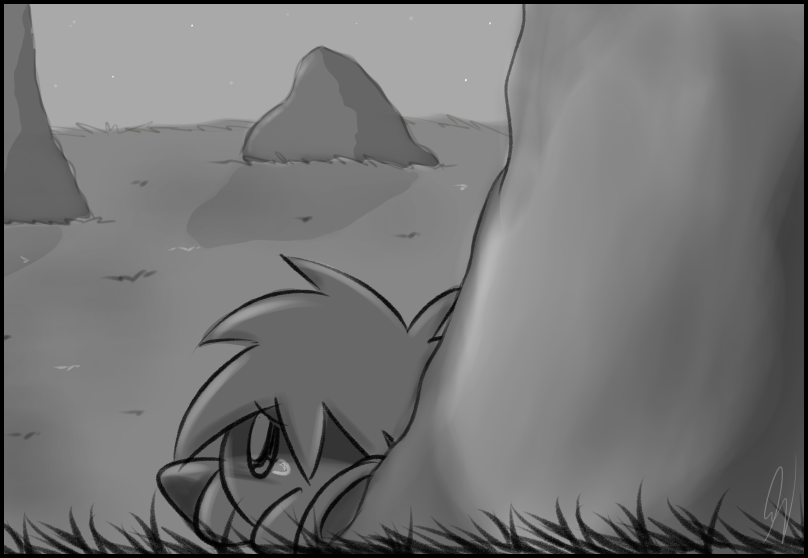 Dragato snapped and shoved the hyper Puff away from his drawing. He looked at the paper and tried to contain his anger. "Stop scribbling letters all over my paper!"

Falspar stepped back and regained his balance from the sudden shove. He held up the red marker and flashed his friend a smile. "Aw, Dragato, I was just trying to make it better." He went towards Dragato's paper again and started marking it. The scenery of the ocean Dragato was drawing now had a mixture of red scribbles on the top, right corner. "See?" He beamed, "He'll love it!"

The magenta puff tried to hold back his tears. He spent the past hour drawing it as a gift for his teacher, and now it was completely ruined. Instead of fighting back, the little Puff started packing up his things and glared at his friend. "I'm telling Teacher Ramset what you did!"

Falspar absolutely hated whenever Dragato had to bring their teacher into this. He always ends up getting in trouble no matter how much he tries to explain himself. He knew if Dragato went to tell on him, the results would likely be the same as the last twenty or so incidents.

"You need to quit annoying Teacher Ramset, Dragato! I didn't even do anything wrong this time!"

"Did so!" Dragato crumbled up the ruined drawing he had in his hand and threw it at him. "And you can show him what you did when I tell him!"

Falspar watched his friend storm off. He knew there was no way to stop him, so he sat down and let out a defeated sigh. He picked up the paper next to his feet and carefully uncrinkled it. He placed his hands over the red writing and frowned a bit, holding back tears as well.

After talking to Bate and Gordon about the issue with Falspar, Ramset decided to head out and find the little warrior. When he finally made it out of Kalmari Forest, he took a quick glance around the entire area before checking specific spots. When he couldn't spot him, he decided to head over to where they usually train. Ramset made it half way to the training grounds before he was stopped by someone.

The Sasuke halted his movements and smiled when he heard one of his students calling him. Although it wasn't the one he was looking for, any student of his was just as important.

Before he could finish, he noticed the little puff was crying. Fear consumed the Sasuke as he rushed toward the warrior and picked him up.

"Dragato, what's wrong? Why are you crying?"

This caught Ramset's attention. "What about Falspar? Did something happen?"

"Oh...." Ramset gave a sympathetic smile and cradled the troubled warrior. "Did he draw all over your picture again?"

Ramset was answered by a small nod. He knew from past experiences that Falspar has a habit of doing this to Dragato. Both warriors got into countless fights that can easily match Arthur and Meta. Ramset sighed and headed to the training ground, still holding Dragato.

"I'll have a word with him, alright?" He gave his student a smile, "I promise that he won't ever do it again."

The little warrior hugged his teacher, "Thank you,"

When both of them arrived to the grounds, Ramset set Dragato down and scanned the area. He quickly spotted a small, pink tuft of hair next to a giant boulder. The Sasuke called out and headed towards him.

Falspar looked up and cringed when he saw Ramset next to a very angry Dragato.

"There he is!" Dragato pointed to him, "Yell at him for ruining my drawing!"

Ramset placed a hand on Dragato to calm him. He kneeled down and picked up the wrinkled paper next to Falspar. The tiny Puff tried to defend himself.

"I...I didn't do anything wrong, I swear!" He started to softly mumble, "All I did was write something for you....I thought you'd like it."

Dragato grabbed the paper out of his teacher's hand and looked at the drawing. "Stop lying!" He yelled out, "It's just a bunch of random letters! It doesn't make any sense!"

"Does so!" He snatched it from his hands and pointed to the letters. "It says "To Teacher Ramset, From Dragato."

Dragato rolled his eyes in annoyance and looked away. "Tell him to quit lying, Teacher Ramset! We all know he's just saying that as an excuse."

"Enough, you two. Honestly, both of you are starting to act like Bate's students." Ramset took the paper and studied the words he wrote.

It did in fact say what Falspar said, the only difference is that the spelling was way off. Through the eyes of Dragato, it really did look like a bunch of jumbled words.

'Bate was right.....' Ramset thought to himself. He let out a sigh and decided he needed to talk to Falspar one on one about this.

"Dragato, let me handle this, alright? Head back home and we'll both meet you there when we're through."

The little Puff was hesitant, but agreed.  When Ramset saw that Dragato completely left the area, he sat next to Falspar and put the paper in between them. He fiddled with his hat a bit before finally making eye contact with the warrior. He knew he couldn't turn back now- this was it.

'Alright, Ramset, prove to Bate that you're capable of doing this.' He said to himself, trying to gain confidence in his words. But no matter how hard he tried to ease his nerves, there was no denying it; he was absolutely petrified.
​