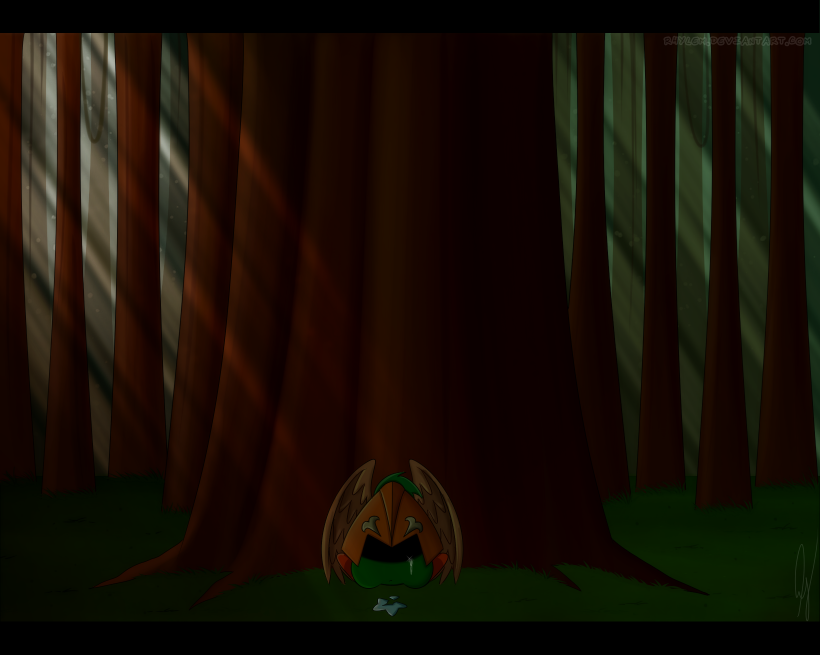 ​
Tears of a Star Warrior

Meta wiped the tears streaming down his face. "How could you not go back?! They need us!"

Arthur didn't speak. In fact, he didn't even bother turning around to face Meta.

"If we don't go back to Kalmari, then everyone we know is going to die!" He pointed to the broken Warp Star on the ground. "We need to save Teacher Gordon and Teacher Ramset!"

"How do know they're not already dead?" Arthur spoke; his voice, lacking all emotion.

Meta froze. Arthur's words sent a chill up his spine.

"Do you even realize what you're saying?!" Meta walked over and spun Arthur around to face him. "Do you care about your safety that much that you'd sacrifice our teachers?!!"

"Answer me, now!" He demanded.

When he didn't, Meta shoved him and started to walk away. "Fine, go ahead and be scared. I'm not going to sit around while those demon beasts kill the ones who raised me." He continued to walk away from the group.

"Take another step, and I'll be force to hurt you, Meta." Arthur stood up.

"For what?!" The puffball turned around. "You're not the boss of me, Arthur! Teacher may have deemed you leader, but that doesn't mean I'll obey you!" He looked at him one last time before leaving.

"And you call yourself a Star Warrior...how pathetic." He muttered his final thoughts to him.

Before Meta could take another step, he was forcefully slammed into the ground. He struggled to get up, but his efforts were fruitless.

"Listen here, Meta."  Arthur picked him up and pinned the Puffball to a tree. "I'm not going to let you go back to get yourself killed! Hate me, despise me, loathe me, do what ever you want, I don't care! They're dead, so shut up and get over it!"

He gripped Meta harder, which caused the younger Star Warrior to yelp out in pain. The other three warriors watching the scene unravel were mortified. They've never seen Arthur get this angry before.

"Hey, Arthur," Falspar spoke up. "You're going to really hurt Meta if you don't let go."

"He needs to be taught a lesson, Falspar." He glared at Meta. "And if it means I have to break his wings, or a leg to prevent his foolishness, then so be it."

Meta bit his tongue and tried to fight back. It was useless, however; Arthur could easily snap his wing or break one of his bones in the position he's in right now. He closed his eyes, tears falling from his face.

Arthur released his grip and looked at the figure wallowing at his feet. "Know your place, Meta. There's a reason why I was put in charge." He started to walk back to the rest of the three.

Meta used the base of the tree as support to help him stand. "Only a cold, heartless being like yourself would still be able to move on and forget about the ones who protected us for all these years."

He started to limp towards Arthur. "Do those years we spent in Kalmari not matter anymore?" His voice started to tremble. "Are you just going to throw it all away and pretend like it never happened?

"Teacher, Teacher Gordon, Teacher Ramset...everyone we ever knew. How could you just throw it away so easily? How could you not shed even a single tear for them?

"It was all a lie, wasn't it? You never cared about our home! If you'd allow our mentors to get killed without even hesitating, then it just proves how heartless you really are!!"

"Meta, that's not true." Dragato stood up to defend his leader. "Arthur does care."

He looked at the cracked Warp Star Bate gave them. "I thought you cared about Teacher more than anyone...but I guess I was wrong. He's nothing to you, isn't he?"

"I bet if I died, you'd probably do the same. Some leader you turned out to be."

He walked off a few feet where the fight had irrupted. Dragato, Nonsurat and Falspar looked back at their leader. He hasn't moved an inch after what Meta told him.

"You know how dramatic Meta gets when he's angry." Dragato walked towards him, hoping to calm the tension. "He'll be fine by tomorr-"

"No, Dragato." Arthur whispered. "This time is different."

Arthur took off his helmet. Dragato noticed his eyes were filled with tears.

"If I didn't care about him, then I would've just let him go back to Kalmari."

"We know." Dragato hugged the elder Puffball. "Meta just needs some time to understand it."

Arthur picked up the cracked Warp Star and walked away from the group. "Yeah, me too."

Arthur sat in silence for a few minutes, observing the Warp Star in his hands.

"You're not coming back, are you?" He spoke to the cracked object. "I expected you to swoop in and stop Meta and I from fighting back there."

He mused at the memories when he was younger. He lightly chuckled at all the times Bate had to separate them with his wings. He was so used to his mentor interfering, he had hoped 3 giant claws would lift him up while he was fighting with Meta earlier. He frowned knowing that no one will be there to stop them when they fight.

'He's nothing to you, isn't he?' Meta's words suddenly echoed in his mind.

Being the leader, Arthur always tried to be strong and brave for the rest of the group. He knew full well that being a leader would bare a great amount of responsibility on his shoulders, but if his mentor believed in him, then he knew he could do it.

Arthur clenched the Warp Star in his hands. The weight of leadership was far too great to handle. Arthur, the egotistical Puffball who rarely showed emotion, broke down and started to cry.

"T-teacher Bate...w-what do I do? Y-you promised you'd always be there for us." He wiped away the tears, but more continued to fall.

He knew Bate was more than a teacher or a comrade. Other than being trained under him, both would talk, eat, fly, nap and even play together. Bate was the one he looked up to whenever he was feeling hurt or scared. Arthur knew he would always be there to help him if he ever needed guidance.

THIS IS AN AU!
​
This is Arthur's side of the story, and how he deals with the loss of his mentor. He breaks down after the fight with Meta. :< He keeps Bate's busted Warp Star under his helmet to remember him by.