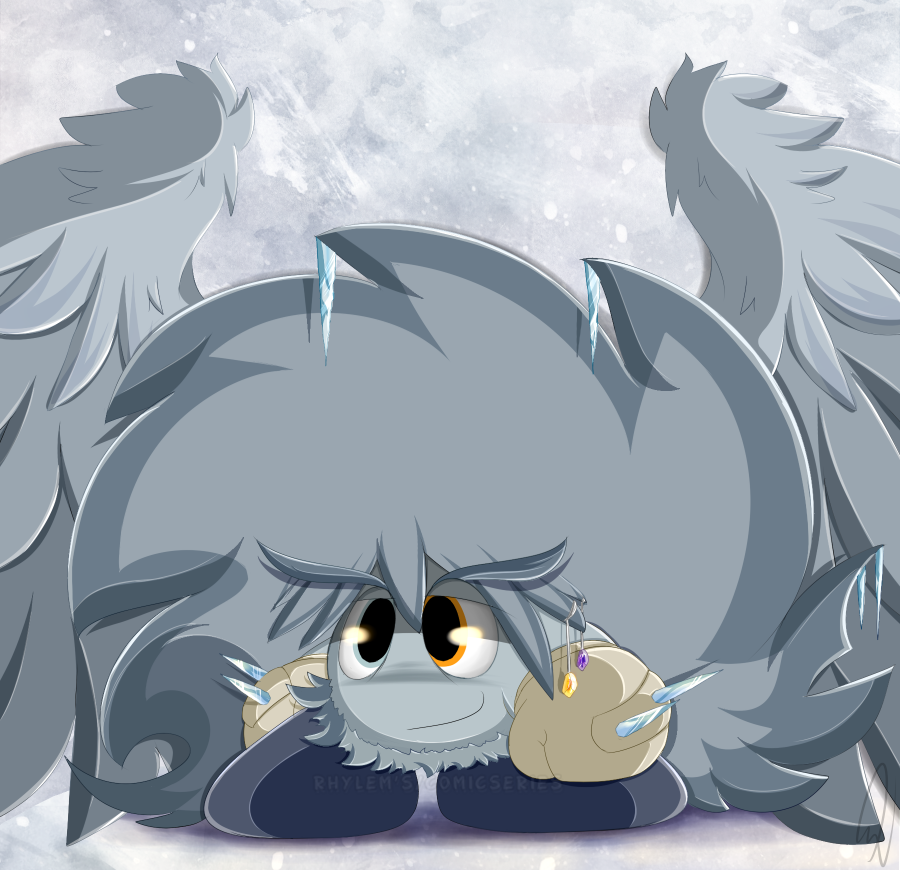 Ooooh, he looks so much like his grandfather. The genes run STRONG in Kes’ family. Meta’s runty little genes couldn’t stand a chance. XDDD

Spoilers below, but if you wanna know more keep reading~!

Tulok left Pop Star as a teenager after an incident that almost killed him. During an unusually warm summer day, Meta rushed him to the hospital when he saw his son unresponsive in bed. The doctor informed his family that the Pop Star summers are no longer suited for someone as temperature sensitive as Tulok. He also gave them the unfortunate news that he suffered organ failure, and lost his kidneys because of it. Thanks to Kirby donating one of his, Tulok slowly began to recover. Of course, it did not change the fact Tulok still needed to move to an area that’s better suited for him. Once he was well enough to leave the hospital, he had to head to South Nova.

While Tulok is excited to finally live and train with his Grandfather, a huge part of him misses Pop Star. His big brother Kirby, Gooey, his friends, his home…..all the food. >v< Settling to a simpler life isn’t going to be easy for him, but it had to be done. When he finally arrived with Meta and Kes by his side, Wulfric did everything he could to make them feel at home. Tulok has never seen him so happy in all his life. He figured since his Grandfather lives alone, having his family move in greatly boosted his mood.

For the next several weeks, it was all about Tulok recovering and getting used to his surroundings. Winter only lasts 5 or 6 weeks on Pop star, so Tulok struggled a lot during the warmer seasons, especially Summer. With South Nova, it was like a breath of fresh air. Tulok doesn’t have to worry about maintaining his temperature anymore. The fear of heatstroke is but a distant memory.

Meta and Kes saw his health greatly improving- It would’ve taken at least twice as long to recover on Pop Star or Kalmari. Meta and Kes could see a huge shift in his behavior. He’s more energetic, and happy. Kes also noticed how guilty Meta felt for not allowing Tulok to move in sooner. It almost cost the life of his son, and he feels terrible for being the one to cause it. Although Tulok doesn’t blame him, Meta apologizes for all the trouble he put him through, and tells him he will be a magnificent chief and warrior once Wulric steps down.

Meta would stay on South Nova for several months before heading back to Pop Star. At first he didn't want to leave due to the fact Kes would be staying behind. Kes tells the heartbroken warrior he needs to go back to look after Kirby while she stays and watches over Tulok. She promises they’ll one day live together again, but for now they have to be apart for their boys. Meta tells Wulfric to protect his son while he’s always, and not to let anything happen to him. Wulfric reassures his son in-law and tells him he will do everything in his power to make sure Tulok is strong enough to protect not only himself, but the village as well.

The illustration above is Tulok as an elder. He’s the powerful chief of the Ice Leo village, as well as a father and loving husband. He takes his responsibilities as the leader with the utmost seriousness. He is a mentor to future generation of Leos, and a protector to his kind. He isn’t embarrassed about his differences like he once was as a kid (eyes / wings) anymore and embraces them. His wings are one of his most powerful assets, and he uses them in battle often. Like his Grandfather and Mother, his ice abilities are a force to be reckoned with, as well as his abilities to wield weapons.

Dangling from his hair, he hangs the shards of two Warp Stars. The purple shard belonging to his late father- Meta Knight, and the yellow for his brother who recently passed on, Kirby. He still wears Margalo's feather as well- usually when he's not outside the village walls since it's so fragile. Kes is still alive, but she’s incredibly old and is retired from her duties as a hunter. Tulok makes sure she is well taken care of, but anytime he’s busy running the village his kids and wife fill his role and keep her company.

Tulok remained the chief for several long decades until a large earthquake caused one of the pillars of Heavens Spine to collapse. Something like this has NEVER happened before, and no one was prepared for the massive destruction it caused. Aside from destroyed homes and a few casualties, it caused the sheet of ice below them to crack as well as sending an avalanche towards their small village. Tulok instructed all Leos to seal the floor while he deals with the ravaging wave of ice racing towards their home. Tulok only had minuets to prepare. He raced back home to grab his weapons and armor, and only had time to say goodbye to his mom before rushing out.

No one knows what happened outside of the village walls, but those who were alive to witness the event described a colossal dome of thick ice covering their home. The village became shrouded in absolute darkness when the avalanche hit, and the roaring sound of ice and rock echoed for what seemed like hours. When the trembling below finally subsided, and the roars were reduced to a mere breeze, a small piece at the very top of the dome fell off. It took several warriors to climb out since the walls surrounding them couldn't be destroyed for some reason. Once they reached the top and climbed out, none could believe what they saw. Their entire village, as well as the area that's been affected by the avalanche has been engulfed in thick layer of snow and rock. Everyone would've been buried alive if Tulok didn't shield them.

A hunting squad quickly assembled to look for their chief, and eventually a body was retrieved not too far from their home. Everyone eagerly waited for the return of Tulok, but when the pack returned to report the loss of their leader, a feeling of hopelessness could clearly been felt throughout the village. Kes took over as leader; being the oldest and shortest chief in the history of their village as she only served for 1 day to give her speech to honor her fallen son before quietly passing away in her sleep that night.

With everything destroyed, and no leader to help pick up the fallen pieces, the recovery process was a very slow one. In time the village will eventually recover, and a new chief was picked to oversee Tulok's duties. The village will thrive once more, but the scar left by the disaster will continue to haunt several generations for years to come.
Species © Nintendo/ HAL Laboratory
Interpreted characters created from said species © Rhylem