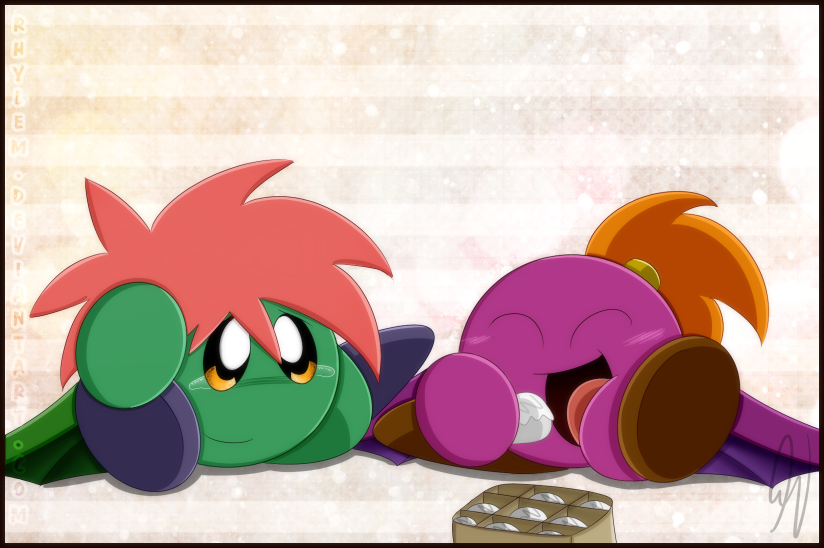 ​
Dragato cautiously eyed the box Falspar put in front of him. It was a simple beige box wrapped with a bright, blue ribbon. The little warrior poked it a few times and glance up at Falspar, guarded.

"What is this?" He asked, shoving the box away. "If it's another prank, don't bother. I'm not in the mood, alright?"

Falspar furiously shook his head. "N-no! I promise, it's not." He pushed it back to the angry puff and sheepishly rubbed the back of his head. "It's a gift." He said, "An apology gift."

"Apology gift...?" Dragato picked up the box and shook it a few time, curiosity now consuming him.

"I bought you something. For ummm...." His voice started to get low, too ashamed to say it. Eventually he spoke up again when he noticed Dragato was still waiting for an answer.

"It's for ruining your drawing a few days back." He quickly said, "Please forgive me, won't you?"

"You....bought me something?" He said, shocked. "With what? You always spend your allowance buying dumb props for your pranks."

"T-teacher Bate gave it to me. I helped him all day doing house work." He let out a tired yawn, still winded from spending the whole day cleaning. "In return, he bought me your gift."

Dragato couldn't believe what he told him. Falspar, among other things, hated cleaning with a passion. And he spent the whole day doing something he hated, for him? He shook his head in disbelief, not sure if he should believe in his story. He looked at the gift sitting in front of him and decided to see if Falspar was, in fact, telling the truth. He held his breath and untied the bow holding the box together. He carefully lifted up the top and....

"I know they're your favorite." Falspar gave his friend a small smile.

The little Puff beamed with excitement when he saw the box was filled with his all time favorite treat- white chocolate truffles. He looked back at his friend, astonished.

Falspar nodded. "Really! Ah, and don't worry. I made sure to let Teacher Bate know to buy the right type." He said, reassuring Dragato that they were sugar free.

The little warrior carefully picked one out of the box and took a bite. His mouth tingled from the spectacular, unique taste of the little truffle. He let out a small squeak of pleasure when it was finally finished.

"Where did you get these from?" He asked. It didn't taste like the normal truffles he usually buys. It tasted much sweeter- richer, one could say; without the horrible aftertaste of the sweetener.

"Teacher Bate and I traveled to another town in West Nova. He told me it was known for their chocolates." He explained, though still questioning how the elder knew about said place since he apparently wasn't fond of sweets.

"And you traveled all the way to another town just to buy them for me?"

"Of course!" He got up and sat next to him, "You're my friend, and I would do anything in the world if it'll mean you'll forgive and trust me again." He put a lot of emphasis on the last part.

Dragato gave his friend a light shove, quickly catching on. "Alright, I forgive you." He said, nibbling on another truffle.

Falspar gave a sigh of relief and leaned against his friend. After spending the whole day sweeping, organizing and dusting the elders home, he was ecstatic his apology gift worked. He closed his eyes and started to doze off, the work of chores finally taking a toll on him. He reminded himself before falling asleep to work on his behavior. Not because it was tiring to ask for forgiveness, but because he saw how much it deeply hurt his friend.

'Thank you for giving me another chance, Dragato." He glanced at him one final time before falling asleep.