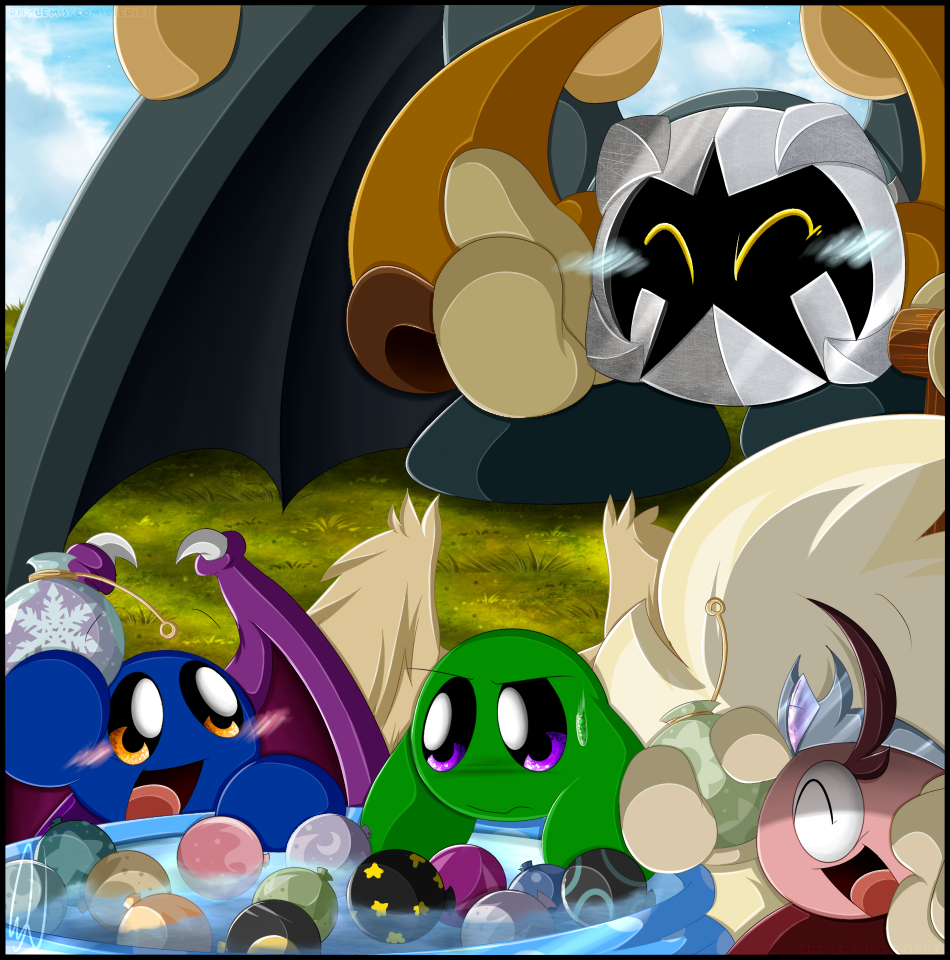 Yo Yo Tsuri!
Bate/ Meta/ Arthur/ Petta
​
Summer is always fun when the time comes for it. No school, no real training, for any and all children it’s probably the best time of year, perhaps second to winter break and the holidays. Meta and Arthur and the rest know how to make use of the time.

Festivals make it much better for all the games that come with it, but festivals, as many as there might be, only come once a year. So Bate decides to give the children a little gift to help them pass the time and brighten their days.

The children gravitated towards it immediately the moment they came to visit. They’re a cluster of hair and wings surrounding the lip of the little pool that’s just double their size, filled to the brim with water and topped off with water balloons decked out in an array of colors. Meta is too busy admiring it right then, but Arthur recognizes it right off the bat.

Petta, Arthur’s little friend, looks over at the older warrior who stands with his cane, a happy squint in what she can see of his expression. “Yep,” He says, not unamusedly, “It is. You all seem to enjoy the game so much that I decided to bring it out of the festival and to the house! That way you don’t need to wait to play it.”

He couldn’t count the amount of times that he would see the children clamoring around this little activity, fishing and trying for prizes with a gusto that he wished they showed during lessons. More than a little enthusiasm, more than a few fights too. Oddly competitive…

“Try not to get into any fights with this one, alright?” He says, as if the warning might actually help any. “I got this to have fun with, but it’s no fun if you all get angry and turn it into an ordeal.”

Meta isn’t even paying attention. Star-struck as he is, he’s already reaching down to the little cardboard box he’s just noticed sitting beside the pool, taking a paper string in his hand. It takes a nudge from Arthur for him to reach down and grab two more for his friends, and Petta beams when she receives hers.

Arthur looks over at where Petta blinks at him with a grin on her face and feels his face flush in embarrassment, glancing back to the balloons in front of him. She’s always saying stuff like that…

Meta doesn’t pay attention to any of that. His fishing line out and ready, he’s already lowering the hook to the nearest balloon he can reach with the largest rubber band he can see, tongue sticking out in concentration. “You’re gonna lose, Arthur…”

So like almost everything else they do together, it turns into a competition. Meta and Arthur both fight to fish for whatever balloon they can, but Arthur in particular puts his back into it. Petta doesn’t say too much, but she fishes right alongside them and every once in awhile he can hear her giggle before encouragement comes out of his mouth that only makes him try to fish harder. If that’s even possible.

Meta just giggles, but Arthur isn’t paying attention to that right now. He’s on his second paper string, now his third trying to get this one balloon, and the rubber band is just right there, if he could just move his hand a little bit…

Arthur loses his concentration and looks up. Meta is beaming bright, turned to the side to show off his prize to their teacher, and in his hand is a paper string, on which a blue balloon embellished with snowflakes is dangling from its rubber band. Arthur doesn’t know if it’s Meta’s first attempt or his second, having not looked over since they started, but the fact that Meta got one before he did…

“That’s great, Gumball! Quick, too!” Bate nods along with Meta’s excited victory and Arthur feels a little pinch in his gut. It’s just a balloon.

“Well, you won’t get the next one...!”
​
Arthur doesn’t shout but is voice pours with conviction, bringing his paper string back out and concentrating as much as he can. He hears laughter from off to the side and it’s really annoying, but he tries not to think about it. Meta just got lucky. It’s not that easy.

He tries, and tries again, breaking paper string over and over when he sinks it too low into the water. This one balloon is right in front of him and the rubber band is a big one, maybe too big, and he’s convinced he can hook this one. If it would just keep still, he could-

Petta’s voice beside him rings with surprise, tension, and he knows it’s for him because his hook is right on the rubber band, just a little bit more-

Petta stands straight and pulls up a pale green water balloon decorated in a swirl of flowers, eyes shining and her mouth opened just slightly, as though she hadn’t believed she would actually catch one. He’s happy for her, yeah, he congratulates her, but.

Why is everyone getting balloons but him?.

Arthur looks around at both standing on either side as though analyzing their movements would help him some clue. Petta hadn’t played this game quite as much as he and the others in his group had, and Meta…

He looks over at Meta, glances down at his hand. Down at his hand which is currently darting out and swiping up a balloon, no paper string whatsoever. That.

The bark comes with the full force of a child’s fury, Arthur’s wings hiking up as he jabs his hand out accusingly. That makes so much sense now! Of course he got the first one, he must’ve snuck it onto his hook when Arthur wasn’t looking that little-

Meta’s cheeks puff, and irritable violet flush blazing across his cheeks. “No, I didn’t! Don’t be cranky just because you’re losing!”

“I’m losing because you cheated!”

“Um, guys? Maybe we could-?” Petta clears her throat, tries to put herself into the conversation to maybe simmer it down because. It’s just a game, right? And there’s no need to fight over a game.

But they’re already fighting. Shouting and arguing, it’s hard to say who puts hands on the other first because the other returns it with an equal fervor, and quickly she has to back up when they both fall over on top of each other in a mess of shouting, fists, and flapping wings.

And then Arthur and Meta find a titan grip on their wings suddenly, just before visions blur and they find themselves both yanked up a good foot in the air. It leaves Arthur a bit dazed if only just from the shock of it, and by the way he can see Meta’s mouth opening he probably feels the same way.

“What did I say about fighting, boys?”

Bate looks at them with a flat expression on his face which somehow makes Arthur feel worse than if his teacher had actually looked mad.

“And what did you boys do?” He glances at Meta expectantly where the boy scratches his cheek.

“No buts. I don’t want to hear it. I brought this game out for everyone to have fun with, and if you can’t have fun together then you shouldn’t be playing.” He ignores Meta’s squawking about how that’s not fair, Arthur started. Just turns them both around so that they’re forced to look in Petta’s direction. “Now what do we say to your friend who came to visit?”

And Arthur feels really weird in his gut all of a sudden, glancing down so that he doesn’t have to see the concerned look on her face. He’d wanted them both to have a really fun time…

“Good. Now, both of you go inside. You can come out after you’ve had some time to think about your actions.”

Arthur and Meta are set back down in the grass to do as they’re told, and Petta, maybe seeing the look on Arthur’s face, puts up a smile that holds no ill will at all despite the circumstances. “It’s okay…! We can try again later!”

She’s really optimistic. Always has been, at least to him. It makes his cheeks buzz, just a little bit in that way that always happens when he gets embarrassed.

Despite the circumstances and despite his terribly sour mood, Arthur finds himself returning the smile as if to thank her for the encouragement.

Maybe, he thinks as he walks back to the house, he can actually catch a balloon for once next time.

Some Kirby themed Yo yo Tsuri were recently released, and I though it would be super cute to draw Meta and the others playing!! The fun didn't last long, however, as Meta and Arthur get in a heated fight when one of them decides to cheat. oAo;;  The patterns on the balloons look quite familiar. Can you name all the characters they're based off of? ^o^