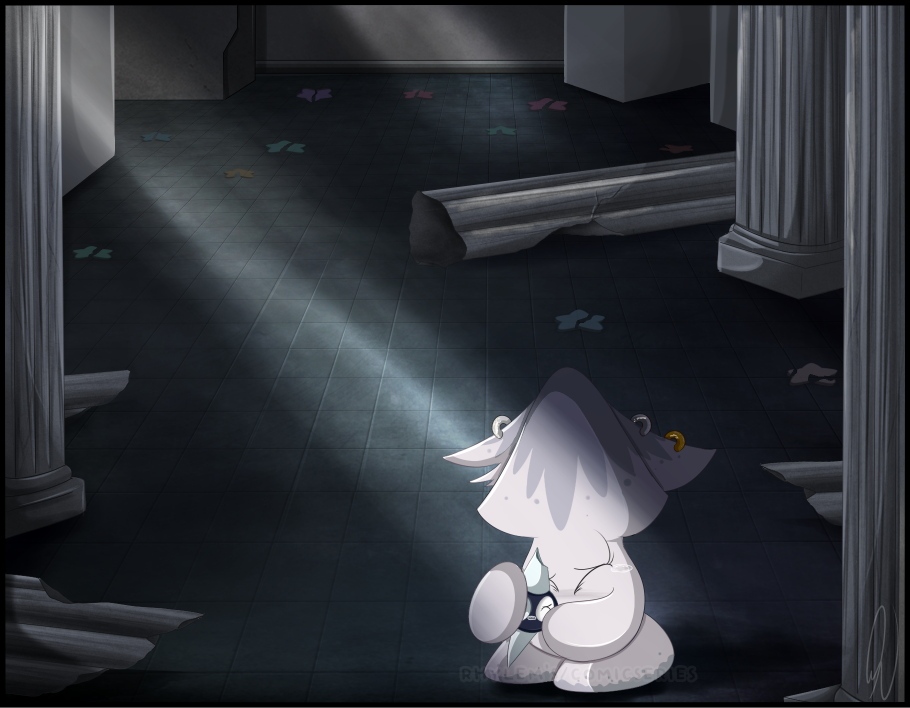 
But most of all, she was hurt.

And here she was, quietly sitting in a rather small, worn-down bar several towns away from hers. She tiredly lifted the glass to her lips and took a quick swig of her drink, ignoring the burning sensation as it slid down her throat, before slamming the empty glass on the table, and sliding it with the several others she finished.

She sighed, clutching her mantle in pain. Nothing was going right, everything was wrong. How was she ever going to get past this? Her home, her bother, her friends, and…him…...

A soft, quiet voice caused her eyes to snap forward. Though dazed, she could clearly make out a large, blue figure. Adorning a teal scarf, and bright, fluffy feathers, the Squid looked at her with slight bewilderment.

“Go ahead, but…there are other seats, y’know.” She spoke, calling the bartender for several more shots.

The figure politely nodded and sat next to her while maneuvering her wings and many tails to comfortably fit in the small booth. Once comfortable, she looked over at the bartender who placed several glasses on the table. The Squid slid one to her before downing another.

“So, what’s your story?” Habit of once being a bartender, she couldn’t help but ask. “I’ve never seen a creature like you before.”

The figure lifted one of her tails, and placed it on her hand. “I’m not from around here. I….I’m lost.” She spoke.

“Tch- you and I both.” She mumbled and tiredly leaned her head on the table and continued to listen to her.

“I…have lost someone very special to me.” The mysterious figure spoke. “Someone I should have protected more….”

“Haven’t we all.” The Squid nodded and pushed the drink closer to the figure. “Here, this will help .”

“Thank you for the offer, but I do not drink.” She gently slid the glass back to her.

“Really now?” She took the glass and idly sipped it. “Then why are you here? You do realize this is a bar.”

“Yes, I’m quite aware.” She spoke, slightly flicking one of her tails. “I came here because I am looking for someone. My friend once told me she owned a bar.”

“I see….” She spoke, though not as interested since the pain of leaving hers was starting to surface.

“I believe I found someone that once belonged to the couple, so I’ve been traveling in hopes to find them.”

“Hm…” The Squid hummed as she strayed farther away from the conversation they were having. Truthfully, she doesn’t see why this figure was talking to her, and not the owner.

“But then....I began to wonder. Maybe they were lost as well? Still broken, and torn apart from the past, and unable to move on.” She spoke, lifting the chin of the other so she can see her. “It’s been extremely hard since the incident, hasn’t it, Miss Alba?”

“E-excuse me?” She pushed back, and whacked her tails away when she said that. How? How did she know her name? And the incident? She knew it as well?

“W-who are you?” Alba spoke with her guard now raised. “H-how do you know me?”

“Because you once knew someone I did.” Again, she placed a tail on her hand and gave a small frown. “You once knew my dear Bate.”

“B-Bate? You knew who Bate was?” She couldn’t believe it. She never recalled him talking about this weird, bird like creature before. “What else do you know? Is he okay? N-no, wait. He attacked everyone, did you see what he did? What happened, why did he-"

Before she could finish, a tail was held up to hush her. Alba didn’t speak a word, and watched as the figure used her tail to motion the young squid out of the bar. When they reached the exit,  Alba clutched on the the side of her wing since she was extremely lightheaded from drinking so much. Was this really happening? Was she actually talking to someone who knew Bate? Maybe she wasn't. Maybe this was all just a horrible dream and she's really at the bar passed out again.....

Alba looked at the figure, and began to softly whisper.  “P-please…I have to know. A-are they okay?”

The figure continued to walk without a word until they hit a fork in road. One leading back to Alba’s new home, and one to the outskirts of West Nova. Both stood in silence until the winged figure finally spoke.

“If you would like, I will take you back home and you can forget we ever had this conversation.” She offered, “But, if you would like to have every question you asked answered....you must leave your old life behind and come with me.”

“Hm?” Alba looked up and noticed she pointed in the other direction. “The outskirts?”

“There’s a place I can take you to. It’s been long abandoned for centuries, but you will be safe, I promise."

Alba watched as she extended her tail for her to grab. Patiently  waiting, Alba took a few steps back and shook her head.

"I don't even know you, and you expect me to trust you just like that?"

"I understand you must be afraid, but....did you not once trust my dear Bate and his friend when they first arrived in Kalmari?" She asked.

"How did you....." She began to speak, but stopped since she probably wouldn't answer it for her. Would following her really be the best choice? She knew what happened that day. She knew everything she ever wanted to know.....
Elliot, Bate, Gordon, Ellie.....

She knew she had to take this chance.

Hesitantly, she reached over and grabbed her tail.

"Okay, I will go with you." She spoke as the other gave a silent nod. Even though she was wearing a scarf, she could faintly tell she smiling from her answer. This caused her to slightly drop her guard, and smile back.

"Please," She kneeled down so the Squid would be able to get on her back. "I will take you to your new home."

"Yes," She spoke as she started to flap her wings. "Someone you know is greatly expecting your arrival. I have to admit, I'm glad you accepted my offer. It would've been quite awkward to tell him the terrible news if you refused.

The Squid could only huff as she tightly clutched on to her. "Let me guess, if I ask who this someone is, you're just going to tell me to wait."

"I'm sure a few moments longer wouldn't hurt, will it?" She chuckled from her cheeky response. "Besides, I'm typically not one to spoil a chapter."
​​​​​​Artist Comment:

Cut to the illustration above!

Mother and son are reunited once more. Unfortunately, both will not be able to leave for a very long time. It was only until TBaTK did Atka tell the pair they are able to go back to Kalmari.  So, if you were wondering how Alba and Jr were in the Guardian Temple during "Guardian of The Stars" and "The Bird and The Knight" well, say no more! I have answered it for you~

Alba took the loss of his brother extremely hard. She left with the other Squids when Bate attacked everyone during the demon frog incident. She tried to move on once she found a new town to live in, but the guilt of Elliot's death, and leaving Gordon behind consumed her and, like Bate, she began to drink heavily to cope. She ended up inflicting pain on herself as well, which is why one of her fins is damaged. She was broken and damaged much like how Bate was.

Eventually, Atka was able to track her down and offered the Squid to leave her old life behind and start a new one. After learning how much Atka knew about Bate and the incident, she decided to take her offer as she had really nothing else to lose. When they entered the temple, Atka lead her to a certain part where Jr. was patiently waiting. Once Alba saw her son, everything immediately changed. Having Jr. back in her life helped her greatly. With Atka's help, she began to recover and move on from the loss of her brother. She is also fiercely loyal to Atka for not only saving her son, but saving her as well.

​
Regarding the Warp Stars:

This temple was long abandoned many, many years ago, and it wasn't until Atka's arrival did it finally started to regain its purpose.  Putting it lightly, the temple was a huge mess. What stood out the most, however, is a graveyard of damaged Warp Stars littering each room. Atka, being a dedicated follower to Lord Kelderon, and the history of Warp Stars, she tried her absolute hardest to tediously match each and every one of them.  This was no easy feat because not only were their a plethora of stars, but Atka was struggling with even touching such a thing. This is not just a "Shard Piece" it was a life. It belonged to someone, it WAS someone. It had its chapter, its world, its journey....and now it's here, abandoned and forgotten.

This is extremely hard for Atka, and she struggled greatly with each piece she found. Eventually, she managed to sort them, and left them on the floor below until she could figure out something to properly honor them. With the help of Jr and Alba, they did create a resting spot for them, and it was shown in one of the pages in the comic. ​
Species © Nintendo/ HAL Laboratory
Interpreted characters created from said species © Rhylem