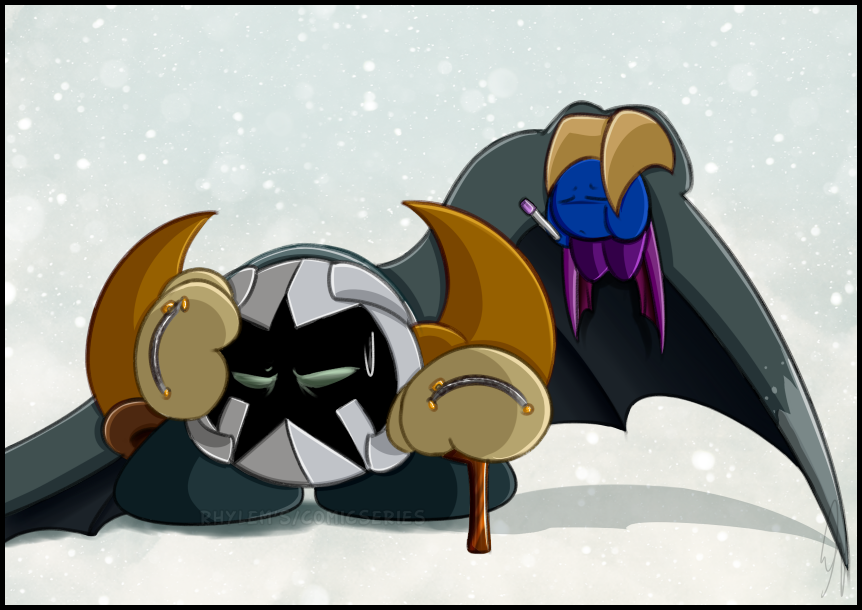 ​
​Meta swallowed a lump in his throat as his quietly made his way towards the sleeping figure. Every step he took made the young warrior halt for a few seconds; terrified that he'd wake up from it. His mind was racing, petrified as mere seconds turned to minutes. What seemed like an eternity, his small steps were paying off as he was getting closer, and closer, until....

Meta gave a small sigh of relief as he came face to face with his mentor. The old flight instructor was in a deep sleep, from what Meta could tell due to his loud snoring. He quietly pulled out the thick black marker and gripped the top to uncap it. Meta closed his eyes in fright as it made a rather loud popping sound when he pulled it off. Again, he waited a bit to see if his teacher was still asleep before making his move.

“Okay, Meta, you got this…” He said as he inched closer to the shimmering polished mask Bate was wearing.

Meta’s blood ran cold. He quickly backed up when Bate’s brightly orange eyes made contact with his. His teacher was up....? All this time? He then gave a small yelp as Bate’s claws hoisted him up to prevent him from running.

"Now, I expect this type of foolish behavior from Ramset, or even Falspar....but you, Gumball?"

"T-teacher...." Meta tried to explain himself but he was cut off.

“I know for a fact I didn’t raise an idiot,” Bate said as he started questioning his parenting skills. “Sweet Nova, where did I go wrong? Was it because I wasn't strict enough? Was it because I let you hang out with Ramset too much? What did I do that could've caused this?"

Meta, not having a choice, waited for his teacher to finish sulking about his 'questionable' raising abilities.