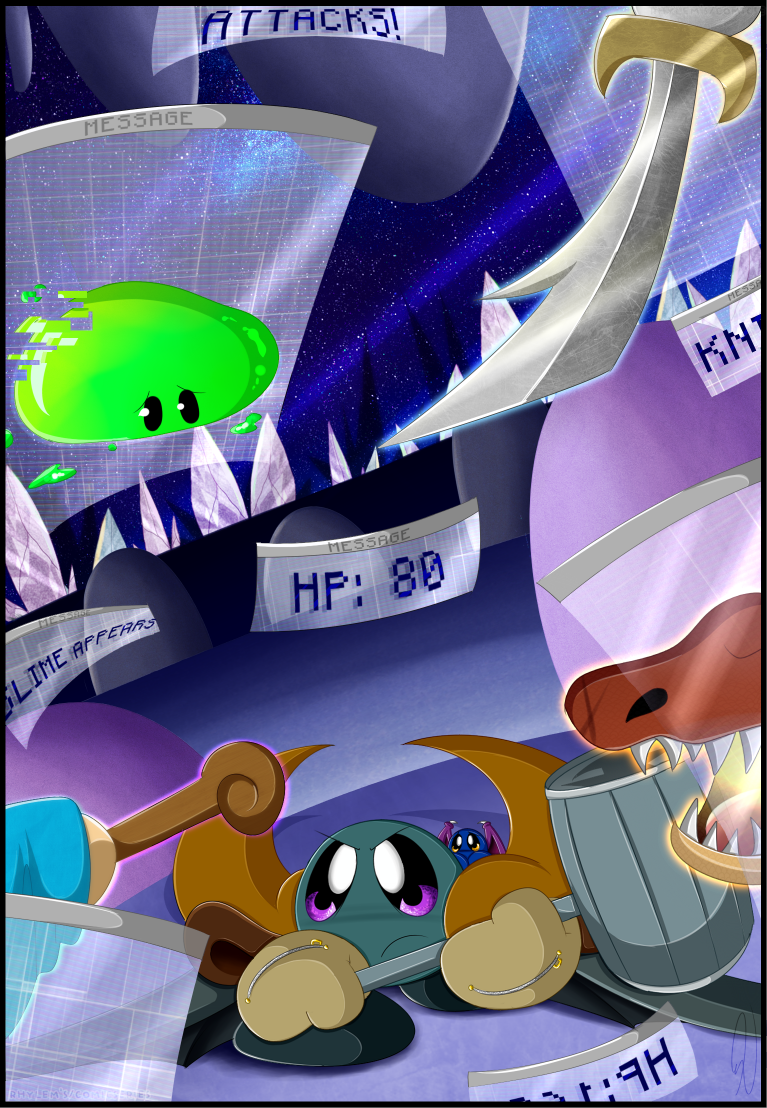 ​​​Vs. Computer Virus
Sir Bate / Meta
​
​
"Meta, wait!" Bate hastily called out and grabbed the child by the wings so he couldn't proceed any further.

"But Teacher, I can see the door on the other side!" Meta tried running again, but fell back when Bate tugged him.

"Do you remember the last time were were in a room like this? We were attacked and almost got crushed by a giant whale!!!" He scolded, putting the child back in the folds of his wings. "Now stick by my side and do not run off.

"Yes, Teacher...." He softly mumbled and kept himself hidden as they walked across the massive empty hall.

Bate walked at a snails pace as he observed everything in the room. So far, nothing in particular caught his attention. No sign of life, no sign of any movement....nothing.

'Maybe this isn't going to be another fiasco like before.'  Bate thought, happily smiling as he took a few more steps towards the door.

"Or maybe not....." Bate hung his shoulders as he armed himself with his hammer. He quickly looked around the room to spot his new opponent, but.....

"Teacher, who's talking to us, I can't see anything." Meta spoke as he tried to find the one who greeted them.

"I don't know, Gumball, but let's be on guard. The last thing we need is a surprise attack."

"But they don't sound scary." Meta pointed out. "And they even greeted us! What if they wanna be friends?"

"Meta, when has anyone in this area wanted to be friends with us? They're just baiting, and I'm not at full strength to be fighting anyone right now." He said, continuing to the exit. Meta gave a silent nod and followed. It wasn't until something bright caught Meta's attention did the little warrior call out and point above Bate's head.

"Teacher, look! There's something floating above you!!!"

Bate quickly dashed out of the way to dodge whatever Meta warned him about. When nothing hit, Bate carefully looked above and saw......a flying....blue box?

"Message?" Bate murmured and stepped away when several more boxes came to view. Bate noticed one was hovering next to him, and another above Meta.

"I'm not sure." He said, turning to his. "And why is mine so low?" He frowned when his only read a measly 10HP. Both watched at a few more boxes came to view, and Bate gripped his hammer when an image on one of them started to appear. A small green slime like creature appeared followed by several texts scrolling across another box above it.

Meta's request caused Bate to halt his attack. The creature eventually jumped back on screen, and another row of text followed soon after.


=Bate and Meta did not attack=


Bate gasped in surprise as a small star shot towards Meta. Bate ran to his side and blocked it.

"WELL,  HE'LL  DIE,  OF  COURSE."  Another voice said. The pair watched as several other creatures appeared on the screens scattered across the area.


=Bate and Meta avoid the attack!=


"G-gumball, I think this is going to be much harder than the last one...." He said, weary that his health is only a few points shy from death. Even so, he can't give up now. He made a promise to find a way out, and nothing was going to stop him from achieving that goal. Just then several boxes popped up, and all the characters hit the floor.


=Bate and Meta's Turn to attack!=


Gripping his hammer, Bate rushed towards them without hesitation.

"I won't let you stop me!!!" He shouted, "Take all my HP, take all our items, but nothing will stop me from getting past you!!!"

Here's another illustration of Bate and Meta in the Great Cave Offensive! This time, they made it through the Crystal Area and face the keepers of it. Since they're from a time where computers / games don't exist, they're not really sure what exactly they're battling. Will they be able to fight off Computer Virus and enter the next land?