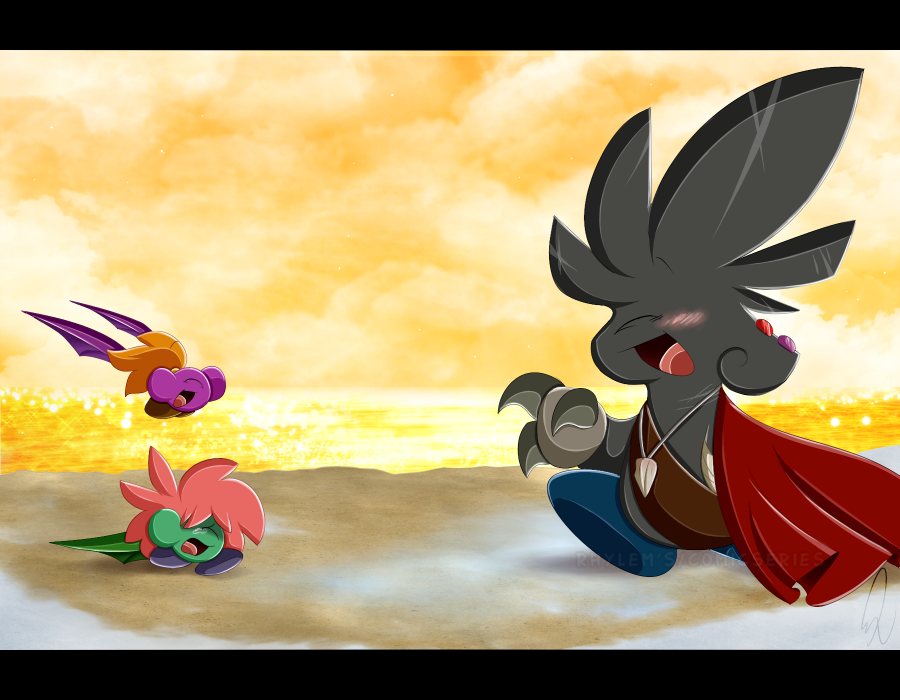 ​
Spending time with friends and family while having fun without a care in the world tends to make time pass by in the blink of an eye. Hours seem like mere minutes, and months may only feel like a few days. For Falspar and Dragato, that seems to be the case this year. Their summer days felt much too short. Even the fall season flew by before either of them had time to prepare for the winter season.

The pair absolutely loved everything about the cold season. Loved spending countless hours playing in the snow, starting snowball fights with their friends, building snow forts and making snow puffs. But the one thing they enjoy most of all is spending Squidmas with their friend and mentors. Normally they would be thrilled to spend the next 2 weeks away from training, and spend it playing with their new gifts.

Recently, however, none of them seem to be in a celebratory mood. In fact, it’s almost if the pair didn't want winter to come this year. Ramset knows exactly the reason behind it, and it comes in the form of a certain Bukiset.

The one they've grown quite fond of over the months. The one they wanted to spend the winter break with. The one who unfortunately hibernates for several long months and won't be around until spring.

At first they refused to believe it, but during the final days of fall, they noticed a huge shift in his behavior. He doesn't seem energetic like he once was- he's become too sluggish to teach or play. He rarely leaves his cavern and spends most of his time resting.

Falspar hates it. He didn't want to spend Squismas without him. It felt wrong. While everyone is having fun and celebrating, he's left all alone. Ramset reassures his students, and tells them Gravel is going to be just fine.....but a child's mindset is very hard to convince. He's been hearing Falspar whine and plead for them to visit every day once he found out. It's been quite challenging calming his student down at times, but Ramset knows Gravel better than anyone. He knows his partner prefers to spend the last few weeks alone to reserve his energy before he says his goodbyes. If only his students knew that....

When the final day of fall started to Dwindle away, and it was finally time to say farewell, the three patiently waited near the entrance of the canyon for him. The pair anxiously waited while standing besides Ramset who calmly placed a hand on their back to settle their nerves. When a part of his frill appeared over the horizon, Ramset couldn't help but give a small chuckle from how fast those two bolted.

Their calls echoed into the chilled air as they ran to the elder as if their life depended on it. Gravel smiled at the two now clutching on to him, and reached down to pick them up.

"Ramset told me you've been quite sad over the past few days." He said when he noticed their frowns, and tears in their eyes. "I won't be gone forever. I'll be back once winter ends."

"It won't be the same without you...." Dragato sniffled, hugging him tighter.

"Are you sure you can't stay up? Not even for one day?" Falspar asked.

"I'm sure Ramset already told you how difficult it is to get me up. And if even if you could, I would appreciate if you parasites leave me be until the cold season passes. I don’t particularly prefer being disturbed, so don't worry about me and enjoy the holidays with everyone else. Alright?”

“Good.” He spoke as he hugged them one last time before walking to Ramset.”Then it’s time for me to leave now. Do me a favor and keep an eye on Ramset until I get back.” He said, handing them off to the Sasuke as quickly as possible since he started to feel the weight of exhaustion fall upon him. He and Ramset already said their goodbyes yesterday, so he gave his comrade a brief nuzzle before heading back to the canyons.

He informed Ramset the farewell had to be fast, but by the reaction of the two crying out once he started to back away, Gravel had a feeling he forgot to specify how quick it was going to be. As much as he wanted to stay, the need to slumber became far too great. So despite their cries, he continued to trek back to his cavern to rest for the next several months. He gave one final wave to the trio before marching on.

Rasmet kept a firm hold on the pair, and waited until Gravel could no longer be seen before he headed back to Kalmari Forest. The walk back is quiet except for the occasional sniffle from them. Once they reached their home, Ramset set the pair in the main room before taking a seat across from them.

"So! How about we eat out tonight!" He smiled, trying to think of a way to cheer them up. "Anywhere you want, how about it?"

"Hm, no thanks..." Falspar mumbled, falling over to rest his head on one of the pillows.

"That goodbye lasted less than 5 minutes. Why couldn't we visit earlier in the morning?" Dragato huffed.

"Dragato, I already told you it takes a lot of energy for him during the cold season. If you stayed all morning, he'd use up too much. You wouldn't want him to fall ill, do you."

"Falspar, Dragato-" Ramset got up from his seat and kneeled besides the two. "I know you're sad, but Gravel wouldn't want you to feel this way during the holidays. I know it doesn't seem fair, but he has to do this. When he wakes up, we’ll all visit him and have our own little celebration. How does that sound?"

His words did little to no convincing, and the Sasuke stood up and weakly rubbed the back of his head. Stubborn students, he has. Out of options, he headed to a decorated tree a few feet away to grab something, and handed them both a wrapped gift. The pair inspected the present, and looked up at Ramset when he began to speak.

"He told me to give these to you if you didn't cheer up." He said, sitting back down to watch them open it. “I think he had a feeling you two would have a hard time about it."

The pair looked at one another for a brief moment before tearing open the gift.

"Hm?" They each held up a leather-bound book. Falspar was a pale green color, while Dragato was plum, and the front of each book had an engraved star in the center, along with their name. Dragato flipped through a few of the pages and noticed all the pages were blank.

“Yup~!” He nodded. “Since Grav won’t be around for the next several months, you two can write in these each day, and read it to him once he wakes up. I know he’ll enjoy listening to everything he’s missed.”

Ramset then placed another present in-between them. It was much larger than the previous one, almost the size of Ramset himself. “And this is from me. Both of you will have to share, but I think it goes perfectly with Grav’s gift.

The two quickly ripped it open, and gasped when they saw what it was. A large basket filled to the brim with art supplies. Markers, crayons, jelly pens, glitter, paint- anything and everything one can think of. Dragato had a feeling his mentor cleaned out the whole art shop for them.

“Use these to help decorate the pages.” He smiled. “Leave nothing out, and make sure each page is memorable.”

“Oh, wow!!!” Falspar grabbed a large pack of crayons as he made his way to the floor to start scribbling on the first page. “I’m gonna make the best pages ever!!! Teacher Gravel will love it!!!”

“He’ll love mine even more!!!” Dragato took a box of markers and some glitter glue as he joined Falspar as well.

The once quiet house was now filled with laughter. Ramset watched as they rummaged though all the art supplies to decorate the page with. Both of them sharing ideas and thoughts of what to draw tomorrow, and the next day, and the day after that! Ramset couldn’t help but beam from their boisterous, lively behavior.

‘Ya better rest up, Grav.’ Ramset thought to himself as he continued to watch the pair. ‘These two are gonna stick to you like glue once you wake up.’

In the lone cavern, far away from Kalmari forest, a Bukiset rests. A smile on his face of the thought of seeing everyone again, and listening to the stories his two students have to share.
-The End-
​​​​​​Artist Comment:

Gravel and Ramset come up with an idea to help their two students overcome the absence of Gravel for the next several months while he hibernates. >v< Once Gravel wakes, it takes a few days for him to recover, so he'll have plenty of time to listen to Drago and Fally's stories! ^o^

And yes, for those who didn't know- Gravel hibernates! It's only been mentioned a few times, notable illustrations here-
Species © Nintendo/ HAL Laboratory
Interpreted characters created from said species © Rhylem