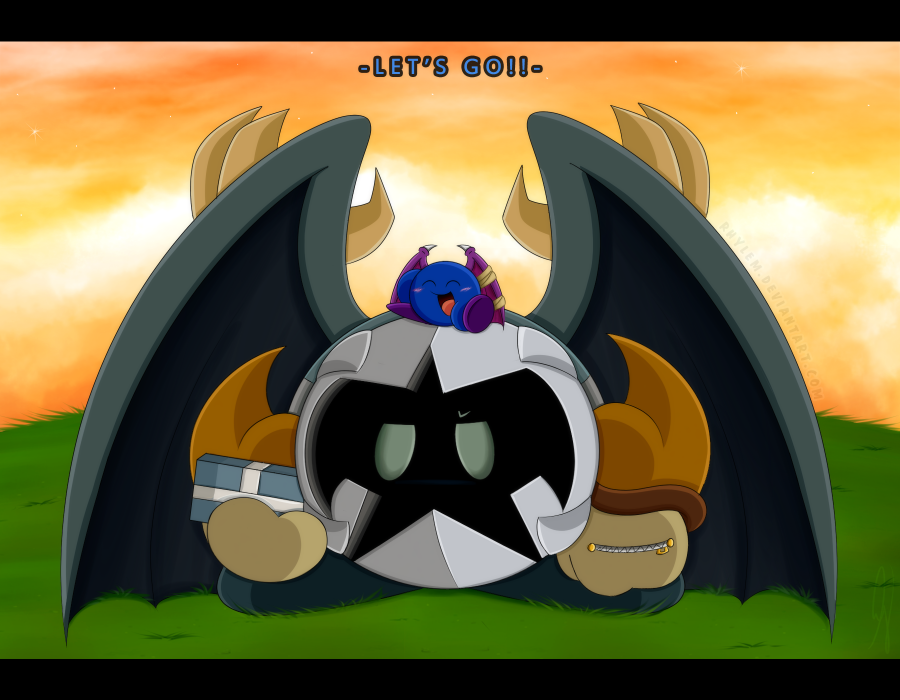 ​
Meta's eyes sparkled when he saw the brightly colored gift in his teachers hand.

"Who's the gift for, Teacher?!!" His voice, filled with excitement.

Bate looked at him and raised a brow. "It's not for you, if that's what you're thinking." He walked out of the small gift shop and headed back to his home; the tiny Puffball quickly following him from behind.

Meta stopped to ponder who else his teacher could've known. Kalmari Town is quite small, and there wasn't many who really talked to him.

"It's for someone who lives in South Nova." The elder answered. He glanced at the gift and sheepishly rubbed the back of his head. "Her, ummm....birthday is tomorrow, and I need to pay a visit to deliver it."

"Yes, South Nova. And I need to get packing so I can-"

The little Puffball started shaking one of his teachers wings in anticipation.  Bate regained his balance from the sudden shaking and pushed Meta away from him.

"But whhhhhhhyyyy?!!" He whined. "Nonsurat went with you to Central Crux, why can't I go somewhere?"

Bate let out an irritated groan. "That's because Nonsurat had to have surgery!" He lightly slapped Meta's head with one of his wings. "Do you honestly think I would take any one of my students to Central Crux for fun?!!?"

Bate's eyes softened when he heard what Meta told him.

Bate couldn't blame Meta for wanting to get away from Kalmari. He could relate seeing as he refused to go back to East Nova after the incident with his mother and younger brother. He knew it was hard being around a place where someone you cared for passed away. Now knowing Meta's reason for wanting to go, Bate had a change of heart. Unfortunately, there was a slight problem.  He looked at his student and saw that his wing was still wrapped up from his class earlier that month. Bate fully knows that it won't heal for another few days, and that he would never allow any student of his to fly in such a state. Bate had no other choice.....

The elder bent down and patted the little puff on the head. "I'm sorry, but you can't go."

Meta turned away from his teacher, completely crushed what he just heard. A minute passed before he finally responded. "...O-okay."

Bate got up and walked a few feet away from the sulking Puffball. "Ah, what I meant to say was...." He coughed a few times to clear his throat. "You can't go.....unless you're able to fly."

He pointed to Meta's wings. "It seems like you're still injured from my class, so......"


"You'll have to ride on my back if you want to come with me to South Nova."

Meta didn't listen, however. He was too excited about going to South Nova to care about his teacher's empty threats.
​
-END-
﻿﻿Artist Comment:﻿﻿

This story is so old!!! It's almost been a year since I wrote it. o^o

​Here's a little story before we dive right into the next page! New Characters will be introduced, lots of fighting and many secrets and weaknesses will be revealed. x) I hope you do enjoy the next installment of the Meta series. <33
​
Species © Nintendo/ HAL Laboratory
Interpreted characters created from said species © Rhylem
Story © Rhylem