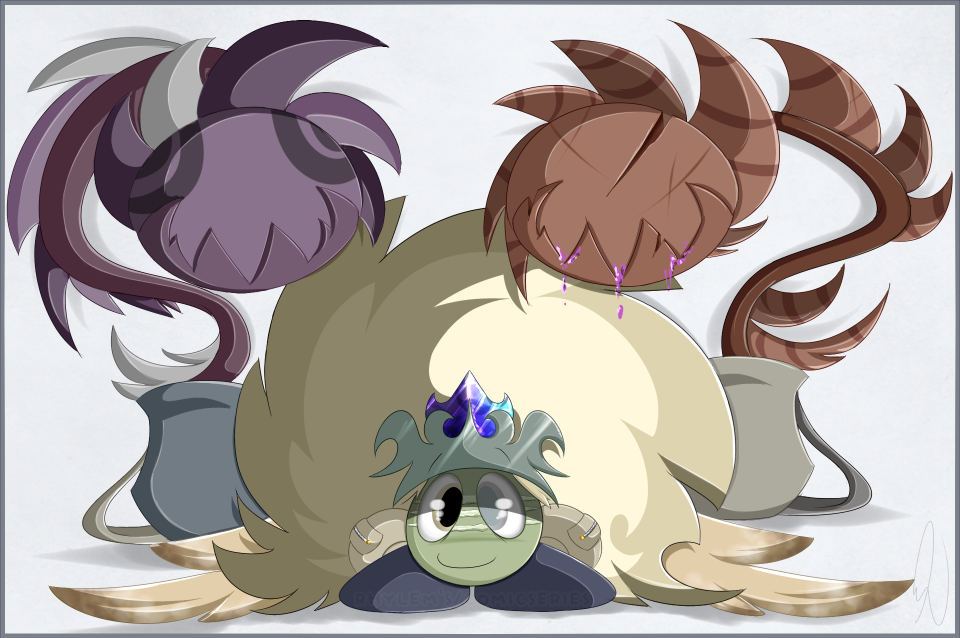 A very dangerous type of Pacto Hybrid, only those who are skilled enough to form a powerful bond with them can tame this deadly beast.

This is where Atticus comes in. Meets his two Pactos- Hitan and Beatrice. Petta introduced young Atticus to a normal Pacto Snapper and learned there was a stronger hybrid like plant deeper within the grove of Pactos. Seeing as Atticus was a hybrid himself, he ventured further in with much excitement, and found what he believed was the hybrid his mother described. Although it showed much hostility towards the Leo, Atticus miraculously befriended several of the smaller ones of its group. Eventually, the larger one came to respect the little Leo as it posed to threat to its family.

Like Galaxy Bell, Atticus would always visit his new friends. As the years passed by and both Hybrids grew stronger and more powerful, their friendship became inseparable. Atticus would care for many of the Pactos he’s grown to love, but unfortunately a wild forest fire caused by a Demon Beast broke loose in the grove. He watched in horror as many of the Pactos started to die and knowing his friends were getting close to their demise, Atticus ran towards them and began to dig. Using all his energy and strength, he only managed to rescue 2 of the younger Pactos, and carried them out of the grove to safer territories.

When Petta and Arthur caught wind of a Leo passed out in the main plaza with two hostile plants protecting him, both headed towards the area as quickly as possible. Petta was able to coax the fire scarred plants, while Arthur took his son to the hospital. Several weeks passed, and Atticus and the two plants he saved were recovering well. Petta managed to plant the Pacto Hybrids in time, and Atticus was treated for minor burns due to the fire.

Atticus took the death of the ones he couldn’t save quite hard, and Petta tried her best to help him get through such a loss. She told her son the two he saved will look to him for protection since they lost their family. Petta also informed him that while Pactos are mainly earthbound, Hybrids are a bit different. Motioning her son to go outside, the Leo was surprised when he saw two potted plants with straps on them. Petta told him hybrids are able to travel great distances without the need of a bed or grove. He will be able to take them anywhere, and they will protect him as he once did to them.

Atticus, finally reunited with the plants he saved, promises he’ll do everything to care and protect them until he finds a suitable area for them to live. That being said, Hitan and Beatrice are grossly protective of Atticus. He takes turns with each one, and carries them when he’s out gardening. Anyone who gets too close to Atticus may receive a few warning snaps or venomous hisses. Over the months, Atticus has developed a lot of strength from carrying his two Pactos everywhere. Atticus knows their time spent together will be short as he’ll eventually find a place for them, but he’s enjoying their company and will cherish the time he spent with them in Kalmari.


Atticus is like a papa to themmmmm! =,D I also decided I wanted to have one female, so I changed the name~ Hitan is the purple male, and Beatrice is the red, extremely aggressive female. Both are very venomous, and will attack if provoked...or if their daddy is in danger. >v<; Atticus has a habit of befriending lots of dangerous plants. XDD

Eventually, Atticus does find a nice spot for the Pactos. He visits from time to time and makes sure they're well protected from any harm. u////u
Species © Nintendo/ HAL Laboratory
Interpreted characters created from said species © Rhylem