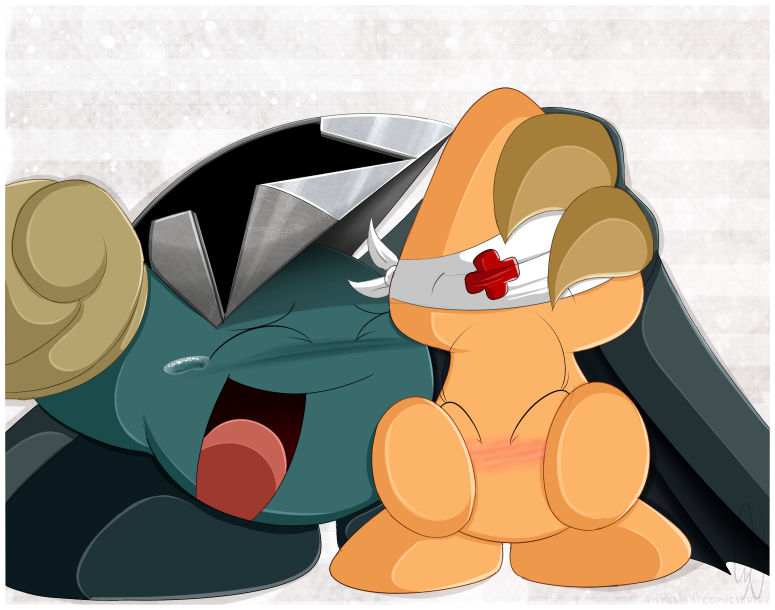 The Story of Family
Bate / Ellie

After the death of his family in East Nova, Bate didn’t think anything would be as devastating as that horrific event. It’s been difficult getting over the loss of his family, but through the years of arriving and living in Kalmari Town, he can agree that his life has been progressively getting better. More than better, he would say. He’s learned to slowly put the past aside and move on with his life to start a family of his own. His wife, a Squishy named Ellie, now share their life together as a happily married couple.

Bate, through the eyes of his friends, is considered a brute wall of strength after gaining his wife. He was seen as someone who could withstand anything anyone could dish out, especially if it was to protect Ellie. No one thought anything could ever break him, but the unfortunate news that he and Ellie weren’t able to become parents was something he hadn’t prepared for. He never thought something as worse as what he had to endure in East Nova would surface again. The news he had just received absolutely crushed him. The strong willed Star Warrior fell to the floor and cried. He cried with his wife in his arms and repeatedly apologized.


“A-are you sure, Bate?” Gordon, who was just as shocked and disappointed as the couple, asked. “Maybe you two could try again, or-“

The Gordo stopped talking. He figured mentioning anything about having a family was too much for him at this time. He gave a small nod and dropped the idea.

“Is…Ellie okay?” He finally spoke up again. “I haven’t seen her around. We’re all starting to get worried about the two of you.”

“I…I’m sorry,” Came his emotionless reply. “It seems like all I ever do is disappoint….."

“Don’t say that.” Gordon raised his voice. “This isn’t your fault, and you shouldn’t be blaming yourself over this. Bate, Sweet Nova, do you even hear what you’re saying?”

“One thing…..” He softly whispered, “She wanted one thing, and I was unable to give it to her. I made her cry, Gordon. I’m her husband! I’m supposed to protect her, not make her cry!"

“Bate…” Gordon frowned at the broken warrior in front of him. “I know it seems bad, but things will get better. You still have Ellie….and she still has you."

“But she wants kids!” He snapped and slammed his hands on the table. “She wants a family, Gordon! She wants to be a mother! And…and…..”

Bate broke down and covered his face when he started crying. “….I wanted to be a father.”

Gordon’s heart skipped a beat when he heard that and he instantly went over to hug him. “I know….” He quietly spoke as tears fell from his face as well, “I know…”


Bate entered the house later in the afternoon after being comforted by Gordon. He saw Ellie sitting in the living room, and their eyes quickly locked before Bate looked down in shame. “E-Ellie…how, ummm…I mean….I didn’t except you to be here.”

“I took the day off…” She quietly replied, avoiding eye contact as well after he did.

He gave a small nod and headed to their room without saying a word. Bate could sense the strain in their relationship after hearing the news a few days back. It’s gotten so bad, he wasn’t even able to look her in the eyes without turning away. He figured she was ashamed of him after the news, so he’s been avoiding her ever since. It’s been tearing his heart apart from their lack of communication, but he didn’t want to hurt her more than he had already.

The warrior, not feeling up to par to do anything for the rest of the day, crawled in bed and wrapped himself with the blanket before crying himself to sleep.


“He hates me.” She cried in the Gordo’s arms. “He hates me, and he doesn’t want to be with me anymore.”

Gordon and Alba gasped in shock.

“N-no, but…” Ellie wiped her eyes with the tissues Gordon handed her and continued when she was ready. “He acts different when I’m around. He doesn’t talk anymore, and he can't even look at me when our eyes meet. Even when I enter the bedroom he leaves and sleeps in the living room. It’s like….I don’t even know him anymore.”

“I think he’s just confused, Ellie.” Gordon spoke. “Bate’s been so worked up about this whole thing, he doesn’t know how to properly react to it.”

“He did take the news quite hard.” Alba added, “I know what he’s doing isn’t the best way to handle it but….he still loves you.”

Gordon summoned one of his hands and placed it on her shoulder. “Ellie…” He looked down at the heartbroken Squishy, “Bate loves you with all his heart, trust me. I talked to him yesterday and, well….he told me how much you wanted to be a mother.”

He saw Ellie give a small, tearful nod, so he continued. “Bate feels absolutely horrible and blames himself for not being able to give you what you wanted. He started to cry when I was talking to him, and he blames himself for this whole ordeal."

“H-he what?” Ellie asked, wiping the last of her tears. “Bate really said that?”

“I’m sure seeing you cry caused Bate to put the blame on himself.” Alba suggested, “You know how badly he tends to react when something troubles or upsets you."

“Yup, I can vouch for that,” Gordon nodded. “He ended up having a compete meltdown. After all these years knowing him, I’ve never seen him act so distraught before.”

“You wanna know what I think?” Alba stood up and grabbed Ellie’s hand to lead her out of her house. “I think it’s time you two stopped avoiding one another and talked. Both of you put the blame on yourselves, but none of you are to blame for this. You’re hurting, Bate’s hurting; it’s time for you to seek comfort in each others arms, not ours….”

Now knowing why Bate was behaving the way he was, Ellie gave a nod at the couple and dashed out of their house. Once she reached their home, she burst through the doors and ran into their room where she saw Bate sulking in bed.

The Puffball sightly jumped from her shouting and gave her a concerned look. “W-what, what’s wrong?!?”

She ran straight to him and clutched onto the Puff. “You, you idiot. I just talked to Gordon. How could you think for a second that this is your fault?”

“E-Ellie…” He stuttered, not knowing what to say

“This isn’t your fault, none of this is.” She continued, “ Bate, please don’t do this. I love you greatly, and I don’t want to see us drifting apart because of it.”

“I don’t either, but…” His voice started to get softer, “I know how much you wanted to have a family.”

“I know….” She slightly frowned, feeling guilty when he said that.  “And I’m sorry if my behavior regarding this led you to blame yourself, but please believe me when I say you did nothing wrong."

“But I made you cry…” He gingerly returned the hug and held her as well, “I never wanted to be the one to end up hurting you.”

“Bate, we’re both hurting. I’m not the only one crying about this.” She clutched his arms, “We both wanted to be parents."

Ellie could sense her husband starting to tense up, “It’s okay, Bate.” She soothed. "We’re going to be okay…."

“And I do too.” She hugged and cried with her husband.


“You’ve been acting quite strange the past few days,” Bate looked up from his breakfast and started to interrogate the Squishy across from him, “What’s up? Did something happen at work or something?"

“No, nothing at work…but there is something.” She let out a small giggle which confused Bate even more.

“Really?” He took another bite of his food and thought for a bit. “Huh, wait a minute….are your parents gonna be visiting….or worse, are they staying over for the weekend?!!!” He started to panic.

Ellie simply shook her head and got up to lead him into the living room. Bate nervously sat and waited for her response.

“Bate, I have something important to tell you.” She smiled and sat next to him, “Something really important.”

“More important than my breakfast…?” He said, glancing back at the table.

“Much more!” She chuckled and leaned up against him to whisper it in his ear. “Bate….you’re going to be a father."

Not sure if he heard it correctly, he let out a small laugh and looked at Ellie. “I’m sorry, I don’t think I heard you correctly. It, ah…..kinda sounded like you said I was going to be a, ummm…father?”

It took a bit for her words to sink in but when it finally did, the warrior stood up and yelled to the top of his lungs in happiness. "I can't believe it!!! Ellie, we're gonna be parents!!!! Hurry, we gotta tell Gordon and Alba...and......and...everyone in Kalmari!!!"

"Let's just start with our little group of friends first, alright dear?" Softly giggling to herself from his boisterous reaction, Bate eventually agreed and pulled her in a tight embrace before leading her out of the house to celebrate.

An old piece from 2015 that I felt like finishing today! I'm so happy I get to post the one-shot for it! =,D