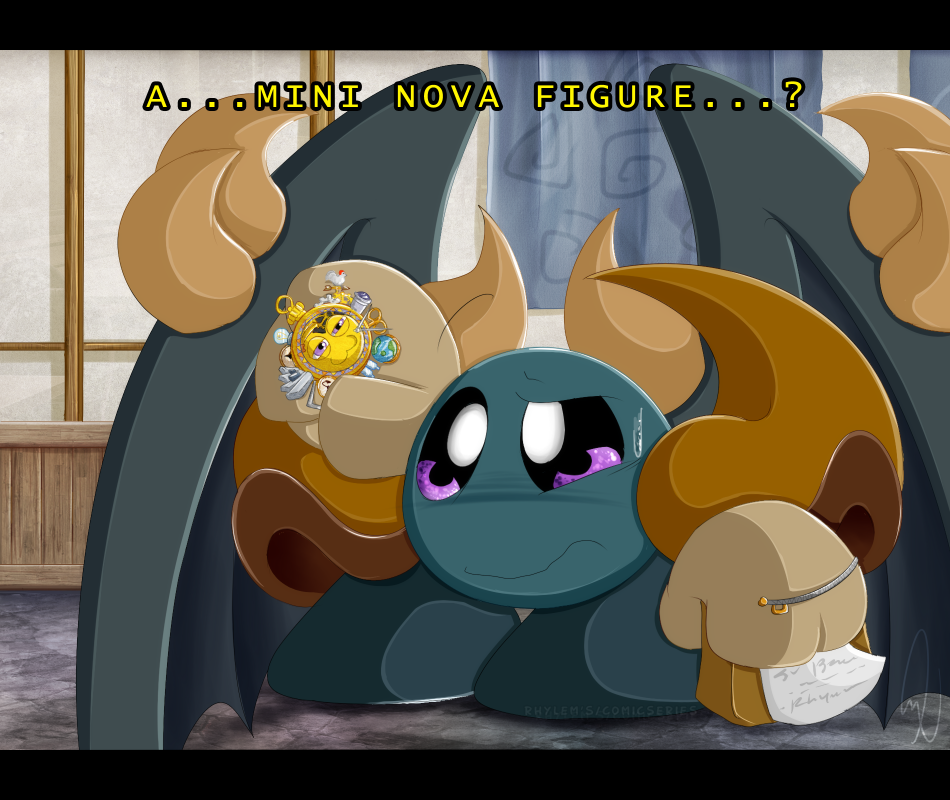 "Gumball, I'm going to the store, do you need me to pick anything up?" Bate pauses for a moment before continuing… "Anything that's not candy?"

One of the doors in the hallway fling open, and Meta dashes towards the elder with a single coin in his hand.

“Teacher, teacher!!! There’s a new capsule machine outside of the toy store, it has these little prizes inside of them!! Could you please get me one? Dragato and Falspar got a whole bunch, and I want one too!

“Capsule machine?” Bate repeats. It seems like every kid in Kalmari is getting hooked on this new fad. Apparently, Meta is no different.  “How do you know what toy you’re going to get? Are they all the same toy?”

Meta shakes his head. “Nu-uh, there’s 10 to collect in total! Each one is random!”

“Wait, so if there’s 10 to collect, what happens if you get duplicates?” Bate isn’t so sure if Meta should waste his allowance on something that doesn’t guarantee the toy he wants.

“Teacherrrrr….” Meta whines when he feels like he’s going to start lecturing him. “It’s just 1 little coin. I’m not gonna spend my whole allowance on them. Promise! ”

“Hm…”  Bate isn’t convinced, but reached down the grab the coin. “Okay, Gumball. I’ll pick one up for you. Just one. ”

“Yaaaay! Thank you, teacher!!!” The little warrior cheers as Bate makes his way out of the house.

“A….NOVA Figure?” Bate speaks to himself as he holds up the toy to get a better look at it.

Indeed it is. Held between the tips of his fingers is a plastic mini figure of their deity, The Great and Powerful NOVA.

“Is this what our great god is reduced to?” The elder mumbles to himself. “ First Cereal, and now this?

He takes another minute to stare at the item in question before gently placing the toy back in its capsule. He gives another long sigh before making his way back home to present his student with said toy.
​
“How blasphemous”
​
-The End-
​​​​​​Artist Comment:

Quick, silly little idea I had for Bate. Capsule machines are fairly new in Kalmari Town, and Meta asks his mentor if he can get one for him!!! Little did Bate know it's a figure of The Great and Powerful NOVA! oAo

I actually have a whole line of mini NOVA figure concepts, and I'm hoping to post them within the next few months~!! Some of the designs I think are SUPER adorable~! ^o^ I hope you enjoy them once it's posted! NOVA isn't exactly the easiest character to draw, hahaha~! But I had fun with them!  >v<
Species © Nintendo/ HAL Laboratory
Interpreted characters created from said species © Rhylem