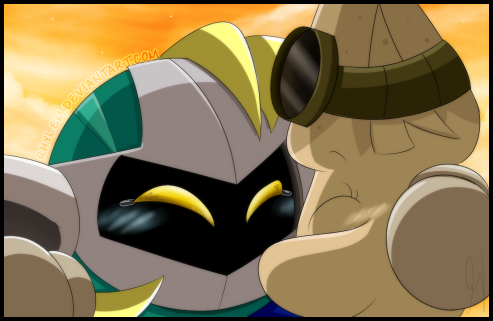 Marlo became a pilot for the GSA and ended up bumping into Nonsurat during the recruitment of new members. (She left Kalmari when she was 1,600 and joined a few months after. Nonsurat arrived a few years later.)

Of course, both were shocked when they saw each other. Marlo couldn't believe the shy, little Puffball became a strong, well-armed Star Warrior. As for Nonsurat...well, he couldn't really say anything because he started to cry when he realized it was really Marlo standing in front of him. Marlo started giggling at his same ol', childish response and embraced her childhood friend- glad he still had his sweet, caring personality.

Over the years, they've become quite close just like their Kalmari days. Nonsurat was very protective over her and would usually escort her if she were to travel to enemy territory. The need to constantly protect her throughout each grueling mission made Nonsurat realize that the reason he's doing such a thing on his own accord is because he deeply cares for her. He couldn't bear the thought of losing her, his childhood sweetheart, in the midst of war.

Unfortunately, Nonsurat's worse nightmare became a reality one day. He was informed that a lone plane was shot down during a delivery mission, and that Marlo was one of the pilots navigating it. Nonsurat was absolutely furious that he was not told beforehand that Marlo was one of the members who would be making the delivery. Arthur, who was currently in charge of sending out missions, tried to calm his frantic friend upon hearing the news. He refused to listen and stormed out of the room; collapsing in distraught shortly after in one of the hallways.

A few days passed after the tragic news, and the other 4 warriors were starting to get worried about Nonsurat. He's become very quiet and keeps to himself most of the time. Arthur suggested to leave him alone for the time being, seeing as there was nothing they could say or do to make him feel better. All four agreed and left Nonsurat to grieve alone.

A week passed and Nonsurat received some very unexpected news from Dragato. He informed Nonsurat about the aftermath of the crash, and that Marlo was one of the few who survived the impact. Dragato then told him that she was sent to a hospital in critical condition a few days back, and that the doctors were trying to get a hold of him. Nonsurat quickly left Dragato and made his way to the hospital, not caring about anything else but the well-being of his partner.

At the hospital, Nonsurat waited hours for news on her condition. Midnight struck when a doctor finally appeared to give him her diagnosis. He was informed that she would make make a full recovery, but it would take many months for her to completely heal from her injuries. Nonsurat took a leave of absence and stayed by her side until she would fully recover. During that time, Nonsurat eventually confessed his feelings to her. She gladly returned his affections and both became a loving couple by the end of her hospital stay.

Both Nonsurat and Marlo resigned from their duties of war and settled down in their childhood hometown of Kalmari.
​​​​​Artist Comment:

A time skip of the two lovebirds. u////u