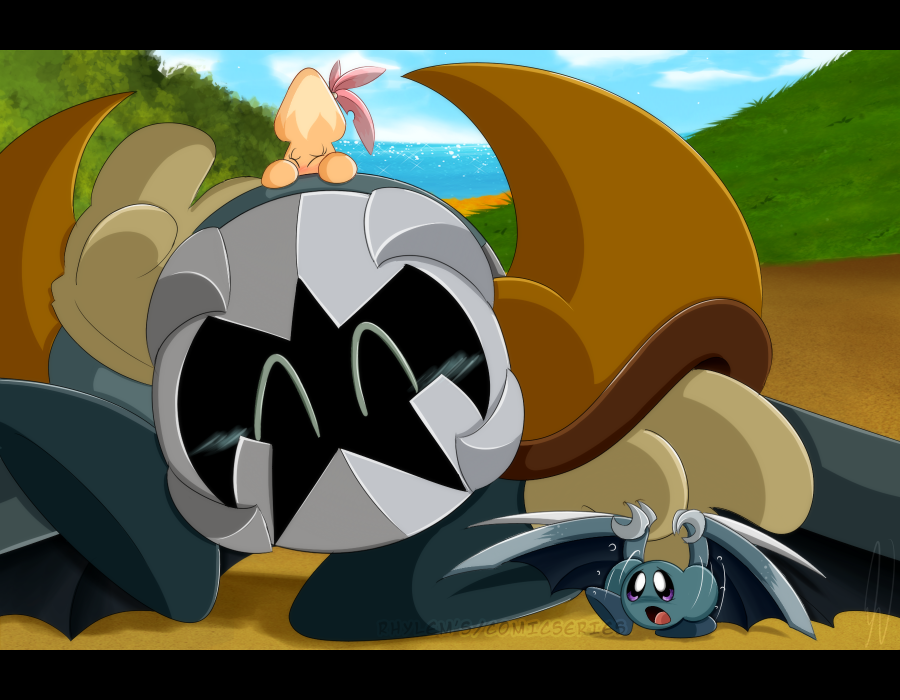 ​“Ba Ba Ba Baaaa!!!” Kade cried as his arms flailed and rose to the sky when he was falling backwards.

“Don’t worry, I got you,” Bate calmly said and held up his hand against the toddlers back.

Kade steadied himself and looked over at his father once he knew he was safe again,

“Do…you want to try one more time?” The elder chirped as he took another step forward,

Kade’s wings wobbled back and forth from the movement, and the little Puff clutched on to his father’s glove with his talons as he took another step.

“Very good!” Bate smiled, and looked up at his daughter to see his she’d like to join, “Emma, do you want to try?”

“Mmn-hm-“ The little squid shook her head and continued to clutch on to his back.

“You’ve been on my back for this entire stroll, are you sure? I know your mother would be super proud if you tried,” He said, hoping that’ll change her mind.

“Mnnnnooo—“ She whined and refused to let go,

“Alright, alright,” He said and gently patted her mantle to calm her instead, “Maybe tomorrow.”

Bate figured she wouldn't want to try. Unlike her brother, she had two extra limbs to consider when she walked. She’d always trip, as all young Squishies do, and because of it, Emma’s been a bit discouraged every time she fell when her brother didn’t.

"She’ll get the hang of it one day…” He thought to himself,

“Ba! Ba!!” Kade called for his dad, and Bate shook his thoughts when he saw the little Puff holding out his arms.

“Oh, are you tired?” Bate asked and hoisted him up. “Very well~  How ‘bout I finish the rest of the walk for us.”

When both toddlers were in the safety of his father’s arms, they nuzzled themselves into his soft leather gloves and started to babble amongst one another.

Bate could only smile at the pair as the trio made their way back home.
-End-