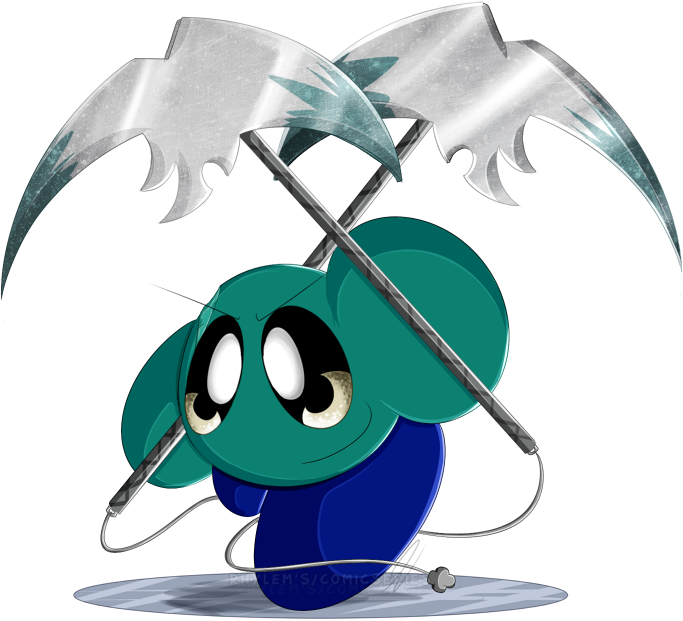 -To prove he can become a successful
Star Warrior without having wings.

-To become a master of
weaponry like his mentor.

​
​"I may not have multiple hands like my mentor, but he's trained
me to the point  where I don't need them to defeat the likes of you!"
​ 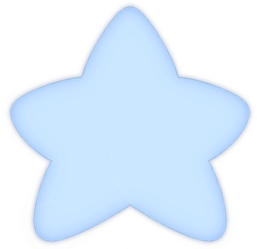 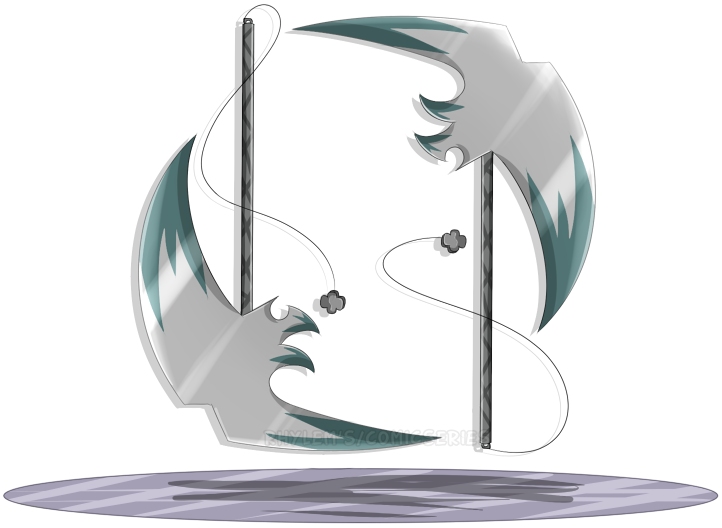 Duet is the name of the weapon Nonsurat currently uses. They are large, oddly shaped twin scythes
with the Crux insignia attached at the end. Gordon gave them to him as a gift for his birthday. Duet is
quite special- Gordon told him that they belonged to the founder of Central Crux, and that he should
cherish and wield them with pride. Nonsurat will only use them if he's in trouble, or instructed by Gordon.
*The creator of Duet is also known for forging another powerful weapon called Volzan.

​​Nonsurat currently has 3 noticeable scars on his head and back. The first one was caused when Nonsurat
tried to fly (against Bate’s orders) during class. He ended up falling and injuring the side of his head. The two
on his back were caused by an operation to have his wings removed. Nonsurat can get a bit flustered about
them since he’s the only one out of the five who has scars; though after learning that all three of his teachers
have many scars, and being told the stories behind them, he isn't embarrassed like he previously was.

Like his mentor, Nonsurat has a  dangerously high tolerance to pain. Seeing as he’s not a
​Gordo, however, Gordon does find this troubling if something severe were to happen to him
during training. He often has Mends check and evaluate him during their harsher lessons to make
sure he hasn’t broke, strained for sustained any serious wounds.

All of his comrades find it pretty ‘cool’ that Nonsurat’s unable to feel pain, and like to
test it out from time to time, to Gordon’s sheer horror.

When classes are over, Nonsurat spends his free time reading. Though his friends may find such a thing
boring and dull, Nonsurat finds it fascinating. He loves to study many things- from history, to science,
and even philosophy at times. Although he’s unable to read them at this time, he admires Atka once
he learned she’s a famous author and has published many books. He hopes one day to read everything
she’s written.
​ 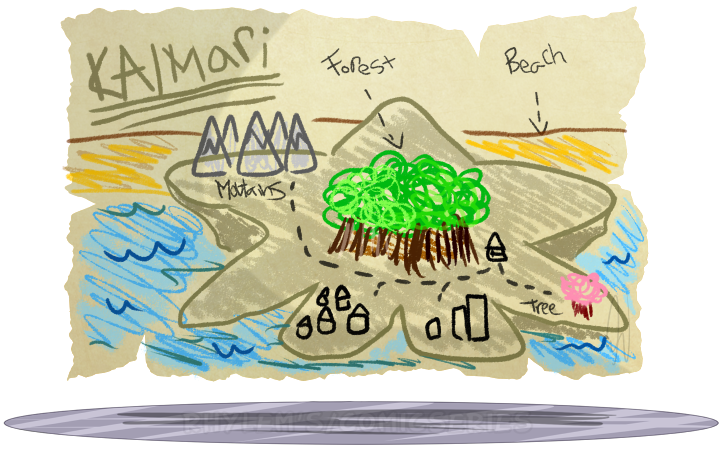 A unique hobby Nonsurat picked up from his friend, Marlo. Because the Squishy’s dad is a pilot and
travels all over the lands of Nova, Marlo took interest in all the maps he’s created, and eventually
wanted to try mapping herself. She shared this with Nonsurat, and both made a promise to travel
and find unexplored lands when they grow older. They also share the same dream with Dragato
and Cite.
​ 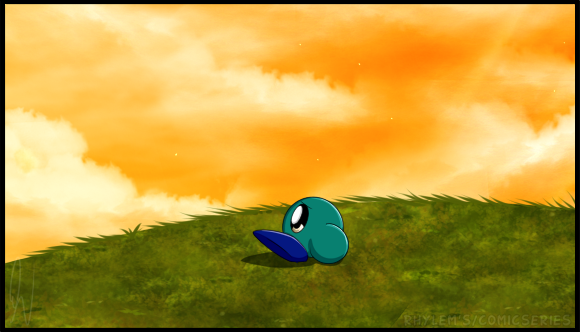 
After his surgery that left him wingless, Nonsurat developed a deep desire to fly. He masks his
true emotions in front of his comrades and says he's fine, but it truth- he’s very envious of them,
and tends to feel disconnected when they all take off into the sky. His negative views were soon
resolved when Bate allowed him to ride on his back whenever he pleases. In his later years,
Nonsurat has learned to live without having wings, and instead, focuses all of his time
sharpening his weaponry skills. Gordon claims that he does not need to have such
appendages to be splendid Star Warrior.

Nonsurat is a shy, timid Puffball who currently resides in the town of Kalmari. He
hopes one day to join and fight in the war like the rest of his comrades and trains
under Gordon to achieve such a thing. ​
​
​

Nonsurat is not as outspoken as the rest of his comrades, and tends to stay
quiet unless he feels like he needs to speak out. He’s quite shy around others,
but once befriended, you have a friend for life. Nonsurat has adopted Gordon's
loyal views of those he deeply cares for and will never turn his back on them;
stating that he'd rather put his own life on the line than to lose his friends.
Like Dragato, Nonsurat is seen as the voice of reason when one of his
comrades or friends do something that seem dangerous or foolish.

Though he doesn’t show it much, Nonsurat is a very powerful fighter and
is praised by Gordon in his ability to flawlessly wield any weapon that’s
given to him. Nonsurat is quite serious about his training and doesn't
like to fool around when Gordon is personally training him

Though frightened by his appearance at first, Nonsurat slowly warmed
up to the Gordo and now trains under him in the field of weaponry.

He greatly looks up to Gordon and relies on his advice whenever
he’s feeling conflicted; He trusts in his words and will never show
a shred of doubt when he’s talking. Because of this, Nonsurat has
developed certain traits such as excellent listening skills and
fierce compassion and understanding towards others.

Due to Gordon's caring personality and powerful strength, Nonsurat
sees him as the perfect role model, and will continue to follow in his
mentor’s footsteps before passing along the wisdom that
he’s learned from him to the next generation.

Nonsurat wasn't too fond of Alba once he saw his mentor always spending
time with her. He was afraid of losing his Teacher after he overheard Bate
and him discussing the possibility of him moving in with her. Heartbroken,
Nonsurat ran away to the outskirts of Kalmari.


Alba eventually found him and once realizing how he felt about her and Gordon,
she greatly apologized for not taking his feelings into consideration. While walking
back to his home, Alba thanked the small warrior for taking care and watching
over him while she was away. Nonsurat learned when they were out together,
all his teacher could ever talk about is how much of an amazing student he was.
Once they reached Gordon's home, she apologized once more and asked if she
could join his family with him and Gordon. Nonsurat, not as torn from before,
nodded and embraced the Squishy.

Alba now acts as a parental figure towards Nonsurat and,
like Gordon, will always be there for him.

Like Gordon, Nonsurat was quite intimidated by Bate because of his grouchy,
distant personality towards everyone. This all changed, however, when he saw
how protective and caring the elder was once he fell ill and needed to go to Central
for his operation. Nonsurat now knows that even though Bate doesn’t show it,
he really does care for him and the other 4 warriors.

Though he doesn’t express it like Meta, Nonsurat highly admires and
respects Bate on the same level of his mentor, Gordon.

Marlo is an extremely boisterous, outgoing Squishy that befriend Nonsurat after
she encountered him sitting all by himself one day. At first, Nonsurat was quite
guarded since he never really talked to anyone other than his comrades. His
shyness completely took over when she decided to keep him company
so he wouldn’t feel so lonely.

Though flustered, Nonsurat did his best to engage in conversation
as he thought it would be quite rude not to. To his surprise, he learned
that she was greatly fascinated in the sky and flying like he was. His
timidness soon became nonexistent as both started to chat away about
everything regarding the subject.

The pair, when not busy with training or work, meet up to play, and try
to come up with ideas of how to fly.(Though all of their plans have
miserably failed) Both of them highly enjoy being around
one another, and consider themselves best friends.
​

Nonsurat sees Dragato as one of his closest friends. He’s not as
boisterous like his other comrades, and tends to go to the magenta Puff
when Gordon or Bate isn’t around to help. Before Marlo, Dragato was
the one who kept Nonsurat company when the others would play
in the sky. Though both have different teachers and other friends
to hang out with, the pair finds time out of their day so they
can talk to each other.

-Nonsurat is a very heavy sleeper. The only
one who can easily wake him up is Gordon.

-Because of his fragile wings, Nonsurat did not participate in Bate’s
class as the elder thought his wings were not fully developed yet.
He had to sit on the side during lessons.

-Nonsurat is currently the only one of
the five who traveled to Central Crux.

-Nonsurat is the only Puffball in the group without wings.

-He is considered the 2nd strongest of the 5. (First being Arthur)
But is deemed the smartest out of the bunch. It is said, however, that
he /is/ the strongest, but is just too humble to say it because he respects
Arthur, and sees him as their leader.
​
Species © Nintendo/ HAL Laboratory
Interpreted characters created from said species © Rhylem