Master of tracking, hunting,
and fighting.

Is able to make a variety
of weapons using ice.
​

​
All it takes is one weak link for the entire chain to break.
​ 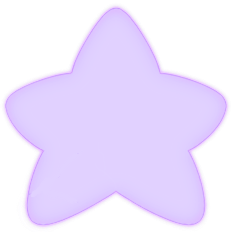 Meta gave Kes his Warp Star when they first met, and informed her the unique ability it
has to track its owner. He hoped she would be able to summon it so it would lead
her to Kalmari Town. To his and Bate's surprise, she was able to summon and
locate Meta. Kes ended up returning his star, but as they grew older Meta gave
it to her as a form of trust and appreciation to.  She's currently the holder ​of
​his Warp Star to this day. 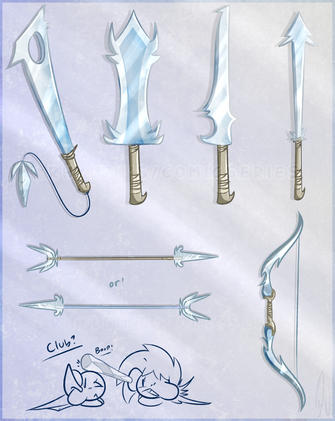 Using a hand carved hilt made out of the bones of the creatures she's hunted in the
past, Kes is able to form various ice weapons to suit her fighting style. She has a large
selection varying from swords, axes, and arrows. A hunter Leo is required to master
one weapon before joining a squad, but Kes studied as many as she could in the case
her ​main weapon fails during a hunt. Because of her vast knowledge of all that she's
learned, she is considered one of the top hunters in her village.
​ 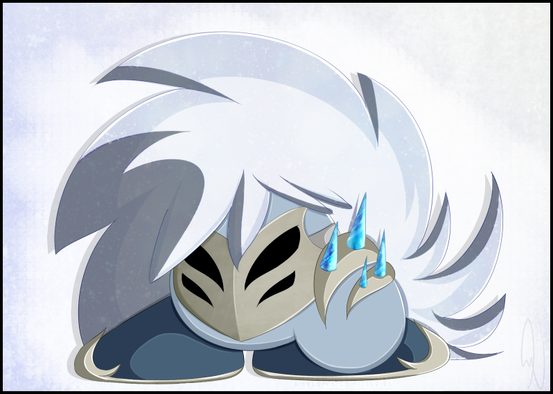 The masks Frozen Leo's wear are earned differently compared to the ones of Meta and his comrades.
One must earn it in the form of a certain task or duty. For Kesuk, she earned hers by successfully
leading a group hunt. The bones of the beast she killed was forged into the mask she now wears today.

It’s quite the honor to have one, and many of the younger Leos in the village look up to their masked
brethren for guidance or advice so they could one day earn theirs. Kesuk wears hers when she goes out
to hunt, or is sent away to another area to gather supplies. Around her village, she prefers to wear her
​headpiece, or have her hair down.
​ 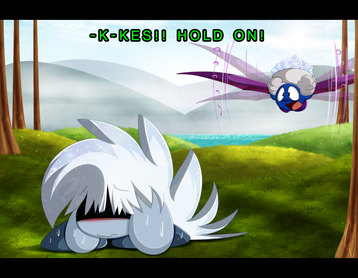 Being an ice based Leo, Kes is very vulnerable around fire or heat. Anything above a
certain degree will cause her to fall ill until her temperature is regulated. A Frozen Leo
is able to withstand warmer climates, but they must adapt and slowly get used to it.
Kes will eventually get used to the warm summers Pop Star has, but it still makes her
quite uncomfortable in some cases.

It's very common for South Nova Frozen Leos to have two
different eye colors. Kes, like her father, shares one purple,
and one green eye. Meta and the others find it quite unusual,
and compares her to Alto since he has Heterochromia ​as well. 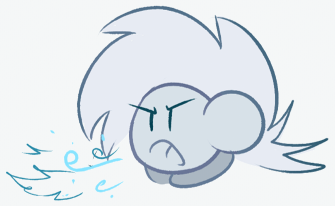 ​Similar to Burning Leo's ability to breath fire, Frozen Leo's can do
the same with ice. It's one of the first abilities every Frozen Leo is taught,
and Kes regularly uses this ability for hunts to stop rampaging creatures
in their tracks. She is also able to lower the power of this attack, and use it
to cool down a room, or freeze food for storage. 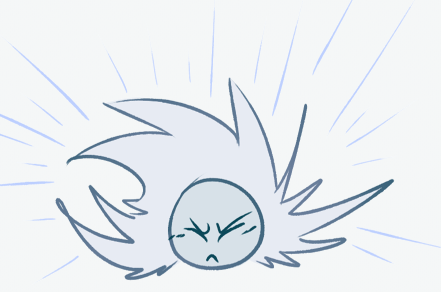 ​Freezeing the tips of her hair, Kes is able to shoot sharp
ice needles. She mainly uses this technique to protect
herself from prey getting too close to her. This offers
the ability to gain distance from each other.
​
​ 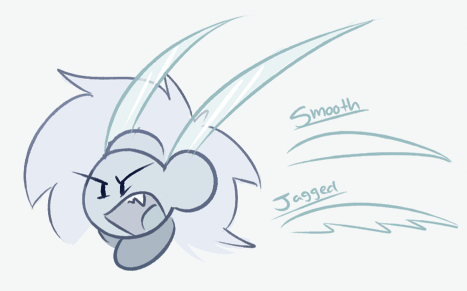 ​​Another common ability Leos have is forming sharp blades out of ice.
This is a more trickier attack to master, and it may take many months of
practice to perfect it. Kes uses this attack if her main weapon breaks and
​she's defenseless. The doesn't prefer to use it often since she must use
close combat to land a hit, and the blood from the kill tends to get on her. 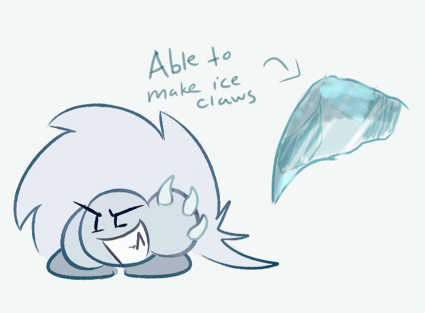 ​Like the ice blades, Leos are also able to form claws as well. Kes uses
this ability often to get a better grip on her weapon, or to scale large,
rugged terrain. If needed, she will use them as a means of defense and
offence.
​
​

​One of Kes' stronger attacks. Kes has the ability to form her icy breath into a shape
of an animal. This ability took many years to master, and even then it causes Kes
to become fatigued. This attack takes a lot of power, so Kes makes sure to only use
this attack if all else fails.  Being caught in this fierce echo may cause sudden death
as it will freeze anything it touches. Like the ice breath, she is able to tone down the
power of this attack so it won't trigger avalanches.

This attack was inspired by Bukisets and their ability to form crystal pillars. Kes
uses this ability if she, or her comrades needs to fallback and regroup. Having pillar
walls will give them enough time to escape since breaking them prove to be quite
a challenge.

Considered one of the hardest moves to master, Kes as finally learned to wield this
​powerful ability. Using this move will cause a major shift in temperature. A nice sunny
day will become a fierce winter blizzard in only a few minutes. Kes uses this ability back in
her home in South Nova; the constant blizzards will keep her village hidden and untouched
from outsiders.

A very common hobby many Leos have at a young age. They eventually stop as
they grow older, but Kes still find joy in building forts, and various sculptures around
her village. Many of the younger Leos enjoy them as well, and her friends back in Kalmari
Town. After moving to Pop Star, Kirby will often ask her to help build sculptures
​during the cold season.

A once powerful hunter and leader in her village, Kesuk left her home
in South Nova and moved to Pop Star to protect, what she is to believe, the last
Star Warrior. With Meta by her side, the pair will learn everything there is to raise
him under the watchful eye of Kana, Kirby's current caretaker.

Being the protector of Kirby, Kes has a more serious, less playful air to
her as she took this mission with the utmost importance. When she realized
that Meta was not capable of taking care of Kirby by himself, she started to be
less of a bodyguard and more of a caretaker. Her hard tone and nature started to
let up, and was replaced by a more caring, softer demeanor.

Like her younger days, she is also known to be incredibly playful; in order to let Kirby
know he was in a comforting environment. She is very protective of not only Kirby, but
Meta and Kana a well, and can easily become a fierce opponent to anyone who dares
threaten them. She can be a bit strict at times when she senses the presence of danger,
and will have little lenience when Kirby disobeys her orders.  All and all, her personality has
shaped the way Kirby sees her, and he will often call the Leo "Momma" at times because of it.

Considered Kes' closest friend, she greatly cherishes the bond they share. Although
scuffles and petty fights may happen occasionally due to Meta's stubbornness, Kes sees
Meta as someone she can trust and rely on. She is very protective of him and vice versa.
Having Meta around helps ease the homesickness she has when thinking about her home
in South Nova. Although she misses her village, she often sees Meta as part of her family.
As long as they have each others back, Kes will always be there for him.
​

Kes was assigned by Lady Atka to watch over and protect Kirby; for he is thought
to be the last Star Warrior in existence. Kes took ​the role with the upmost respect
for being picked for this job. As time went on, she noticed how Kirby saw her as a
parental figure as he would often call her "Momma" at times.

Kes never saw herself as his mother and felt conflicted anytime he would call her
that. She started to question her mission to be his protector and sought guidance from
Bate since she knew he had the same thing happen when he raised Meta. Eventually,
Kes made her decision to stay with the warrior to look out and protect him. She knew
Kirby has no one else but her and Meta to watch over him, so she will accept the title
Kirby gave her and will be the parental figure he sees her as.

That being said, Kes has a softer personality when it comes to the pink Puff. Anytime​​
something would trouble the warrior, Kes will do her best to calm him ​​down and
make him smile. When it comes to training, she and Meta will take turns every week.
She will often lecture him in how to properly defend himself, while Meta works on
offence. Off class, Kes teaches him how to carve his own mask and various trinkets
using the bones of the kill she brought home. Although Kirby is not her biological
son, she raises and treats him as her own.

Kes shows great respect for Margalo since she is the Guardian of Meta. Although
she is his protector, Margalo trusts Kes to watch over him when she is not around.
Both get along quite well and love to keep each other company when Meta is off
training Kirby.

After learning Meta gave Kes their Warp Star, Margalo started to get less involved
in their lives since the Leo started to fill her spot as his other half. Margalo will
always be there for Meta, but knows he will likely rely on Kes in the future.
She believes in her Master, and puts her faith in the Leo as well.

Kes has nothing but the utmost respect for the elder. Being the mentor of Meta, Kes
sees the old warrior often. When visiting Kalmari, she would stay in the guest bedroom
of his home; she later found out he suggested the idea since he knew how much she
wanted to visit. While living under his care, he would always make sure the home was
a suitable temperature as well as making sure his home was stocked with her favorite
Kalmari teats. Kes saw him as a respectable mentor since she would often go to him for
advice when her father isn't around.

As she grew older, she would often help Meta take care of the elder if he falls ill, or needs
certain chores to be done; picking up groceries, cleaning around the house, cooking.  Kes,
like Meta, enjoys having him around and will often encourage him to visit Pop Star when he's
able.

- Kes has a huge appetite and is known to rival Kirby's eating habits.
​
-Kes will often carve a small figure using the bones of the prey she's hunted.
She has a rather big collection of them, and usually hands them out to the
younger Leos in her village.

-She loves to cook and will often be the one who makes meals for her family.

-Anytime Kes has killed in a hunt , she will always pray and thank the animal for
giving their life to her. She will never let anything go to waste, and make sure to
​tell the story of her hunt before they feast.

-Kes loves star gazing and is easily able to read and navigate the sky. She has a
huge fascination with the aurora borealis that appears frequently in her village.
She misses it often since Pop Star doesn't have it unless she travels North.

-During her first year on Pop Star, Kes would live in the refrigerator (Meta's
​Idea) because she would constantly fall ill due to the warm temperature.

-When it's summer, many would ask Kes if she could use her ability
to lower the temperature for them. (Whether be a restaurant, shop or
their house.) Kes finds it slightly annoying, and will often hide until the
heatwave passes.
​
Species © Nintendo/ HAL Laboratory
Interpreted characters created from said species © Rhylem