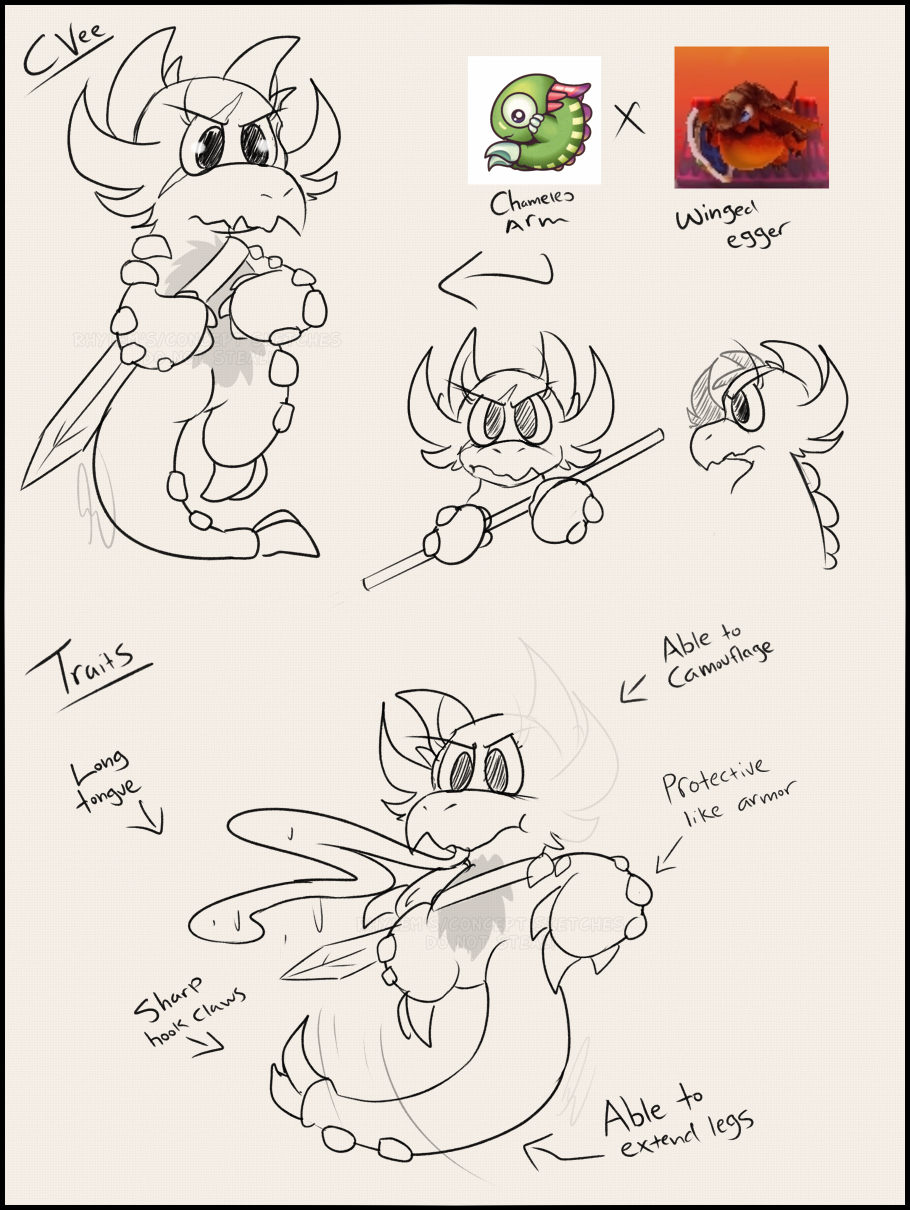 I was doodling some stuff during my lunch break for Meta Knight's arc, and I decided to work on a certain character that appears when he first visits Pop Star. This is still a concept, I may change it completely, but I kinda sorta like it. XDD

This is a hybrid (Chameleo Arm X Winged Egger) named CVee. (Vee for short) She is actually the second Chameleo Arm fc I have- the first not being released at this time. Anyways, it was really quite fun making her. I don't think they are characters many use, and Chameleo Arm was one of my favorites as a kid! >v<;

I honestly don't want to say that much since I don't wanna spoil anything major, so I'll try my best to keep it short-

She is a bodyguard to one of the elder residence of Pop Star AND one in general when wandering demon beasts get to close to her home. Though focusing more on the one she's protecting- Said elder isn't a Guardian BUT she watches over one of the temples (AKA "The place of Healing.") sorta like what Atka does. Also- Her native language is chirp, and she can't speak a lick of english. Vee is able to translate for her, however.

Vee ends up meeting Meta Knight when he started acting hostile towards the elder for taking his mask. (For reasons that will be explained later) She came to her defense and deems Meta as a 'dimwitted runt' after restraining him with her tongue when he refused to calm down. Mask or not, the town doesn't take kindly to anyone putting a hand on their beloved elder in a threatening manner. After a few days of the trio greatly cooling off, Vee sticks around for translating purposes, and to show Meta around their little town once he decides to stay.

Vee prefers to stay camouflaged with her surroundings most of the time for defense purposes, and several other reasons I may or may not keep. She is quite brash in some cases, but she can be a great source of company as she knows a lot about Pop Star and the history of Star Warriors. Her father, who has been deceased for several years, was actually a Star Warrior. This is why she tends to stick around the temple and watch over the town since he's unable to do it anymore. (Her father was also the owner of one of the legendary weapons Lord Paverok created; like with Duet and Volzan)

And one last fun, little tidbit: She is extremely fond of Lady Atka since she reads her books and was shocked to learn that Meta not only knew her, but his mentor was the Master of said Guardian. She asked Meta to get all of her books signed when he visits South Nova again.