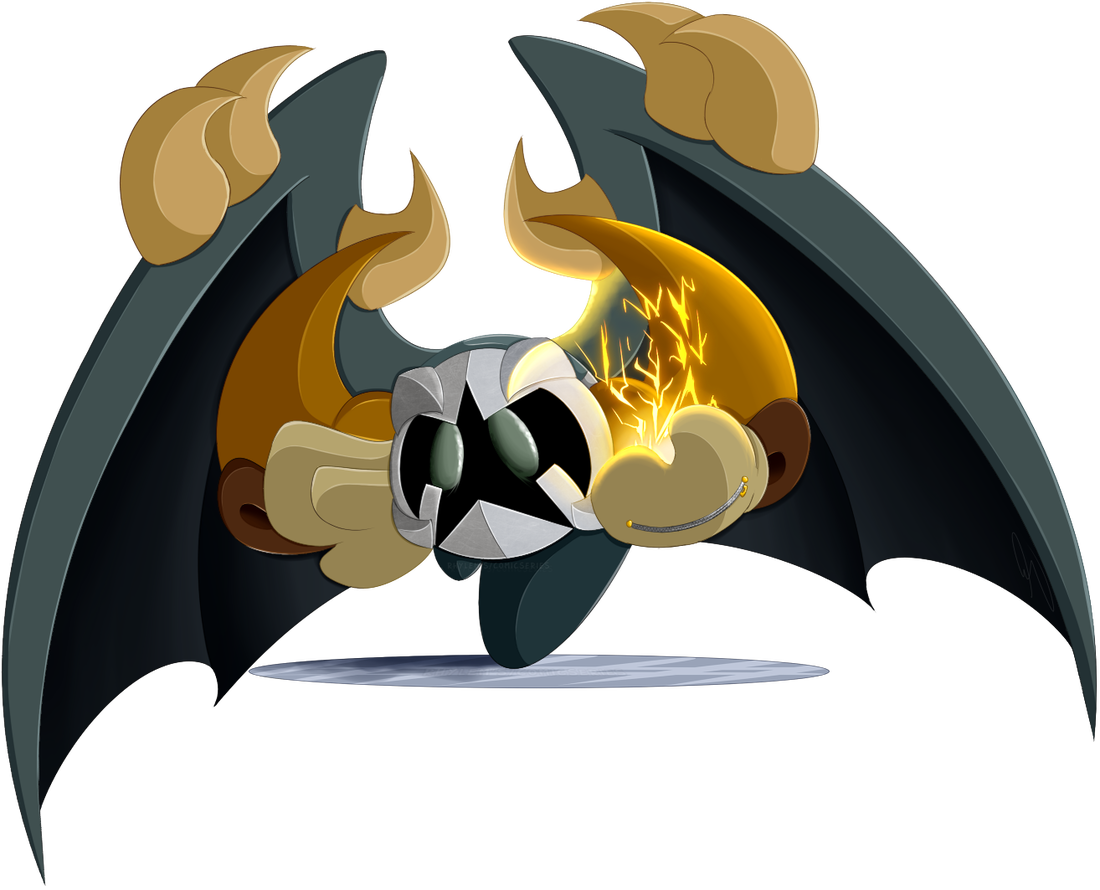 He has three talons located on the tip of each wing.

​*Outside of fighting, he usually uses them
​to grab things out of his reach.
​

"I don't have the time, the patience, nor the
​lung capacity to deal with you."
​

After an incident in East Nova, Bate is completely petrified of being
bound or confined. Something as simple as getting tangled by rope
or being hugged will cause him to panic and flip out.
​

Because Bate relies on brute strength and his wings when fighting, he rarely
wields weapons. He's only done so a handful of times and isn't the best
when it comes to battling with them. Bate can last for a few minutes at
best before easily being disarmed.


Swimming
​
After Meta invited him to the beach to go swimming, all 5 students
found out Bate's secret inability to swim. He never learned growing
up, and any time he does go into the water he ends up sinking. Even
with a floaty, he prefers to avoid any sort of body of water in fear of
​drowning. ​​

During his days in East and Central, Bate was diagnosed with asthma when
he'd had to go to the hospital due to trouble breathing. It was revealed that
the polluted air from both Central Crux and East Nova was greatly effecting
his health. Bate, not wanting to leave his family behind, stayed and wore a
respirator throughout his entire adolescence. While it did do a good job
filtering any debris, there were days where it didn't help and caused the
Puff to become gravely ill.

Since moving to Kalmari Town, Bate doesn't have much of an issue
unless he breathes in any dust, smoke, or debris that triggers it.
Usually the only time it gets really severe is during the winter/cold
season, since everyone uses their fireplace to keep warm. Bate prefers
to travel to South Nova for a few days during this time since he loves
being out in the cold and snow.

Bate also does his best to keep his house extremely clean and can be
a bit strict when Meta and the others don't tend to the house while
living with him.

Bate ended up getting his ailment at quite a young age, and it has
greatly impacted his life in several ways. Because of it, this has caused
him to become quite weary and embarrassed in some cases since he
tends to not only cough and wheeze a lot, but has to constantly rest and
turn down his students' requests to play with them.

In worse cases, he ends up coughing up blood and must be bed-bound
or even hospitalized for several days until he's better. Bate later
reveals to Gordon that he absolutely hates living like this, but
ends up accepting his way of life when his other friends
​consulted him.

This is mostly directed towards Gordon. Bate finds it irritating and mildly frustrating
when Gordon becomes overly protective with is well-being. Gordon will not let him
do anything if he thinks it could severely injure him. If Bate disobeys and ends up
hurting himself, Gordon will go on hour-long rants and start lecturing him until
Bate apologizes for not listening. He doesn't see his actions as being helpful
at certain times, especially if it's something extremely petty, and finds it a
form of belittlement. While he is grateful that he has a friend looking out
for him, there ​are days where Gordon can get a bit overboard
​and overly dramatic.

While Bate prefers to live a peaceful, quiet life, his new students are making it quite
difficult to achieve such a thing.  Previously retired, he currently holds classes to teach
any winged creature in Kalmari how to fly. So far, only a few have been taught under him.
He is extremely  strict during class hours and hates to be interrupted.

When classes aren't in session, Bate spends most of his free time resting and has a short
temper when woken. When he is not sleeping, Bate loves to fly and cloud/star gaze. When
it comes  to any type of fighting, Bate tries his best to avoid it. He hates confrontation and
​will only show some type of strength if he's in trouble.

Bate was brought up by a mother Birdon that found him while she was migrating to
East Nova. While staying with her, Bate was taught how to fly and perform basic
fighting techniques with the use of his wings. As he grew older, Bate returned
the favor by watching over her (and her newly hatched chick) every night. During
the day, Bate would visit Central Crux and work in an apprenticeship to make
masks for the GSA. In his free time, he would travel back to East Nova
to teach the hatching how to fly.

At the age of 2,100, Bate flew to North Nova to join and train under the GSA.
Even though the training left him exhausted at the end of each day, Bate still
kept his promise and watched over his family. The night before bate was to
depart, a group of hunters ambushed his home and attacked them. Bate
tried his best to fight back, but was slowly overpowered and defeated in the
end. As a result, he was unable to fight in the war and was left behind to
recover from his injuries in West Nova. Bate has not heard from his childhood
family nor paid a visit to East Nova after the incident. He has, however, heard
that the residents of East Nova spotted a lone bird leave its nest
and that it has yet to return.

Bate has a more serious personality than everyone else. He likes things
to be orderly and will get angry if that balance is disturbed. He is also
​very stubborn and refuses any type of help even if he needs it

Bate was the first teacher of the 5 puffballs: Arthur, Dragato, Falspar,
Meta and Nonsurat. He taught them how to fly, and ended up taking
Meta and Arthur as apprentices to broaden their wing capability.
​
​

Gordon is Bate's closest friend. Even though Bate claims that the Gordo is
annoying and over protective half the time, he's very grateful that he has
someone like him who understands and cares about him. They both share
a house in Kalmari, and are usually seen together when they aren't teaching.

Bate and Ramset didn't see eye to eye when they first met. Bate found
Ramset very annoying and refused to pay any attention to him. The
hot-headed Sasuke refused to be treated in such a manner. Because of
it, he ended up throwing a smoke bomb at Bate, hoping to startle the
Puffball. Unfortunately, Ramset didn't know about Bate's ailments before
he chucked the bomb. Bate ended up having an asthma attack after
inhaling the smoke and was taken to the hospital.

A few weeks passed before Ramset eventually apologized to Bate. He
admitted that he never wanted to hurt him and that he only wanted
to be his friend. Bate accepted his apology and decided to give him
another chance. Bate still finds him irritating from time to time,
but learned to accept the Sasuke's crude behavior as a
sign of appreciation.

Atka is a very wise Sphere Doomer who lives in South Nova. She is Bate's first
childhood friend, and both share a close, strong friendship. Atka will do anything
to help Bate and vice versa. He visits her from time to time to see how she's doing
​(usually on her birthday).
​

Shieff is Bates old mentor when he used to work in Central Crux.
He was taught how make masks for the GSA under him at the
age of 1,400. Bate looks up to him and will always trust
what he says.
​

Suna is the adoptive mother of Bate. She found him in South
Nova during a blizzard and took him to stay with her in East
Nova. She taught Bate how to fly and to fight using his wings.
Bate loves his mom with all his heart and will do anything to
protect her.

Ton is the younger brother of Bate and Suna's biological son.
Both share an extremly close bond and Bate takes pride in training
is younger brother how to fly and fight. When their family was attacked,
the little Birdon tried to fight back (against Bate's orders) and ended up
getting killed in the process. Bate doesn't like to talk about his
adoptive family to anyone - not Gordon, Ellie, or even Atka.

Luna and Bate worked together in Central Crux making masks and
other various objects for the war. Both of them became fast friends
and loved to hang out during their breaks. As the years passed by and
Bate decided to join the war, he made a promise to his childhood friend
that he will return and find a place away from Central so they could
both live together. Although Bate only saw her as a friend, Luna
​had a secret crush on the young Puff. ​ 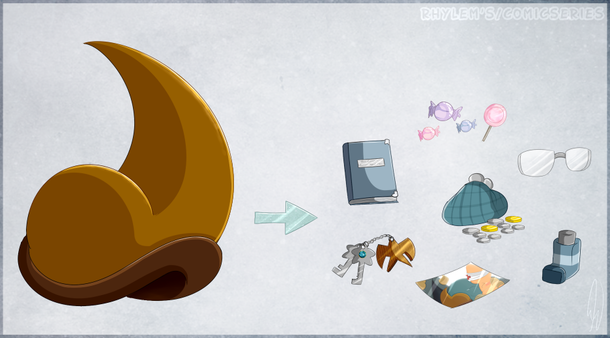 Bate received his pauldrons from his mother, Suna, as a gift when he informed her that he was joining
the GSA. A bit big for him growing up, he finally grew into them at a later age and now wears them along
with the mask he received from Luna. Although Bate never utilized them in war, he still wears them as he’s
accustomed to having them on. They are extremely heavy due to their size to the point where many of his
students who were told to fetch them for Bate complained they’re unable to lift or even budge them. Gordon
often suggests that Bate should stop wearing them due to their weight and the amount of strength it takes to
​support them. Bate, however, doesn’t have an issue with their weight and continues to wear them regardless.

Bate also stashes a variety of items under them as they’re quite spacious underneath. His more important
items like his keys, money, and glasses are under his left pauldron, while his right one has a plethora
of various, miscellaneous goods. If one of his friends or students are looking for a certain item, chances
are that Bate’s probably carrying it. Due to the elder having just about everything stored under his
armor, many see him as a walking cupboard.

-He says he's not fond of candy
or sweets, but can be seen from time
to time nibbling on chocolate.
​
-Bate considers himself more like a bird than a
puffball since he was raised by a bird.

-He hoards many items under his pauldrons.

-Bate was taught a second language by his
mother. He is fluent in understanding and
speaking the language of birds.

-When angered, Bate will tend to swap
languages and chirp at times when he's yelling.