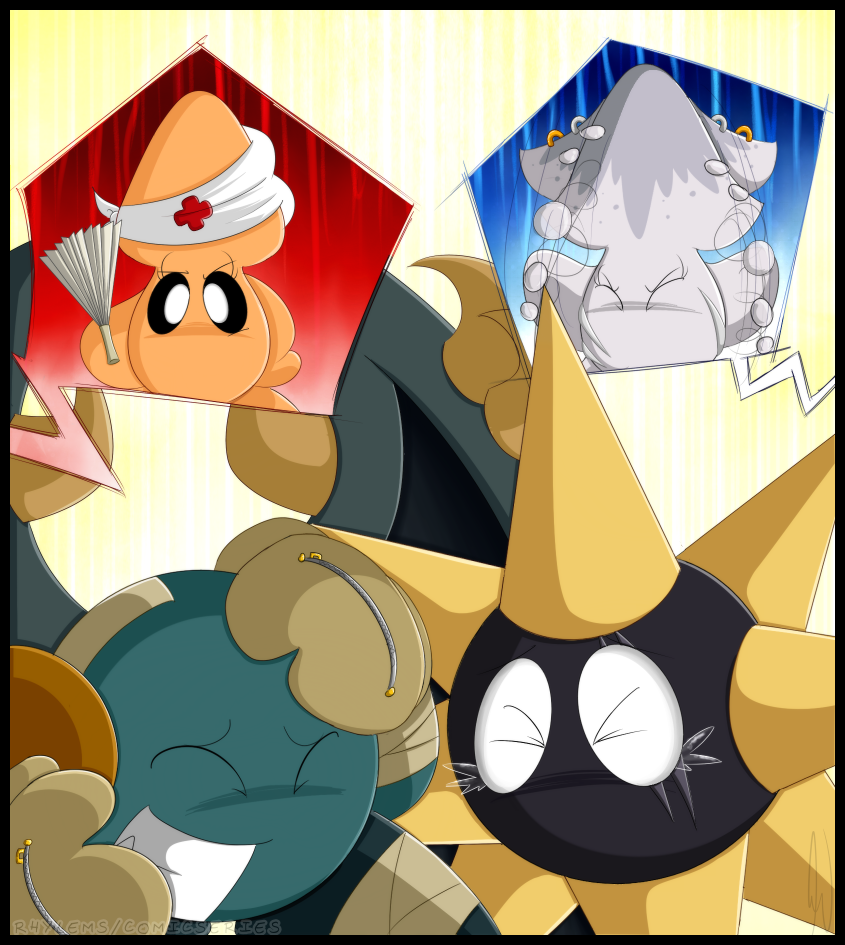 "BATE!!!" Gordon burst through the door of his comrade's room and quickly headed to him. "How's the recovery? Doing well? Getting enough rest?"

"I was...until you broke the door down." Bate spoke, slightly sitting up. "I'm pretty sure Ellie won't appreciate you tearing our new house apart...."

"A-ah, right. Sorry about that." Gordon weakly smiled, hoping he wasn't too mad about it. "I'll be able to repair it when we get back, promise!"

"Why, from spending time with your greatest buddy! Ready to head out?!!"

"A-ah...." Bate slightly motioned out of bed and removed the blanket he was snuggled in. "You know I'd love to, but...." He showed his comrade the various bandages he was wrapped in. "I'm still not fully healed. Ellie told me to take it easy until then."

"Awww, Bate." Gordon pouted. "It's been several months. Surly you're healthy enough to get one liiiiiiittle drink with me."

"Well...." Bate started to contemplate.  It did sound temping, but he promised not to leave the house.

"And don't worry! It's not even going to be for an hour. We'll just head out, have a quick drink and come right back. Ellie won't even notice and everything will be fine!"

"Hm, if you put it that wayt...." The warrior eventually smiled back and decided to join him. It's been a while since they last spent time together and surly one little outing wasn't going to harm his recovery. "Alright, let's go."

"Yes!!!" He threw several of his arms in the air and gently held them out for Bate. The Puff grabbed them as he slightly winced when pressure was put on his feet. While he was still sore, it was bearable so Bate pressed forward.

"Remember, Ellie can't find out about this." He whispered. "Let's try to make it back as quickly as possible."

"Nothing to it!" Gordon reassured. "You can count on me!"

"SIR B. BATE!!" Ellie's voice hollered when the Puff stumbled into the house. Apparently their little 'trip' took several hours too long. Bate yelped in pain when Ellie pinched his wing to pull him in the living room. "Do you realize how late it is?"

"And do you even know how worried I was?" She spoke, "I told you to rest, not go gallivanting with Gordon and get drunk! Sweet Nova, Alba and I have been looking everywhere!"

Ellie pointed to the direction of their room, not amused. "And what happened to the door? It look like someone took a sledgehammer to it!"

Sweet Nova, he forgot about that. "Oh....I forgot.....Gordon, he.....ah......" Bate stood up to try to fix it, but soon collapsed on the floor. He wasn't sure if it was his injures, or the alcohol but Bate knew he'd hear it in the morning. But for now, maybe sleeping it off would be for the best.

"Bate?" Ellie called. "Bate are you listeni-" She suddenly stopped the sound of loud snores filled the air. Taking a few steps towards him, she keeled on the floor and sure enough, he was sleeping. "Oh, Bate...." She clutched her mantle in disbelief and tried her best to lift him to the couch. Unfortunately, Bate was much heavier and Squishies didn't have the build to move such things. Grabbing the blanket from the couch and a pillow so he could rest he head, Ellie left his husband on the floor as she took the couch to watch over him.

"I'm not letting you off that easy." She huffed, settling in to make sure he doesn't run off when he wakes.

Gordon's attempt to sneak Bate out so they could get a few drinks diiiiiidn't turn out like he had planned. They noticed. oAo;
Species © Nintendo/ HAL Laboratory
Interpreted characters created from said species © Rhylem