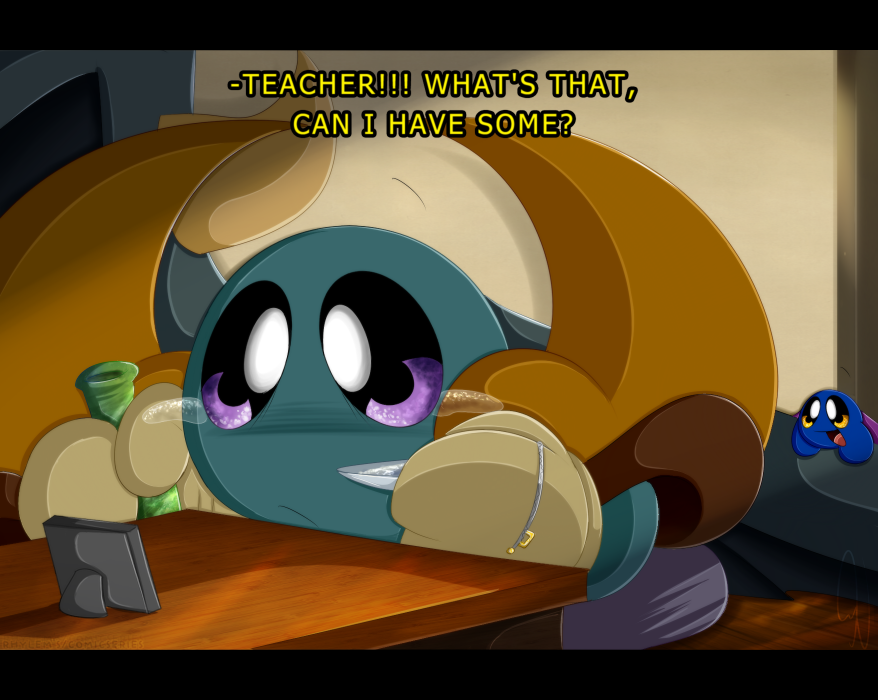 ​Remedy
Sir Bate / Meta
​
​
​"Another year down." Bate raised his hand with a small saucer filled to the brim with his favorite sake. A melancholy sigh escaped his mouth before the warrior downed the warm liquid. He gently placed the porcelain back on the table once he was done and sat in silence for a bit before generously pouring himself another cup. Picking it up, Bate hesitated for a moment.

"N-no....I...." He fumbled as a few drips hit the table when he pulled his lips away. He set it back down and lowered his wings. Glancing up at the framed photo of his late wife, Bate couldn't help but turn away.

"I know I quit long ago, but...." He mumbled to no one and reached over to the saucer once more. "I suppose I can't help it." He took a light sip. Besides, it's been a long time since he was alone like this.

Alone with his thoughts.

"Teacher!!! Oooh, what's that, can I have some?!!!" Meta's voice sliced through the silence that almost made him drop his drink.  With wings happily fluttering when he reached him, the toddler asked again.

"What is it, orange juice, lemonade?!!! Why are you drinking it in such a small cup? Do you want me to get you a bigger one in the kitchen?"

"Gumball-" He spoke, but was soon cut off not a second later.

"M-Meta. It's not juice. I....." He glanced at the cup for a moment in hand before giving a sigh and setting it down. Leaning his arms on the table, Bate rested his head on them and eventually looked back at his student. "Why didn't you go with Gordon and the others?"

Being around Meta for this long, he figured it was because he was all by himself.

Of course, he was right. Although Bate appreciates the company and isn't as grumpy and distant like he once was...there are certain times where he prefers to be alone. This shouldn't be a time, but his stubbornness proved to be much greater.

"Gumball, go with your comrades and friends. I'll join you later tonight...." He insisted.

"But later isn't now." He nudged him again, trying to pull him out the door. "C'mon, Teacher, pleaaaase?"

"There's....some things I need to finish before I head over. I'll be out soon, I promise." He said, hoping his student would listen this time around. Meta didn't seem to pay attention and focused his task on figuring out what his mentor was drinking.

"Is....it medicine?" Meta tilted his head and pointed to the bottle on the table. "Is that why you're not with everyone else?" He asked, knowing his teacher likes to be alone when he's not feeling well.

"I....ah...." The old warrior stammered from his statement. He slightly frowned and grabbed the antique bottle that was gifted to him from Gordon when he and Ellie got married. "Y-yeah...you could say."

Sad eyes looked over the bottle in hand. He placed it back down, not in the mood to finish the rest. "No, not really....."

"Whaaaat?" He puffed up his cheeks in anger. "I'm gonna tell Dr. Mends, then! How can we play games during the festival if he's not doing his job right!! Wait, I'll tell Teacher Gordon to say something to him...I don't want to be yelled at."

A soft chuckle was heard, before Bate reached over and patted his head. "No, no. Dear Nova, please don't do that. The last thing we need is getting scolded before the year ends.

"But I want you to feel better. If it's not working, we won't be able to celebrate together!" He pouted, reaching over to inspect it. The pulled away from the harsh smell of it and tumbled back in the safety of Bate's grasp.

Bate glanced between the half empty bottle and Meta. Dear Nova what was he doing. This wasn't him, he moved past this. He promised he wouldn't look back, no matter how much it pained him. But...it helps so much. Coaxing his emotions when he mind strays afar for too long. So many memories, so many happy times...

"H-hey! Is that Miss Ellie?!" Meta wiggled out of his grasp and picked up the photo.

"M-Meta." Bate tried to reach for the photo but inched back when he spoke.

"Did you used to celebrate the festival with her too?" He happily asked. "Like how we do now?"

Meta saw he was hesitating with his answer. His smiled soon disappeared when he realized how hurt his teacher became, and he gently placed the photo back on the table. Maybe that's why he wanted to be alone. He's always been alone during parties or festivals unless he intervened and badgered him enough to go. It probably hurts to celebrate without her.....

"I....I'm sorry, Teacher. I...thought it would make you happy talking about all the stuff you used to do. If...you wanna celebrate alone, I can still catch up with Teacher Gordon." He softly spoke, getting off the table. While his teacher knew he likes spending time with him, maybe he should learn to respect his wishes during certain times or events. He never lost someone as important like he did before.

As he made his way to the door, he let out a small yelp when he felt himself being lifted. He watched his mentor lower his taloned wings towards his arms and he looked up when he was back in his grasp.

"What did I do to deserve someone as caring as you, Meta. A child no less."

"We all care about you, Teacher.....well, maybe I care a bit more." He said, knowing Arthur would probably fight him on it if he said such a thing.

"I can tell." He smiled fondly. "There's not many who would skip out on a day full of candy and fun to spend it alone with their mentor."

"It's always fun being with you, though!" He exclaimed. "Unless you're sleeping, that is...."

Meta beamed when he saw his mentor began laughing. He hugged him, thrilled he was back to old....or new self again.

"Alright, I'm sure you waited long enough. How about we meet with the others now? I'm sure they're missing you too as well." He got up from his seat and opened the door.

"Yaaaay!!!" He smiled but looked back to the table. "Wait, you're not gonna get sick are you? Aren't you gonna finish the rest of your medicine?"

It's still a hard road ahead for Bate to move on, but Meta's making the journey much easier.
Species © Nintendo/ HAL Laboratory
Interpreted characters created from said species © Rhylem