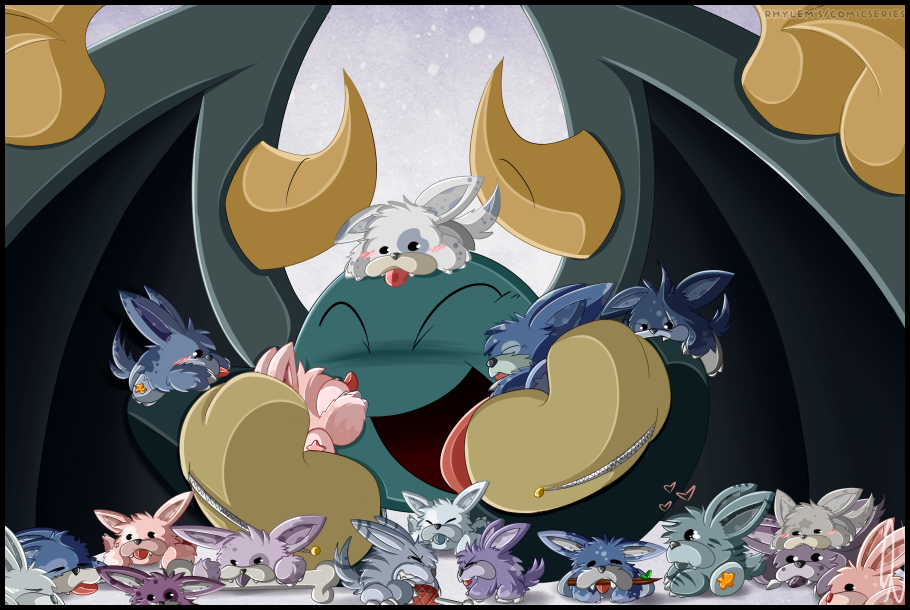 Puppies!!!
Bate
​
It was a day Bate looked forward to every month. The day after each full moon, his precious companion and loyal Gao Gao, Kisses, would leave his home in the outskirts to pay him a visit. Bate could hardly wait- since Meta and Arthur left for the GSA several years back, his life has been very quiet. Days that were once filled with breaking up scuffles or going to the candy store were now filled with long afternoon naps or small strolls through Kalmari Forest. Sure, Ramset would occasionally get him tangled into one of his idiotic shenanigans, but most of the time his days were pretty uneventful. This week, however, is different. With everything planned out, Bate hopes to spend as much time with Kisses before they part ways for another month.

Since Kisses wasn't expected until late afternoon, Bate began brewing a cup of tea and started fixing himself an early lunch. Nova knows he wouldn't have time to eat once he arrives. Softly humming to himself, Bate stirred the pot of soup and poured himself a generous bowl once it was warm enough for him. With a hot bowl of soup and a small cup of tea in hand, Bate made his way to the living room to enjoy his meal. Before he could make it to his seat, however, the ground below started to softly shake. It stopped for a moment but returned soon after; becoming more powerful than the last. Bate quickly realized what was causing it, and he rushed to set his plate down before making his way outside. The loud thumping suddenly came to a halt once he opened the door, and Bate happily smiled when the large ball of fluff he was expecting later in the day was right in front of his door step.

Kisses, a large Gao Gao who was almost the size of Bate's home, wagged his tail once he saw Bate finally appear. He gave a few playful barks and stuck out his tongue to lick him. Bate, who was now covered in saliva, couldn't stop laughing as he reached out and hugged the massive animal.

"Oh, Kisses, I've missed you so much! How's my precious little gumdrop doing?"

"ARF!!! ARRRF!" Kisses happily replied, flopping on his back for belly rubs.

"Kisses, you aren't a little pup anymore." He chuckled from his puppy like behavior. Stretching his wings, the Warrior flew onto of the pile of fluff and began petting him. "I didn't think you'd be here so soon! I didn't even get your special dinner ready. Did something happen?"

Kisses rolled back over, and gave several loud barks as he made his way to a small thicket of trees not too far from his home. Bate silently watched at the Gao Gao rummage through the foliage, and he slightly perked when the large canine looked his way and barked a few more times. Bate figured something must have caught his attention. Or maybe a gift? Last time he gave him a rather large tree stump, so maybe he found another he wanted to gift him??

"Okay, okay. I'm coming." The elder spoke, making his way to the bushes to check. An unusual sound caught his attention as he was making his way there. It sorta sounded like Kisses.....when he was still a puppy, that is. The small yaps started to get louder, and it was then Bate realized why Kisses was so eager to arrive so early.

"Puppies?! Kisses, don't tell me......"  Gently moving several branches aside, Bate gasped in surprise when he spotted a pile of baby Gao Gaos! Many were blue like his father, a few were pink like his mother, and even a pastel purple from both! Sweet Nova, there were so many, Bate could hardly count how many puppies there were!

Small yaps and barks filled the air, and Kisses gave a low growl to get their attention. The group eventually stopped playing, and looked up towards Bate. Ears raised and tails wagging, several eagerly lunged at him moments later. Bate fell back in surprise, and with a cheery laugh, the warrior beamed that he precious little Kisses is now a father. Not only that, but he went through all the trouble to show him!

One by one each puppy crawled towards him with much curiosity. Kisses looked on, but eventually let out a tired yawn and fell asleep. Bate figured handling 18 rambunctious pups took a toll on him. The least he could do is let him rest for the next few hours, while he watched over his litter in the mean time. It's been such a long time he's had his hands full like this, but Bate didn't mind. In fact, this was the greatest thing that's happened to him in years.
​-The End-
​​​​​​Artist Comment:

Kisses and his mate, Sprinkles, had puppies!!! 18 little Gao Gaos to be precise! Since Kisses is off resting, Bate will take it upon himself to name them all. <333

The Pups will not harm nor attack Bate. He is one of the few beings they trust to be around, and as they grow older, they are willing to protect him from any harm. Bate feels quite honored to have such a large group of powerful Gao Gaos by his side. They will not visit often, but when they do, they love playing fetch and getting lots of snuggles and pets from him. x) If one is sick or injured, they will seek Bate for help. Like Kisses, they are incredibly loyal to Bate. Some may even gift him little branches. (Bate has a rather large pile next to his home.)
Species © Nintendo/ HAL Laboratory
Interpreted characters created from said species © Rhylem