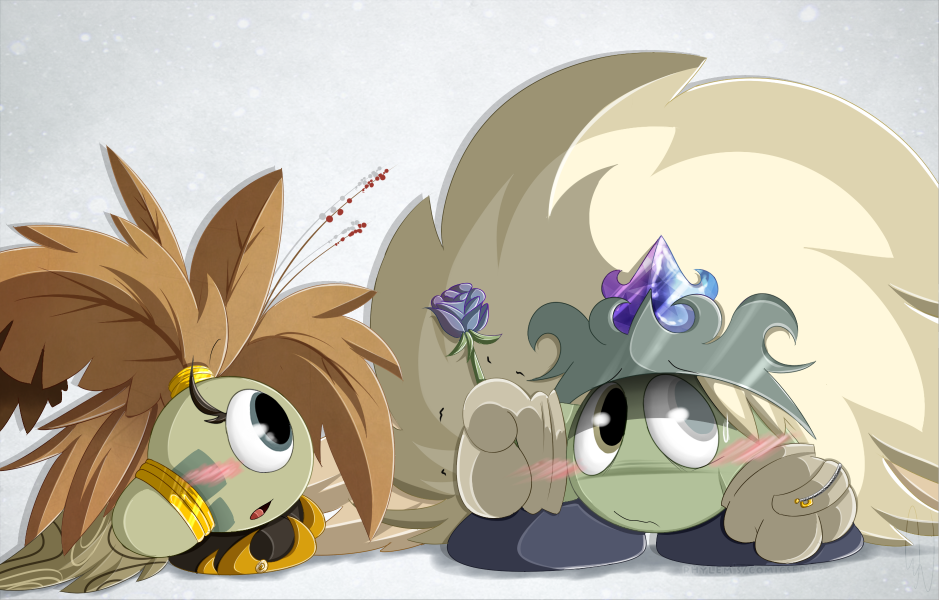 She stared up at the shaky rose Atticus held up to her. A blue rose with a slight purple
hue, a small blush formed on her face as she looked at the flustered Leo. Although he
never spoke, she had a feeling she knew exactly what he was thinking.

"I heard blue roses are often portrayed as symbols of love, prosperity,
or immortality. By the way you're avoiding my gaze right now, am I
to assume you like me?" She said, not beating around the bush.

With a heated blush, Atticus' wings fluffed up and he nervously flinched
when she said what he couldn't. So blunt. Always to the point. She didn't
even give him a chance to express how he felt! Then again, he was hoping
she'd take  the hint when he presented her with his gift. She did...just not
the way he was expecting.

She was never the subtle type, and maybe that's why Atticus couldn't
help being around her. He likes plant, she like plants- heck, she IS
a plant! She feels the way he does around them, and respects and
cares for them like he. There's just....not that many he's come to know
who shares the same mannerisms. Sure, she's more outgoing,
but that's what he likes about her. But...does she feel the same?

His train of thought suddenly came to a stop when he felt something
brush up against his cheek. Atticus didn't have time to react when
he felt her gently kiss him before pulling away. Atticus was shell
shocked. He dropped the rose and lightly cupped his cheek
where she kissed him.

"Well, I like you too." She responded when he didn't say anything.
Giggling, she picked up the rose and placed it in her hair
before taking his hand and leading him to the plaza where
everyone was celebrating Valentines Day. Atticus, still
​surprised, happily followed her - hand in hand,
​​​​​​Artist Comment:

Flustered Atti thought giving Prim a rose would be a nice gesture for Valentines Day. She caught on and didn't skip a beat telling her how she felt too. >v<
Species © Nintendo/ HAL Laboratory
Interpreted characters created from said species © Rhylem