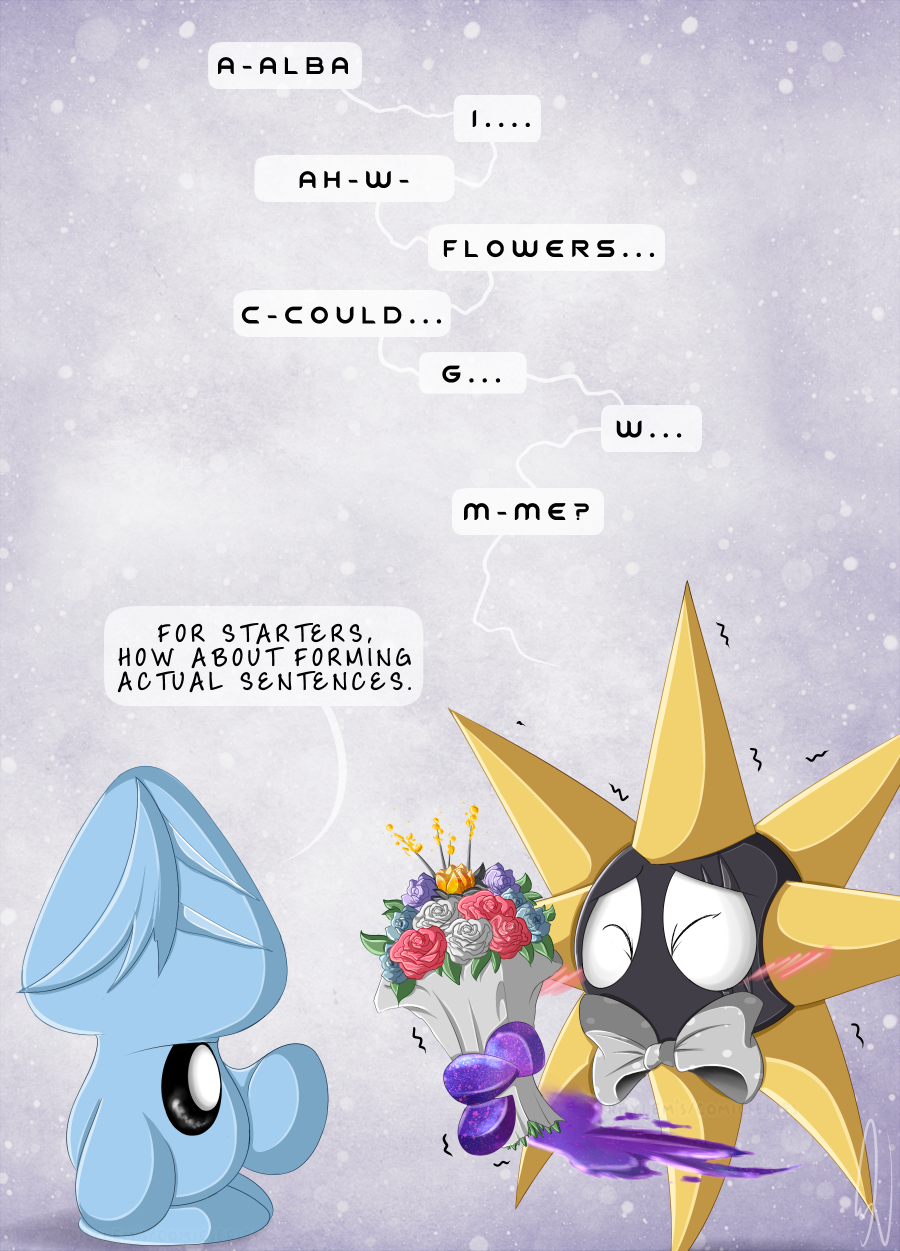 Practice Makes Perfect!
Gordon / Elliot / Alba
​
Elliot, a  hostile Squid who showed distaste to any outsider who dared step foot in the town he resides in, has come to terms that his old life will never be the same. Two notorious outsiders made a rather large impact in his small town, and to his misfortune, his sister has taken a liking to one of them. Just thinking about it would always leave a bitter thought in the back of his mind. Anywhere she was, he would be right by her side. He was her happiness, her everything, her perfect half. No. His sister deserved better. His sister should know better! For who, or what, would ever accept such a relationship?

"Yeah, yeah, I'm coming." Elliot raised his voice in hopes the rapid knocks on his door will stop. It didn't. With a frustrated sigh, he opened the door and let out an even bigger sigh when he saw who was on the other side.

"What do you want, Gordon." He tried his hardest not to slam the door and walk away.

"Elliot, I need your help." He asked, almost in fear. With hands full of market bags, his eyes darted around to make sure he wasn't followed before lowering himself to whisper the rest. "Can I come in, please?"

With a blank, unamused expression, he continued to stare at the Gordo for a bit longer before finally moving aside to let him in. In the past, he would cower at the very sight of Gordon, but after being around him for several month because of Alba, he realized how much of a pushover he really is. He lead him to the kitchen; the sounds of crinkling market bags filled the once quiet house as Gordon placed several of them on the counter. Fumbling with one of them, he quickly pulled out a variety of boxes filled with chocolate.

"Which one do you think Alba's going to like?" He opened the box and held it close to the Squids face as he pointed to each one.

"Wait, are you being serious?" Elliot spoke. "You just want to know what kind of chocolates to give her?"

"Yeah! You're her brother, I figured you're the best Squid to ask." He smiled. "I have vanilla, walnut, strawberry- OH! What about caramel?"

He was hoping Elliot would help, but to his surprise, the Squid angrily turned away.

"How should I know." He huffed.

"You seem to know every little thing about her." He pointed out. "But if not, do you think you could help me taste test them to see which one's the best?"

"Taste test them? Yeah, no." His voice faltered, shoving them away from him. His weariness didn't last long as his harsh features returned not a moment later. He turned away from the Gordo and headed back to the living room. "How about you ask Bate....Or better yet, ask Alba yourself."

"I said no, Gordon." His voice started to show a hint of annoyance. "If that's all you wanted from me, then get out of my house. And quit asking me anytime you want to know something about my sister."

"Elliot, I...." Gordon slightly hesitated. He eyed the bags of chocolate he brought over and gave a disappointed sigh. He really thought Elliot would open up just for a bit. He knew he liked her. Gordon did everything to appease him, because he was Alba's brother. If Elliot was important to her, then he was important to him. Even though Elliot would come off crude and rude to him at times, Gordon continued to be his friend. Unfortunately Elliot didn't seem to agree.

"Yeah, okay, then...." He started to gather up his things. The last thing he wanted to do is upset him- Nova knows he didn't want a broom or mug being thrown at him, so he gave a small 'goodbye' and quietly left the house.

He could hear the lock on the other side of the door click once he was outside. Gordon sighed to himself, knowing he'd have to go directly to Alba to figure it out.

"Hey, Gordy! Oh, what'cha got there?" She leaned over the bar counter to take a look. Bate and Ellie, who were enjoying a late lunch, got up from their seat to see what he brought as well.

"Umm..j-just some chocolates. I, ah...wanted to know what type you prefer. So...I, ah...bought a whole bunch we could taste them together."

"Geeze, Gordon, you didn't need to buy the whole shelf." Bate joked, shuffling through the piles of heart shaped boxes.

"Still, it's quite wholesome if you ask me." Ellie lightly giggled, opening one of the boxes before handing it to Alba. "If I remember, you like hazelnut, correct?"

"Sure do." She grabbed one from the box and started to nibble on it.  "As for the other twenty boxes you bought, I'm not sure the four of us can eat all of them. I'll keep all the hazelnut ones you have, though." She smiled.

"I'll take the ones with walnuts in it." Ellie reached over and grabbed a small box for herself, while Bate grabbed one that had a variety of different kinds of flavors.

"If everyone had their fill, I'll see if I can return the rest." He started to place them back in his bag. He eventually stopped, and gave a weak smile to Alba. Although he had a difficult experience with Elliot this morning, he figured it would be nice to give him a box too. "Do...you want to get a box for Elliot? Maybe he'll accept it if it's coming from you."

Alba shook her head, munching on another piece of chocolate. "That's sweet of you Gordy, but he can't eat a whole box on his own. He can share mine."

"O-oh, well, okay." He nodded, thinking nothing of it and continued to put away the boxes. "I didn't know he wasn't much of a sweet tooth. I guess that's why he kicked me out of his house this morning when I asked him to help me taste test some of them."

"Not quite." She mused, imagining Elliot's reaction to Gordon's seemliness nice offer.

"He'd get sick if he spent the whole day testing them for you." Bate said, "Elliot's diabetic, so I'm assuming that why he rejected your offer."

Alba couldn't help but giggle when Gordon's face flushed a bright red. She reached over and patted his spike closest to her. She knew he felt awful for asking him. "It's fine, Gordy. He's visiting tonight, so I'll tell him it was a small misunderstanding. "

"I know, but...." Gordon sadly looked at Alba, and shook his head. "What kind of friend am I if I didn't even know something as important as that? I keep saying I'm his friend, but am I really? Sweet Nova, I could've killed him. "

"Gordon, you weren't going to kill him. And of course you're his friend." Alba tried to ease his troubles. "Once he visits, all three of us can sit down and talk."

"He'd listen to you because you're his sister. He'd agree to it, but deep down I know he really doesn't. I appreciate the help, but I think need to do this on my own. I have to apologize, and...." He paused; realizing how badly he messed up. It was just this incident today, or the ones in the past. He finally understood why Elliot was so angry at him this morning.  "I need to fix everything."

"Fix everything? But Gordon-" Alba called out to stop him from leaving, but Bate slightly held up his wing to hush her.

"At sun down, Elliot tends to several bamboo plants North of Kalmari Forest." Bate spoke before Gordon had the chance to leave. "Listen carefully, and do everything he says."

Gordon didn't speak. He only gave a small nod, and left. Alba turned his attention to Bate soon after.

"Hopefully by the end of the day, you don't need to explain anything to Elliot." Bate smiled.

Alba had a feeling he knew a bit more than she did, so she gave a nod in return and decided to leave it up to him.


It wasn't hard to spot Elliot. He easily stuck out in the forest of bamboo. Calling his name, Gordon headed towards the Squid so he could talk to him. Elliot didn't react when his name was called, and continued to trim the notes strung on one of the bamboo branches.

"I'm busy." He spoke, not bothering to look back and placed another note in a woven basket he brought.

"Quit bothering me, and leave me alone." He spoke again, reaching for another note.

Gordon gave a troubled frown. Maybe if he helped, they'd be able to talk. He has three times as many hands, so it'll be a breeze! As he reached for one of the notes, he suddenly stopped when he remembered what Bate told him before he left.

"Listen carefully, and do everything he says."

Retracting his hand, Gordon lowered his head, and headed back several feet to give him some space as he quietly waited until he was done. Several hours passed, and with a basket full of notes, Elliot placed his scissors on top of the pile before finally speaking to Gordon.

"Apparently it must've been really important for you to wait here the whole time. Let me guess, Bate told you, huh?"

"Not really." He said rather bluntly. "You do an awful lot of talking, but you never seem to shut up and listen."

"I was surprised you didn't talk the entire evening. So now that you have my attention, what do you want? Is it about Alba again?"

"No, not quite. I....want to talk about you for a moment." He said, softly apologizing to the Squid. "I'm sorry for not only what happen this morning, but for everything I did that may have hurt you. Not listening, not paying attention, only talking to you when it comes to Alba. I say you're my friend, but the truth is, I know nothing about you. I get why you're so apprehensive when it comes to me...and I don't blame you. You trusted me when you told me about...her past relationship, and I gave you my word I was different. But all I've been doing is pushing you aside while I only focused my attention on Alba. I only talk to you when I need help with her, I wasn't the friend I claimed myself to be, and I apologize for that. I really do hope you can see me as a companion you can rely on in the future, if you can give me another chance."

Silence filled the air, and Gordon watched as Elliot contemplated his apology. Several minutes passed, and Elliot looked up.

"Alba likes roses more than chocolates. Pink...and blue....she also likes Moore Stardust. If you really want to impress her, maybe get her those instead."

Gordon blinked in surprise. He could barely form a proper response to the Squid across from him, so instead, he happily smiled in returned. Elliot soon returned it, and grabbed the basket as he motioned them to Alba's home.

"For someone who talks a lot, you sure are terrible at talking to her." Elliot spoke.

"What? Am not." He denied, summoning his hand to carry the large basket for him. "Just you wait. Once I pick out a nice bouquet, you'll see how smooth my words really are."

The illustration takes place the day after the literature above. It seems like Gordon isn't so smooth after all. XD He's gonna need lots of practice if he's gonna impress Alba. (Though Alba's probably gonna think it's adorable how flustered he is.) x)
Species © Nintendo/ HAL Laboratory
Interpreted characters created from said species © Rhylem